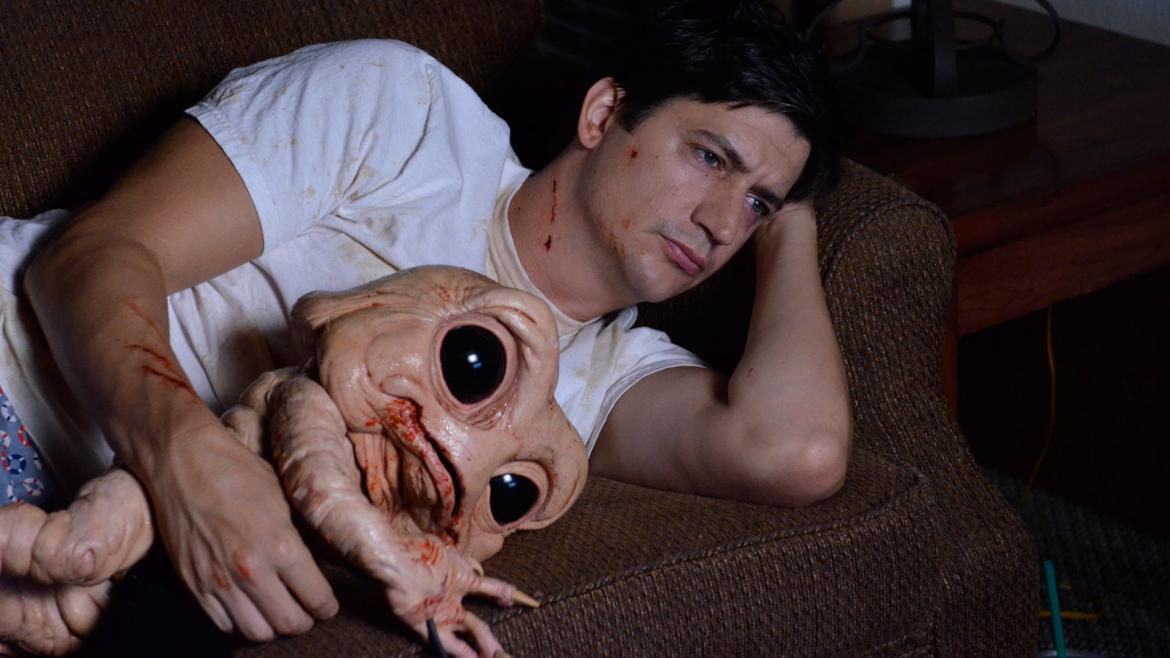 Crammed with fart jokes and explosive gore, throwbacks to Gremlins, an obsession with butts, and plenty of anxieties about manhood, Bad Milo may be the horror genre’s first Man Child flick.

At first glance, Duncan (Ken Marino, perfectly cast) doesn’t fit the profile: meek, married, and employed, this feels much more like a horror-comedy rendition of The Apartment than Knocked Up. But instead of playing Duncan as a full-grown man ground down by drudgery, Marino gives us a hapless pushover who, at his core, is overwhelmed by his failure to grow into an easygoing adulthood. His problems at work and home are legion, but they all pale in comparison to his discovery that his years of indigestion are the result of a monster named Milo who lives in his intestines, ready to burst right out of his ass and kill anybody (an obnoxious coworker, a tyrannical boss) that Duncan doesn’t have the guts to stand up to himself.

A premise like that demands commitment, and striking just the right tone; director Jacob Vaughan (who co-wrote with Benjamin Hayes) absolutely delivers on the first point. But too much of the movie is wasted trying to figure out what to say and how to say it--about fathers and sons, about “Being A Man”, about bonding with your dark side. If this seems like over-thinking a movie about a butt-demon, let’s be clear: Bad Milo spends at least one third of its runtime in a therapist’s office (the amazing Peter Stormare), and includes multiple scenes of Duncan discussing his hippie father’s abandonment and working up the nerve to--finally--challenge him directly. The grossly adorable Milo--part Gizmo, part Belial, part ET, part hemorrhoid--is clearly supposed to represent...something. What that is isn’t always clear.

At its worst, Bad Milo makes confused, asinine points about Daddy issues and backslides with disturbing ease into a weird gay panic. A climactic battle between Milo and Duncan’s wife Sarah (Gillian Jacobs) in his mother’s sex den, when she defends herself with dildos and paddles before becoming trapped in a sex swing, should have been a masterwork of raunch. Instead, so much hokey attention is paid to each detail that it feels like it’s screaming to be deconstructed in an Intro to Sexuality class. Bad Milo’s greatest moments are when it’s most purely puerile: the gruesome kills, a confrontation in an outhouse, a nightmare about farting (among other things) in a doctor’s face, and the brutal castration of a dickish fertility doctor. It is absolutely worth seeing for those scenes alone. But for all the things Bad Milo has up its ass, maybe its head shouldn’t have been one of them.