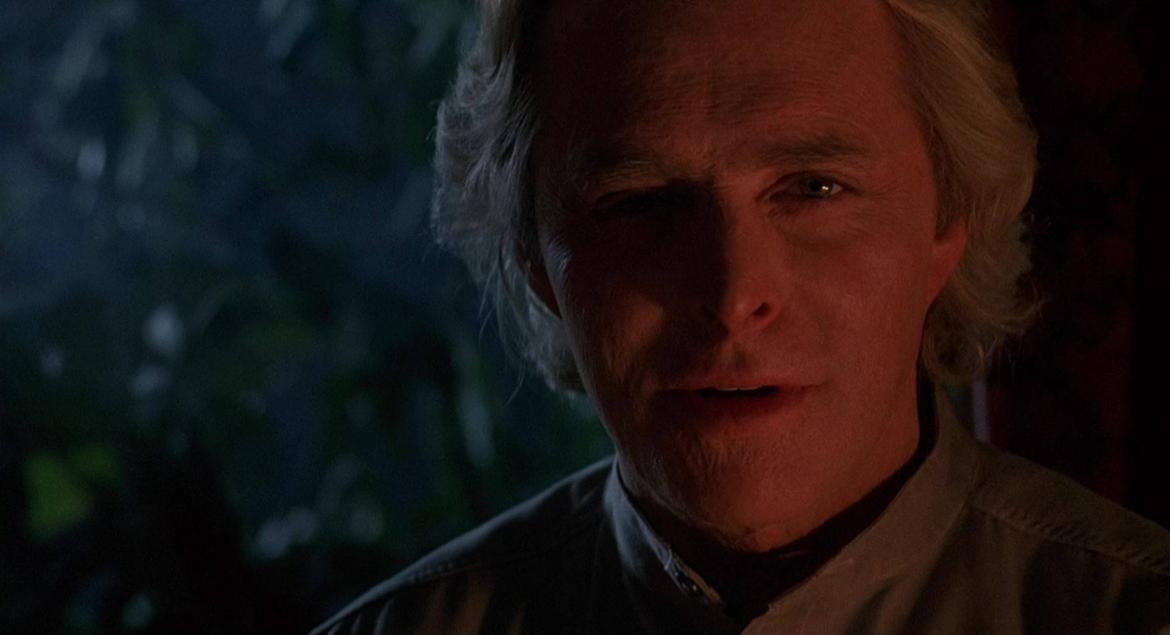 1988's Bad Dreams opens on a desert compound in 1975, where charismatic cult leader Franklin Harris has gathered his flock for one last, fiery sermon. Harris has decided it is time for him and his followers to move on to the next stage of being. He proceeds to baptize the group (in what we later learn is kerosene), and lights a blaze intended to kill everyone in the house.  He almost succeeds with the exception of a young woman named Cynthia, played by Nightmare on Elm St. 3's Jennifer Rubin.

Cynthia wakes up 13 years later to an astonished hospital staff, unprepared for her return to the living world. Her rehabilitation quickly hits a snag when strange things begin happening all around her. She has repeated visions of Harris, sometimes in full burn makeup. Even more ominous, the residents of the hospital begin dying one by one, all by apparent suicide.

Bad Dreams is a creepy film, and a lot of that credit is owed to Richard Lynch's teeth gnashing portrayal of the charismatic cult leader. He's all at once patronizing, charming, and insidiously friendly, all the while sporting a Hannibal Lechter smile that says 'I can eat you at any minute.'  His repeated appearances to Jennifer in the hospital become some of the most unnerving moments in the entire film. He's so creepy, that you get the feeling he doesn't really need the burn makeup to make these scenes every bit as terrifying as they can be.

This is director Andrew Fleming's debut film, a few years before he would make a bonafide horror classic with The Craft. Even here, he shows a gift for suspense and atmosphere. It's a more adult, mature form of storytelling than you might expect from a late 80's horror film, but it's also not above the tropes of the time. The gore is plentiful and inspired. 80's staple Dean Cameron, seen here in a rare dramatic role, puts a knife straight through his hand at one point and the camera doesn't flinch for a second. In one particularly memorable scene, a couple commits suicide by diving into an industrial fan. The ensuing carnage sees buckets of blood, organs and body parts pouring from every vent in the hospital, of course dousing our lead heroine in the process. This sequence will undoubtedly be the moment that sticks with most viewers after their first watch.

Although moody, tense and mostly well made, Bad Dreams is not without its faults. It features a bizarrely inappropriate love plotline between Cynthia and her doctor, played by Reanimator's Bruce Abbott. Given what we as a society are finally starting to absorb about power dynamics, this love angle is at best misguided and at worst abusive.  Abbott is ostensibly supposed to be the hunky hero, but his willingness to throw all professionalism aside to pursue Rubins' Cynthia completely throws off his character dynamic. It's made worse in the third act, when he starts to make some truly bizarre decisions. We're supposed to believe this may have to do with the supernatural influence of Harris' dead cult leader, but a rather shakily handled reveal during the finale throws this assumption into question.

Bad Dreams feels ambitious in hindsight, but even moreso when you consider it was released during a time in horror history when slasher sequels still ruled the day. It's an adult story attempting to tackle weighty subjects like grief, cult dynamics, and post traumatic stress disorder. It doesn't stick the landing on everything it's trying to do, but it gets it right enough of the time to be a standout film of its era. As a bonus, if you're a fan of The Craft, it also serves as a pretty compelling companion piece.