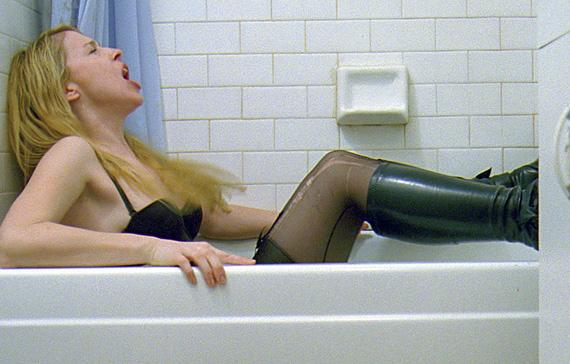 Although it may come as a shocking surprise to those spoiled individuals born under the sign of the digital versatile disc, filmed entertainment was a lot harder to come by when yours truly was warming a seat in the American public education system. Instead of Internet bootlegs and overseas Region-Free DVDs, we had second and third-generation VHS recordings distributed by several great mail-order companies and hundreds of unique individuals at flea markets all across the nation. The tapes themselves were often blurry and jumpy and dubbed in EP, but none of us really seemed to care as long as the film was complete and intact.

If you were among the fortunate during the 80's and early 90's, your parents had cable television. And if you were very fortunate, they were Cinemax subscribers. For whatever reason, my parents had cable. More importantly, they had Cinemax. Many a late night was spent mindlessly consuming vast amounts of softcore porn, obscure sex comedies, and B-grade horror films distributed by companies which, I'm sorry to say, have slipped from memory and into the inky black void of history. It was here, in this great cinematic wasteland, that I accidentally stumbled across Frank Henenlotter's deliciously warped Siamese Twin shocker "Basket Case," a film that would forever alter my perception of what horror could be. All of my friends hated the movie; I, on the other hand, adored it.

For the past seventeen years, Henenlotter has remained strangely quiet. A few rumors found their way onto a few websites a while back, but they ultimately amounted to a title ("Sick in the Head") and a rarely updated IMDb page that contained scant amounts of information - nothing more. My ensuing excitement eventually dissipated, and I was sure the man who redefined my definition of horror had disappeared forever into that bottomless world of horror-related obscurity. In fact, it wasn’t until a friend sent me a link to the MySpace page for “Bad Biology” that I found out that Henenlotter was working on something new. What’s more, it was already in the can.

Have these years away from the camera dulled the director’s ability to shock, disturb, and entertain? After all, a lot has gone down in the fickle realm of horror entertainment since “Basket Case 3” made its debut in 1992. This is, perhaps, the weirdest thing about “Bad Biology.” Not the beastly genitalia. Not the film’s wacky, off-beat sense of humor. Not even that mind-blowing final shot, the one that’s sure to molest your thoughts for days on end. No, it’s the fact that Henenlotter picks up immediately where he left off, as if all those years out of the game meant nothing at all. Is the film the best he’s ever made? Not quite, but it certainly fits nicely with his strongest.

Working from a script co-written by New York City rapper R.A. The Rugged Man, Henenlotter weaves a violent and borderline pornographic tale of a biologically unbalanced woman's neverending quest for sexual gratification. Her problem, it would appear, stems from a highly unusual genetic disorder: unlike most women, this troubled young lady was born with seven external clitorises, with dozens more dwelling on the inside. This insatiable woman’s late-night carnal adventures soon lead her to the home of a distraught young man whose abnormally large genitals have taken on a life of their own thanks to several intense years of steroid abuse. Is this a match made in heaven, or is their inevitable union a recipe for unholy disaster?

The film’s abundance of over-the-top special effects are delivered courtesy of Gabe Bartalos, the gentleman responsible for the unspeakable juiciness found lurking within most of Henenlotter’s previous efforts. His work here in on a much smaller scale, as the vast majority of the imagery is handled with computers. As it goes with most low-budget productions, the CGI is of varying degrees of quality. Regardless of how you may feel about the overall presentation of the effects, chances are you’ll love the picture’s last second money shot. It’s not particularly well done, mind you, but it’s hilarious and jaw-droppingly foul all the same.

Is “Bad Biology” the comeback we’d all been hoping for? Well, yes and no. It’s an uneven film, for sure, though the positives grossly outweigh the negatives. The performances are coated with the appropriate amount of campiness, the sleaze/gore factor is through the roof, and Henenlotter’s trademark sense of humor is accounted for. Had the numerous sex scenes and unchecked nudity not seemed like pointless filler inserted to flesh out an overlong short film, “Bad Biology” would have been much, much stronger for it. As it stands, a very fine film worthy of its eager audience. Welcome back, kind sir - you were sorely missed. My only request is this: Could I possibly get one more film before I hit forty? Pretty please?