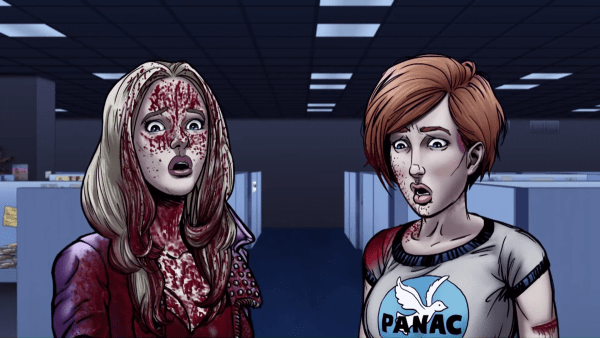 To Your Last Death (Movie Review)

Why is it that adult themed animated horror hasn’t caught on? There are pieces of the genre that have been expressed through animation and succeeded, but few can claim to have ever truly broken through to the mainstream. Perhaps it’s a stigma that fear is not as palpable through an animated conduit, which is more or less the biggest issue with Jason Axinn’s To Your Last Death. Ultra violent with lightning fast pacing, the film certainly doesn’t lack for imagination, but you’ll be hard pressed to care about any of its two-dimensional offerings.

The closest approximation of the animation style here would be FX’s Archer. Characters have an unconventional array of movements that at times feel like fine detailed pieces of paper filmed in an ultra smooth and seamless stop motion. The animation is an interesting concept in and of itself, and the story it’s presenting too has endless possibilities. Centered on Miriam (Dani Lennon), she and her siblings are mercilessly sentenced to torture/death at the hands of her father, Cyrus (Ray Wise), and his various thugs. Miriam survives and meets a Mysterious female figure known as Gamemaster (Morena Baccarin) who gives her the chance to relive that day to try to change the outcome—and it restarts every time she dies. The deal comes with strings attached as the entire loop is part of an isolated moment in time being bet on by a godlike race and Miriam must keep the action to the Gamemaster’s liking in order to close the loop for good.

Ripples of the genre echo through To Your Last Death and it’s apparent we’ve seen ideas like this before. Recent offerings such as Happy Death Day come to mind, combined with aspects of The Cabin in the Woods. The presentation provides a video game feel as our heroine is awarded a “infinite life” cheat code in a one location and the motivations of the players are constantly evolving. As an exercise in creativity the concept reads like a slam dunk, and yet the animation and storytelling feels a bit disconnected from the overall experience.

The art style is very stark and detailed almost like a Grand Theft Auto graphic novel, especially with some of the character design. However, there’s no weight behind its stylish violence which also undercuts the attempt at an emotional story arc for Miriam. The writing is hardly doing it any favors as Miriam’s interactions with Cyrus’ thugs feel like discarded real world sociopathic Batman villains spouting cringey on-the-nose dialogue. Then there’s the otherworldly gamblers demanding showy bloodshed that provide a sense of macabre fascination, but ultimately they tend to clog and overcomplicate the story. Still, the violence and art style carry enough intrigue and personality that you may not be able to help wanting to go along for the ride just for the sheer spectacle of it all.

To Your Last Death provides audiences the safety of a video game checkpoint. Navigating the film’s brisk runtime involves little risk, but could potentially reward those looking to explore something new. Jason Axinn’s experimental animation is a unique peek into the possibilities of what adult oriented horror animation could be. It just needs a little more method behind the madness.