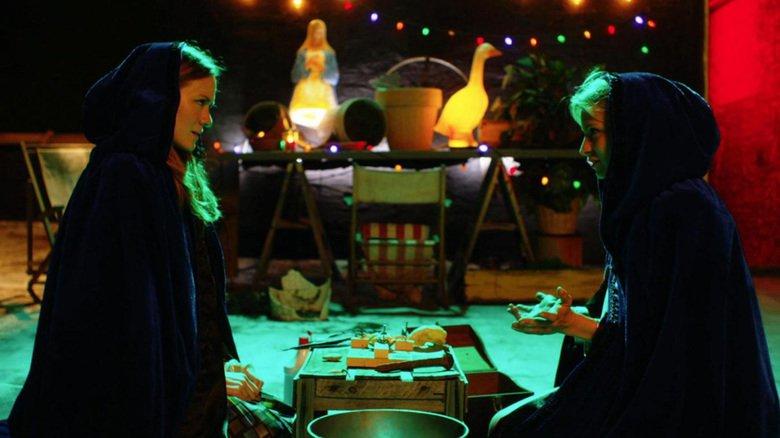 With a number of unoriginal exorcism flicks plaguing the theaters as of late it is evident now more than ever that the genre needs a swift kick in the balls. The question being, where do we start? At this point it seems like almost everything that can be done has be done- or has it? Ava's Possessions has emerged from the dark corner of exorcism cliches to deliver something that's at the very least different even if it's probably not the savior of the genre.

Taking place AFTER the successful exorcism of Ava (Louisa Krause), the film focuses on the after effects of what such an experience would entail. After a 28 day bout with being possessed by a demon Ava's first question is rather or not anyone bothered to call in sick for her while inflicted. Additionally, Ava is set up with a lawyer to get a grip on the consequences of her actions while under the influence of the demon. To avoid the stiff penalties she is saddled with the Spirit Possession Anonymous program (basically AA for people who've been possessed). In the program she will come to terms with why she was possessed and how to move forward. However, while making her way through the steps she finds that maybe everyone isn't being fully honest with what happened during her possession.

Jordan Galland's film approaches the topic of possession and exorcisms in a fresh and funny angle. Instead of using the genre tropes as a means to farm out jump scares, his script pokes fun at them. It's rare to find a film that tackles the aftermath of a successful exorcism- seeing as how filmmakers see the greatest potential in the act itself. Ava's Possessions wants to have the best of both worlds by using the psychological effects as a way to explore a number of possibilities affecting those who have survived. The best being in a character who actively wants to invite her demon back and learn how to control its effects on her as she's never felt more alive than when she was possessed.

Galland's script also asks some pretty cool questions as to how people become subject to demonic possession. The real issue of it all being that the approach sometimes dips the quality of dialogue into wannabe Diablo Cody levels of "hip" comedy. To complicate things further, the tone sometimes switches on a dime from being heavy on comedy to attempts at being semi-serious at levels which make it hard to pin down. Проекты домов З500 - http://z500proekty.ru/doma/tag-osobnyaki.html

Anchored by a solid lead performance from Krause, Ava's Possessions is a fresh take on the possession subgenre. Had Galland used his perspective to find a truly unique voice of his own the film could have exorcised the mediocrity out of an increasingly struggling genre to a greater degree.