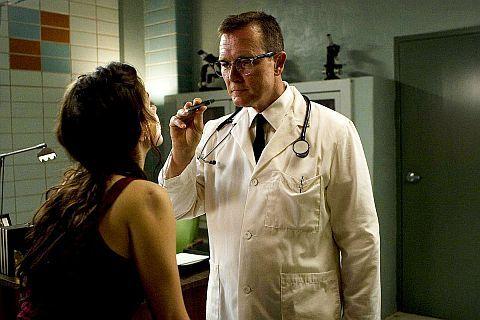 A group of twenty-somethings party it up in New Orleans for Mardi Gras. Heading home for the night they happen across a man in a hospital robe in the middle of the road. Swerving to avoid him they careen off the road and slam headfirst into a tree. Shaken and banged up, the group of friends mill about aimlessly as they ponder what to do.

Soon, an ambulance shows up out of nowhere in search of the patient that is now trapped under the wreckage of the car. Seeing the banged up group of friends, they offer to take them to the hospital as well as to get checked out. Once they arrive at Mercy Hospital, the scene is a bit off as the hospital appears to be empty except for the ambulance crew and the head nurse. As they are called off one by one to be checked out by Dr. Benway, the friends soon discover they may have been better off back at the scene of the accident.

"Autopsy" wastes no time in getting strange, which is more than a bit refreshing. The entire sub plot of Mardi Gras is handled in the opening credits and manages to setup enough back story up to connect you to the main characters. That's the key to enjoying "Autopsy"; there is no lengthy character development to weigh the film down. This is handy considering the film does manage to bog down some in other aspects.

There's no questioning the fact that the main draw for "Autopsy" is the gore. It is plentiful and creatively done and produces some great cringe-worthy moments. Be it Michael Bowen's psychotic violent spurts or Robert Patrick's antics as Dr. Benway, the blood and guts flow liberally.

The main catch here is that with so much love given to these aspects, the plot often plays second fiddle. There are times when the stretch between murders feels like a slog through heavy syrup, and that's never a good thing. With the development of our main 'good guys' handled so well, it's off putting to see the cast of misfits handled in such a way. We know there is something not right in this hospital from the moment they arrive. They just take too long to show us what the issue is.

Once they do get there however, "Autopsy" manages to redeem itself in both makeup work and story. Dr. Benway is highly cryptic and there are many hints as to how he arrived at Mercy Hospital. It's enough to keep the viewer intrigued and for the most part hold your attention. They do slip up a little as they give us a heavy handed potential sub-plot concerning Dr. Benway's shady past, though in the end they never do much with it.

Outside of the genre stalwarts that are used to good effect, the majority of the cast here is capable in their craft, though ultimately forgettable once the credits roll. Jessica Lowndes of TV's '90210' rehash handles herself well as a strong yet scared female lead without being screechy. Too many times do we see a lack of sense in our female leads when it comes to independent horror but such is not the case for Lowndes. She makes believable and logical choices in the face of fear and it's nice to see such qualities brought to life.

The rest of her band of friends however manage to be nothing but set pieces for the remainder of the movie, even though they don't really do anything to turn you off from them. The veterans are the real draw for "Autopsy" and they are used quite well. Michael Bowen is no stranger to the horror genre and I dare say he has the most memorable roll of the film. Playing an ex-con turned nurse, he exudes an aura of being 'off' from the moment he appears on screen. Twitchy and brooding, you know there is a violent streak to the man and he never breaks character. It was outright fun to watch him work. Robert Patrick has begun to make his name in horror as well. He does a decent job here as Dr. Benway with just the right amount of neurotic tendencies and stiffness needed for the role. Though he did not stand out as much as Bowen, he did fit the role of stodgy old doctor quite well.

"Autopsy" is a fun flick for those looking for a fairly mindless gore fest. There are pacing problems early on but they quickly disappear as the blood and guts ramp up. It truly is worth it to see some of the ways that the characters are killed in this movie, and that should really be your entire reason for watching.