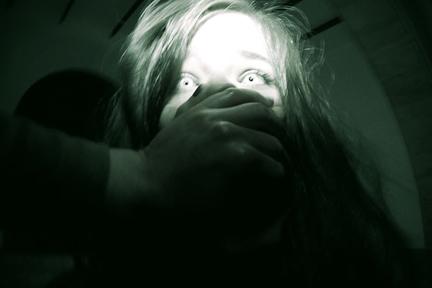 "Paranormal Activity" seemed to spawn a dozen copycats almost overnight with its massive success in 2009. The low budget, haunted house, easy to make found footage format was easily replicable for amateurs and studios alike. "Atrocious" appears at first glance to be a Spanish stylization of the film until its abrupt final twists rip off "The Shining" with such audacity its hard to fathom.

The story plays out from a past perspective, as we watch "police evidence" that has already happened. The story goes that on April 4th of 2010, the Quintanilla family was found murdered in their lavishly decrepit vacation home in Sitges. Mother, Father, youngest son Jose, and older siblings Cristian (Cristian Valencia) and July (Clara Moraleda) all retreat for some alone time together. Cristian and July spend their time investigating a local legend about a missing girl through hand held cameras day and night, while Jose plays with the family dog and the parents are infrequently present. On the fifth day of their arrival they were found dead under strange circumstances.

The film begins in high speed rewind showing us glimpses of the events to come, intermittently pausing on seemingly important images or scenes. It lacks originality but also engages the audience immediately. What follows after is a 75 minute slog through a very creepy house and hedge maze lifted directly from the Overlook Hotel. Consistently keeping the audience in the dark, "Atrocious" begs you to buy that its payoff will be worth knowing absolutely nothing throughout the entire film. There are no glimpses of a villain, no mysterious apparitions, nothing outside the corpse of the family dog that really elevates any sense of dread. Even the death of the pet leaves much to be desired as the characters reactions don't elicit any real fear from the cast, just shock.

On the bright side, the setting is superb. Almost to the point that it feels like the film was constructed purely to exist in this deliciously frightening house and maze. The old fashioned Spanish architecture and foreboding basement offer an interesting idea of what's to come, even if the basement seems directly inspired by "Cabin in the Woods". But the problem with the location is purely execution. The much hyped maze and basement are visited far too frequently and lose their mystique through detail before the climax. Even though darkness creeps in for final act chaos, the sense of dread is muted and the camerawork poor and confusing.

It's rare that a film with an adjective for a title can describe the viewing experience as well. Yet, Fernando Barreda Luna's "Atrocious" accomplishes this feat in spades with a worn out premise, wasted setting, and an exhaustingly paced narrative. A 75 minute film should never feel like a chore to watch, but constant shots of empty spaces, a razor thin plot, and generally boring characters anesthetize the viewer to the charm that could've existed.