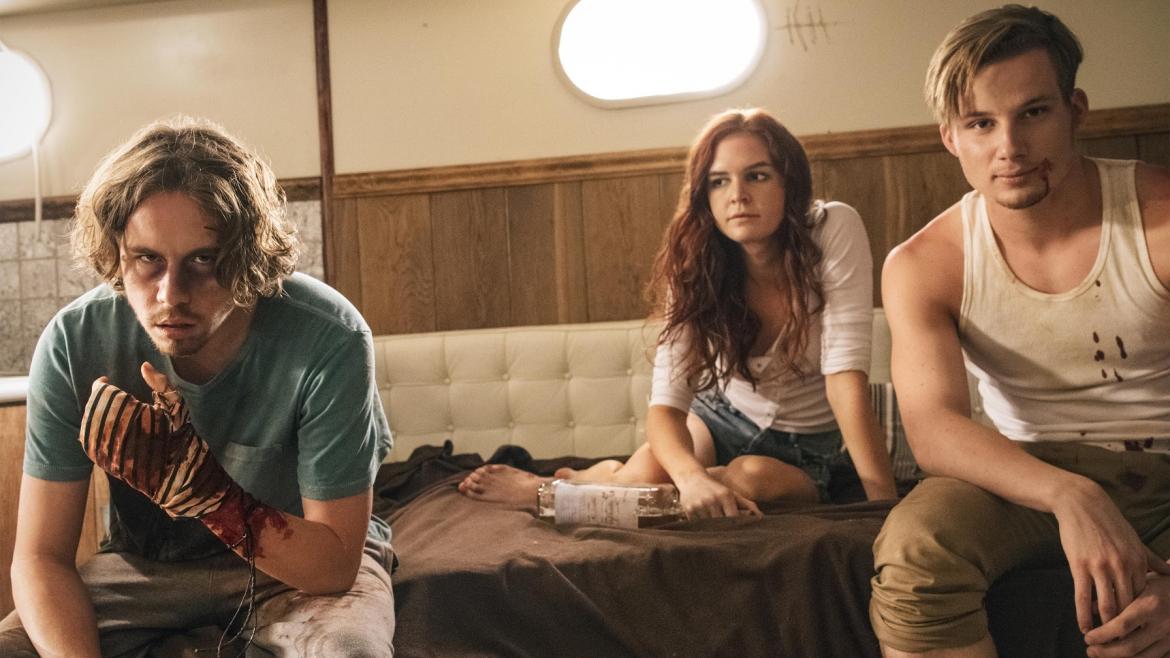 Often when we think of movies featuring voice-over narration and characters lost at sea we’re reminded of something like a classy, existential tale of an old man brooding and fighting the elements in order to survive. Harpoon is not that kind of movie. It surely features hilarious narration by Brett Gelman, but a classy tale of man versus nature this is not.

Welcome, to the worst friendship of all time. Richard (Christopher Gray), a spoiled rich kid with a powder keg temper, brings his best friend Jonah (Munro Chambers) and girlfriend Sasha (Emily Tyra) on his yacht for a day trip as an apology for his latest outburst of rage and jealousy. Almost immediately the exclusion is cut short as a boiling pot of sexual tension and secrets erupts and the trio finds themselves stuck on the yacht too far from shore to swim with a copious amount of personal and situational issues threatening to tear them apart.

While not reinventing the wheel for isolation thrillers, Harpoon finds a fresh lane by utilizing a pretty wicked sense of humor to undercut a most dire situation. Tonally, it never quite settles for straight up black comedy and outright silliness, so the marriage of the two often creates a unique tension while never derailing the bizarre sense of fun to be had watching these three squirm at all the dirty laundry being aired. Particularly, a scene involving a bottle of scotch and sexual prowess provides a nice anchor of some of the humor transitioning to the final act.

Chambers, who people may recognize from 2015's Turbo Kid, is the most seasoned actor amongst the trio with Gelman lending his recognizable voice to the narration. However, it's Tyra who provides the film's standout performance and Gray embodies the spoiled rich kid with vaguely jockish and toxic masculine tendencies fairly well. The chemistry between them is what really sells the film as they genuinely feel like friends going through a falling out. When the secrets start boiling over, the tension ratchets up even while you're laughing at the script from Rob Grant (who also directed) and Mike Kovac. Add in the various sailing superstitions pointed out in Gelman's narration and you're treated with an uncomfortably fun comedic survival thriller.

Docking at a lean 82 minutes Harpoon balances dark humor with humanity's violently seedy nature having fun with all the unpleasantness of its situation. Not the first nor the last to take a genre friendly approach to toxic masculinity, Rob Grant's nautical friendship-gone-awry thriller is the most fun you'll have watching three people drink pigeon's blood.