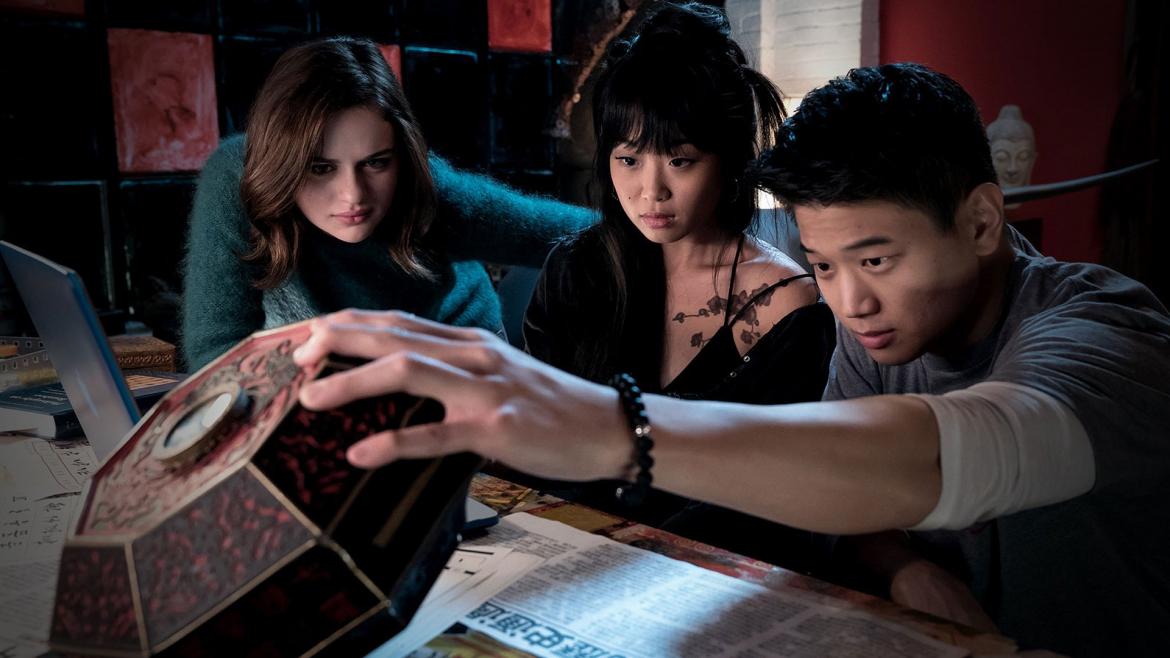 Wish Upon is the kind of movie that makes old folks – this reviewer counts himself as a member of this demographic – very nervous. Not because it’s subversive or dangerous or so hip that our aging brains can’t cope with it. No, what makes Wish Upon so unsettling to us is that it perfectly depicts all of our fears and prejudices about young people. It feeds directly into our belief that they are so irresponsible and selfish that, if given unlimited power, they would waste it on the utterly trivial.

Proving this point is Claire (Joey King), a high school student granted seven wishes by a mystical Chinese music box that her dad (Ryan Phillippe) finds in the trash one day. Ostensibly, Claire is supposed to be our hero. She's a dorky kid who just wants to fit in, feel powerful, and all of those other things teenagers crave. However, she already has a nice group of friends and, moments after we meet her, she beats the snot out of a bully. So, mission accomplished, right? Not hardly. See, aside from being our hero, Claire is also kind of insufferable. She doesn’t have the right friends and doesn’t feel powerful enough, and her dad isn’t the right kind of cool. So, once that music box turns up, Claire – who is totally unimpressed by it – unleashes a series of self-centered wishes. However, there is a blood price to be paid before her dreams can come true.

The movie’s wildly low opinion of teenagers is baffling because those are the people to whom it should be pandering. It’s hard to imagine anyone outside of that age group who will find much to like about such a derivative, glossed-over re-telling of classic horror tropes. And yet, there the movie is, rolling its eyes and going “Kids, amirite?” during a scene where a pair of high school bullies are shown to be so devoid of self-awareness and human consciousness that they try to raise money for a fallen friend from those they used to torment. Then, in a move that feels just as confused but for different reasons, the ex-victims relentlessly mock the bullies for trying to help a friend.

Wish Upon would have been more watchable had it leaned in to its inspirations a little harder. Only one of Claire’s wishes comes with a sinister “The Monkey’s Paw” twist while the film often teases Rube Goldberg, Final Destination style kills but rarely delivers. By stripping out most of this potential for creative and bloody fun, Wish Upon will have to wish its only audience – slumber party attendees – never realize who the joke is really on.