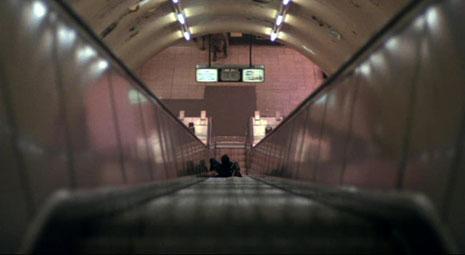 The werewolf taps into those ever constant horror themes that can easily work in many given contexts: bodily control, the uncanny combination of human and inhuman forms, instinctual nature and astrological influences, fear of the “other” and abject within ourselves, infection and spread of disease, etc. Like any of the long-standing horror mythologies that have made their way into cinema the exemplary werewolf stories utilize this literal transformation of person into wolf for dual means. As the cinema provides the capacity to graphically represent these transformations visually and aurally, we are provoked to physically react with repulsion and curiosity. We are compelled to turn away from and invited to marvel at the process of change the body goes through. Like any number of horror myths like these we are capable of finding pleasure in our ability to desire—or at least empathize with—what terrifies us. From this perspective, we can see the origins of werewolf horror as being grounded in the myth’s potential to string out the pleasure of our own helplessness in the face of instinctual impulses.

“An American Werewolf in London” is film interested in exploring this conflicting experience of a werewolf that is both terrifying and cathartic for its audience. The film has been widely embraced as an exemplary piece horror cinema. Along with “The Howling” (1981) and “The Thing” (1982), the film is cited as an important historical transition in the way horror is shown to the audience through the plastic manipulations of effects work. The surging popularity of Fangoria as a publication for cinephiles at this time further highlights the increased level of familiarity audiences were acquiring on the technical processes of special effects. As film historian James Kendrick has shown, Hollywood in the 1980s saw an interesting shift in how horror and representations of violence encountered simultaneous efforts to dilute their impact but continued to depict increasingly explicit renditions of corporeal violence. It is within this context that director John Landis crafted a bizarre film that juggles comedic and horrific elements with an adept hand, building the security of a laugh only to violent strip it away in the next frame.

David and Jack (David Naughton and Griffin Dunne) are two American students traveling around Europe. Beginning their excursion in the rural communities of northern Britain, the pair enters the small town of East Proctor where they stumble upon a local pub with a pentagram painted on the wall. After prodding a little too much for information, the local clientele sends them on their way as howling is heard in the distance. Walking through the moors, Jack is suddenly killed and David wounded by what looks like a large wolf. Three weeks later David awakens in a London hospital where he is recovering; all the while having vivid, violent dreams of running naked through a forest and devouring deer raw. David strikes up a romance with nurse Alex (Jenny Agutter) who brings him home after he is discharged. Rather unexpectedly, David is visited by Jack’s decaying (though every optimistic) corpse who warns David that he will transform into a wolf at the next full moon. Jack tells David that he must kill himself to save the lives of others and lift the werewolf’s curse, allowing Jack to rest peacefully.

In “Hollywood from Vientam to Reagan…and Beyond” film theorist Robin Wood has claimed that “An American Werewolf in London” is primarily about the impossibility of Jack and David’s relationship. Wood has characterized the film as a piece of cinema that makes quite literal the inability of Jack and David to remain as companions as Jack’s body continues to decay throughout the film. And while the inclusion of Alex as a sexual partner for David further supports this argument, I feel this reading of the film ignores too much of where the film’s presumed appeal lies.

The film revels in the quasi-pornographic pleasure we take in the effects work and violence of horror films in general. I do not mean pornographic in that clichéd derogatory sense but in the appeal of witnessing bodies perform and function on the edge of control. The werewolf transformation sequences here can be viewed as the equivalent of sex scenes. That we watch Alex and David make love to Van Morrison’s “Moondance” and then a few scenes later, witness David transform into a wolf scored to a Sam Cooke rendition of “Blue Moon” is particularly indicative of this theme. Both sequences seem superfluous to the narrative but are integral to the film as a whole. The sudden tonal shifts between outright terror and hilarity also speak directly to our bodies as audience members which, much like lycanthropy, are susceptible cinematic cues in both controlled and uncontrollable ways.

If the film has one glaring weakness it is found in Alex’s characterization, the matronly nurse who is equal parts caring Madonna but still puts out for David. Agutter does her best with what she is given and she does inject some charm into her character. She is give so little to do besides worrying for David and have sex with him that she is easily forgotten when considering the film’s larger interests. For the last half of the film Landis seems unsure of what to do with Alex, continually cutting to shots of her stating how worried she is and then cutting back to the action propelling the narrative.

Why “An American Werewolf in London” endures is less an accomplishment of revamping the werewolf myth, than it is Landis’s ability to tonally frame the irreconcilable drive toward narrative conclusion through violently expelling the monster and the film’s inability to continue after this expulsion. *(Spoiler)* That the film suddenly ends with an image of David’s death and the dissolution of the werewolf’s curse is a gesture which points to the previously mentioned duality of the werewolf informing the audience’s experience. The film requires the final catharsis and removal of the monster but it also embraces the necessity of the monster in order to exist.