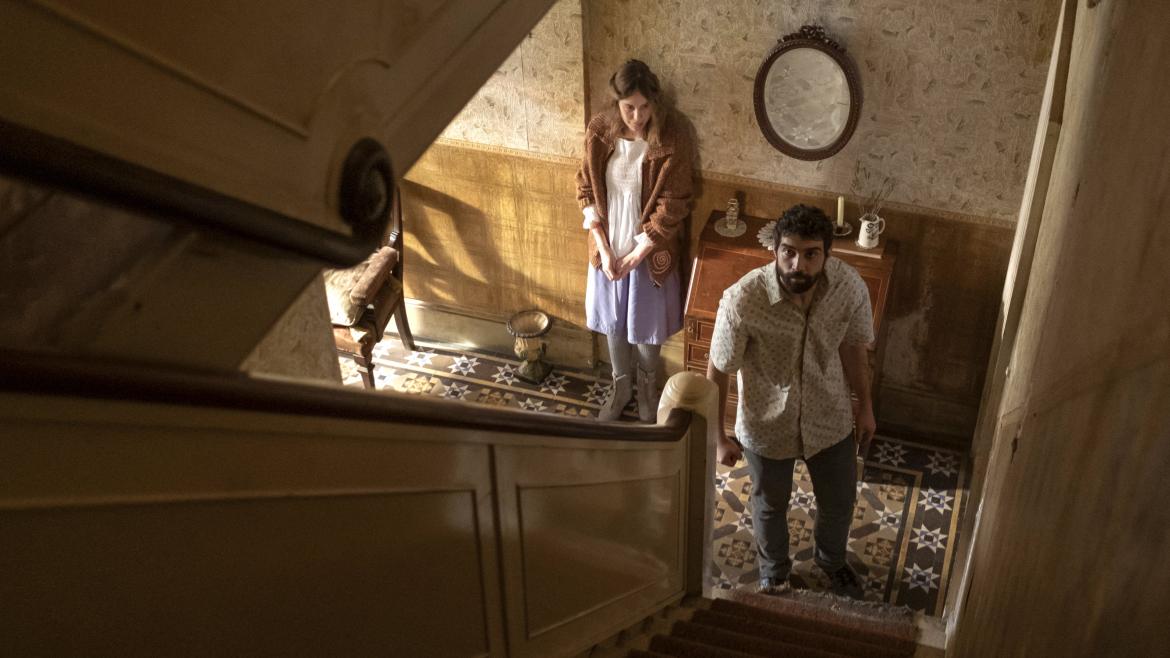 If you enjoy films that prize theme over plot then do I have a revenge tale for you. Amulet is the debut feature of writer/director Romola Garai, a prolific English actor whom I enjoyed in the 2002 Nicholas Nibley opposite Charlie Hunnam, but that is a very different story and lacks the substantial amount of vengeance and demonic tomfoolery present here.

A former soldier and day labourer, Tomas (Alec Secareau), is taken in by a nun, Sister Claire (Imelda Staunton), to live as a handy person for Magda (Carla Juri) and her mother. As he falls for Magda, the film interjects flashback scenes from the Yugoslav wars and Tomas's past. As Amulet unfolds it is clear that something else is going on with the "Mother" living upstairs.

Disorienting and requiring your undivided attention, Amulet is better suited for an art house theatre experience than the 2020 home viewing atmosphere rife with distractions. The movie relies on a conflicting structure that explains too much--mostly by Sister Claire who is dragged in to break things down to the audience--while also asking its audience to follow the offhand character comments. There is an overwhelming sense of dread in the movie with a pace that burns so slow you might think the match went out. The pay off is there, but in the words of Sister Claire it, "comes so quick."

It was not lost on me that Tomas is reading Hannah Arendt’s “On Violence” essay (1970) in one of his introductory scenes. In that work, Arendt distinguishes between the concepts of violence, power, force, strength, and authority. I will not go through each, but the film subtly highlights its views on the abuse of authority to perpetrate violence against others. Amulet portrays the effects in metaphor showing that trauma (a demon) follows both parties when actions of ethnic cleansing/war rape are taken. However, from Garai's admission, the film is about whether forgiveness is essential and what that looks like for the victims who must constantly forgive. In some ways this film is a rape-revenge story that reflects the loss of bodily autonomy, safety, and control onto the victimizer as their punishment.

Formally the film is well made but it lacks a distinctive visual language. Outside of a few choice shots, the cinematography is fairly bland and straightforward. Long stretches of the film feel as empty as the house we are exploring while the editing feels jumbled in places to add energy the performers aren’t quite bringing. Where Amulet excels though is in its sound design and the choral soundtrack, which are disheartening and reflect the anxious mood in the home.

Many may find Amulet too dreary, but instead I found it refreshing to have a pure revenge instead of a redemption story. Overall, a movie that some will embrace with their bat wings and from which others will shriek and fly as far away as possible.