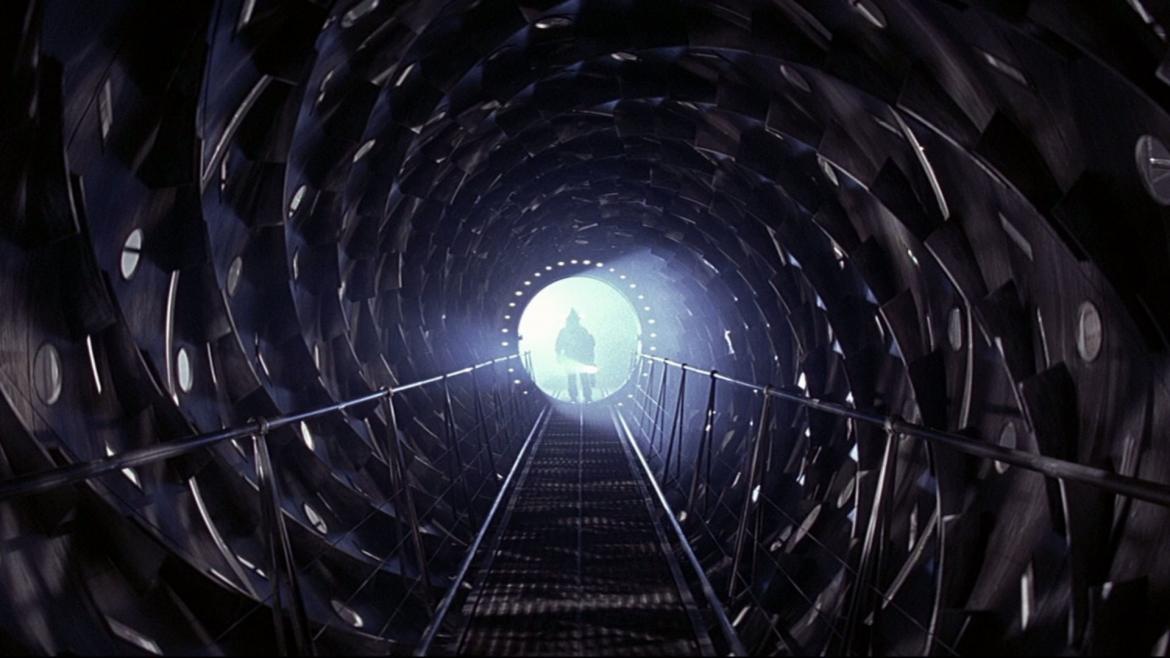 In an episode of Party Down, the cranky fanboy Roman explodes when another character fails to distinguish between the vampire-populated fantasy she enjoys and the “hard sci-fi” he’s unhealthily obsessed with. Event Horizon brings out my inner Roman, because its limitations and strengths are best explained when you accept that, although it takes place in outer space, in the future, and on a ship named after a concept from general relativity, no less--it’s not really a science fiction film, but an old-fashioned horror allegory.

At some point in the mid-21st century, the spacecraft Event Horizon explodes on its way to Proxima Centauri. Seven years later, its creator, Dr. Weir (Sam Neill) is placed on the ship Lewis and Clark and reveals mid-mission that this tragedy was all a cover-up for something far stranger. In actuality, the Event Horizon was an experiment in interstellar travel, and it lost contact while attempting to create its own wormhole. But it has recently reappeared, seemingly abandoned, in the outskirts of the solar system, and the Lewis and Clark must intercept it.

The crew of the Lewis and Clark, led by Captain Miller and Lt. Starck (Laurence Fishburne and Joely Richardson) dock with the Event Horizon and discover evidence that the crew was brutally slaughtered. Their instruments pick up all kinds of anomalies, from bizarre audio recordings in Latin to readouts that suggest that the ship itself is alive, or at least harboring some sort of disparate life form that exists everywhere at once. Soon the crew are plagued by hallucinations, with some becoming delusional and even suicidal. As Weir, Miller and Starck uncover more about the fate of the Event Horizon, they begin to suspect that by violating the fundamental laws of the universe, it unleashed something unholy.

It’s clear from the beginning that the movie isn’t concerned with scientific discovery as much as it is the tried-and-true idea that rationalist arrogance inevitably leads to spiritual destruction. It’s Science vs. Faith with galactically high stakes, and from the outset Dr. Weir is seen as an inscrutable outsider who can’t be trusted, while the crew are all bumbling innocents who value duty, fraternity, and ignorance, and become inadvertently snared in his web.

Here’s the paradox of Event Horizon: the outer space trappings make the Christian allegory far more palatable and powerful, but it doesn’t work the other way around. Viewed from another angle, all the Latin and talk of Hell make it unignorably silly as a science fiction film. But the central idea, and the quasi-iconic scene that reveals it (at least, it’s lingered with me all these years after seeing it at a sleepover for the first time) are strong enough to hold the junkier parts--the overacting, the portentous Biblical motifs, the surprisingly thin plot--in steady orbit for its entire duration.

Event Horizon makes the transition to horror comfortably because that’s what it was all along (its first shot is the Lewis and Clark in silhouette as an upside down cross, for you-know-who’s sake). Approach it looking for something cerebral and you’ll be dissatisfied, but show up ready for myth and retribution and you can appreciate why it has minor cult status. It’s wise to take this one on faith.