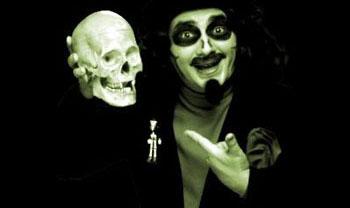 Sometime around 1977, I became aware of a late night phenomenon here in The San Francisco Bay Area. Through a series of overnights stays at the homes of friends with much more lenient parents than my own, I discovered a program called "Creature Features". Its host was a quiet, four-eyed, stogy-smoking oddball named Bob Wilkins.

Wilkins’ sardonic way and informational approach worked a strange magic on the late night viewer and made Creature Features the preferred destination for horror fans on Saturday nights. The production values were as goofy and slipshod as those in the movies that Wilkins was featuring, but that was a big part of the charm. Bob Wilkins eventually gave way to John Stanley and "Creature Features" eventually gave up the ghost to new programming trends and the immediacy and freedom of the VHS boom.

Later I would find out that Wilkins and Stanley were just a small piece of a much bigger national television happening. One that despite being countrywide, was also distinctly regional in flavor and significance. I am speaking of course of the Late Night Horror hosts that held down the wee hour timeslots of local television stations from Oregon to Maine from the 1950’s through the early 1980’s. These sentinels of slapdash horror cinema took on various personas and often times eclipsed the movies they showed as the reason why viewers tuned in to watch. And while the 80’s served as the graveyard for many of these monsters of ceremony, this 2006 documentary “American Scary” shows that the spirit and influence of these goofy ghouls lives on in many forms.

“American Scary” is equal parts history, character sketch and homage. The backbone of the film is its comprehensive interviews. 1950’s pioneers like Vampira and Zacherly explain their genesis in their own words; as do their successors, such venerable creeps as Ghoulardi, Chilly Billy, and SvenGooli. Structurally, “American Scary” incorporates chronology, host style, and also follows regional threads in efforts to paint a thorough picture of the landscape and its people. For the most part it works well, giving the viewer a clear idea of the subject while keeping the all important personality of the presenters at the center of the film. The inclusion of interviews with high profile devotees and genre figures such as Leonard Maltin, Neil Gaiman, and Tom Savini also help to flesh out the picture.

One somber undercurrent that keeps surfacing throughout “American Scary” is the demise of local programming. Far from a central focus it is nonetheless a bittersweet subtext to the retrospective portions of the movie. The rise of the infomercial, media conglomeration, and 24 hour cable networks all helped sound the death knell for local media personalities. Though they occupied the throw away hours rating wise, the horror presenters could not generate ad revenue to compete with the coming tides.

Unfortunately, most of them went the way of the dodo. But a new generation, inspired by mainstay Gore De Vol’s jump from TV to the internet, has bloomed to help rejuvenate the field. To combat the notion that the golden era is well behind us, the filmmakers give plenty of face time to the new guard. This latter day Creep crop aren’t messing with the formula. Instead, they are holding fast to the idea that despite the rise of high polish presentation there is still space for the earnest and knowing goof. In this area the inclusion of Joel Hogsdon and “Mystery Science Theater 3000” cleverly broadens the scope of the film and the lineage of the phenomenon.

“American Scary” has a few limitations and at least one sizable hole. The limitations come from the nature of the subject. A documentary about people who talk during television breaks is going to be well, a little talky. Director John Hudgens and crew do a good job of moving us from person to person to help minimize the drag but even with the effort the last portion of the film seems slow in places.

The more significant shortfall is the lack of an interview with Elvira (Cassandra Peterson). Though the most iconic member of the host clan is given her own segment and her importance is made clear, there is no insight from Elvira herself. In the filmmakers’ defense, I have heard that The Mistress of the Dark can be pretty prickly (especially where Vampira is involved). Still, with the rest of the film being so comprehensive, her absence feels pronounced.

All that said, this film has all the hallmarks of being THE seminal work on the subject, and it accomplishes this without being unnecessarily long or belabored by minutia. If, like me, you grew up spending late nights with these merry madmen and women, you will find this a welcome walk down memory lane. If you never had the pleasure of seeing the cheerfully cheap and charming exploits of these presenters, it may be a little less effective. No matter where you fall, if you have a taste for funky personalities and simpler times, when fun trumped the idea of squeezing every bloody dime out of the allotted airtime, it’s a trip worth taking.