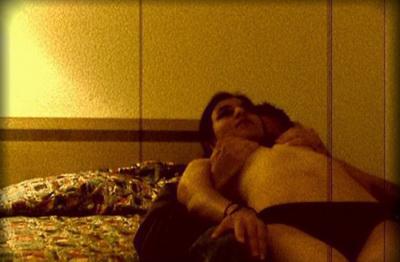 Anyway, we’re talking about “Amateur Pornstar Killer”. The film, video, is a first person follow along. Brandon is a lonely man cruising the darkened streets of Anytown, USA in his car. He picks up a girl (Stacy) and convinces her to accompany him back to his motel room. The audience takes the ill-advised trip with them and watches as the seduction unfolds (in what is essentially a single shot) over the first 40 minutes. Eventually Brandon pushes Stacy into sex, despite learning that the girl lied about being of age and is actually 13 years old. The sex is coercive and creepy and is a logical prelude to the violent end of their liaison.

The first big problem with the film is in the area of sound. With the boom of viral quickies on the internet the average audience is pretty good about bearing with things that sound like the mic was buried in dogshit at the time of recording. The problem is you have to be an advanced crap sculptor to navigate a full 70 minutes of sub-bad sound. Here they apply a couple fixes, namely, subtitles and an enveloping score. Both options could have been efficient if applied with more care and regularity. Instead these devices come and drop off with little regard for natural transition points.

Given the title and initial set-up the film probably has limited options as far as where to take the action. After 20 minutes the endpoint is very much foreseeable, and aside from one small declaration the characters head toward that conclusion without revelation or pathos. Still the movie does carry some power provided you can surrender to sitting in on the mundane moments that often precede many dramatic real-life events. The problem is that in the context of film, the creators should make some decisions for the sake of the audience, like including a story.

With no clear cut narrative we are forced to search for meaning and emotion within a glacially paced conversation between strangers. If the idea here was to give us time to absorb more of the victim’s character so that we will feel her loss more profoundly when she dies, then Ryan and company needed to spend more time on her story. Without a story of any complexity to drive the film, the audience is almost forced to focus on technique. This is unfortunate for a movie like this because the suspension of disbelief evaporates rapidly when the viewers start asking themselves things like, “Why does a film shot entirely on video have artifacts like film grain, sprocket shake and hairs in the camera gate?”

Okay, I have been pretty hard on this movie. I will say this; it gave me room to wonder how the follow-ups improved on the original. I won’t recommend it, but I would watch a sequel in the interest of seeing if they addressed any of the issues that held this one back. There’s an extreme cinema seed here that could grow if nourished correctly. I’d stake another 70 minutes of my time to find out if they improved on the formula.