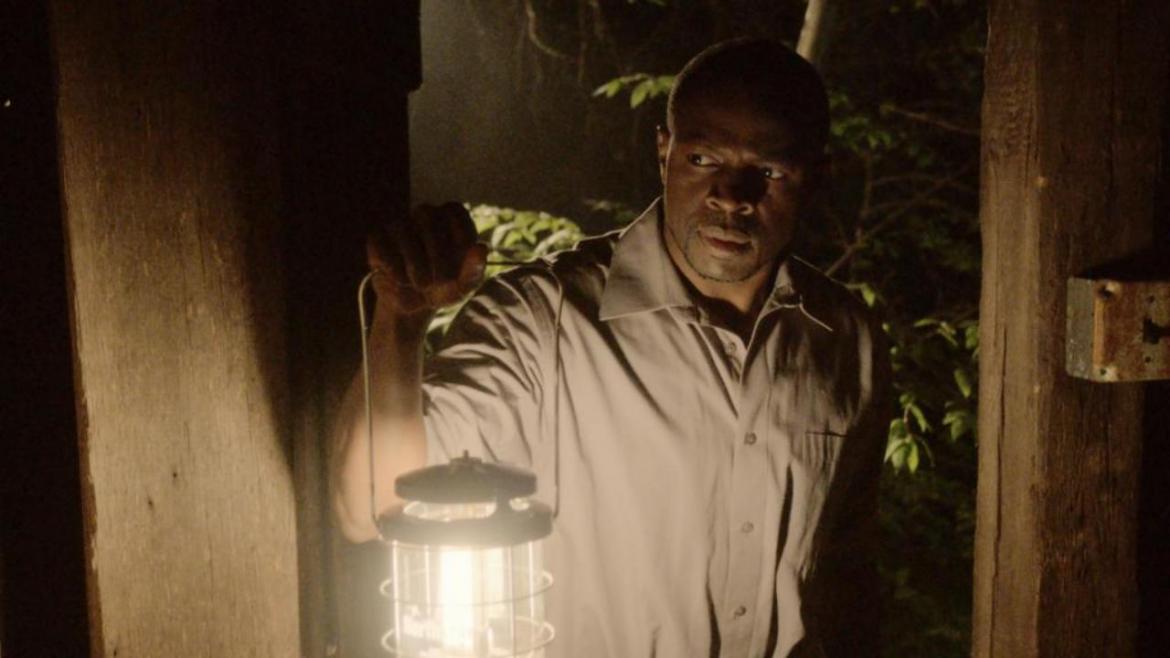 Deep in the Darkness (Movie Review)

A lot of similarly titled horror films have been released in the past year--Dark Summer, Dark Was the Night, From the Dark, Deep in the Darkness--and since at least one of them has been getting some glowing reviews, horror fans may find themselves futilely jogging their memory the next time they’re browsing Netflix. Which one is Deep in the Darkness, again? I am here to help you with that! It’s the terrible one.

Deep in the Darkness concerns the Cayle family--Michael, Cristine, and their daughter, Jessica--when they leave New York City for the small town of Ashborough, where Michael (Sean Patrick Thomas) is taking over the town’s only medical practice after his predecessor is killed, he’s told, by a rabid dog. Right away, the Cayles’ lives are drenched in mystery: from their neighbor with the viciously scarred face, to the discovery that the previous physician was doing research on the Bubonic plague, to the citizens who allude to things of which they must not speak only to be led away at once by intervening bystanders. When Michael’s neighbor leads him to a blood-soaked altar in the woods and tells him the importance of sacrificing animals to appease the bestial “Isolates” who secretly control the town, Michael discovers this backwards burg has a bit more going on than distrust of strangers or excessive churchgoing.

Michael refuses to take the legend seriously--even when his neighbor sneaks a goat into his barn so that he has something conveniently on hand to sacrifice. That night his house is surrounded by pale, long-haired cannibals with shining eyes: the “Isolates”, prepared to murder anyone who hasn’t paid their price. But before they kill him, they coerce him into doing them a favor. They’ll prolong his life, and his family’s, if he helps deliver the child of a dying Isolate in their lair beneath the town.

Deep in the Darkness is almost endlessly derivative and preposterous, so much so that you’ll wonder why anyone bothered to write it in the first place. Way down beneath every monster/plague/zombie/small-town-secret trope this movie piles on top of its buckling plot there’s a promising idea about a physician who’s forced to heal his savage captors in order to stay alive, but director Colin Theys can’t nail down the mood. He could have done well with either campy or full-blown terror, but he shoots most scenes like he’s filming a PG dramedy for ABC Family. The Isolates are hideous, but after the film establishes their uneasy, if only temporary, truce with Michael, they immediately fail to scare--much like haunted house ghouls once you’re old enough to learn they can’t really touch you. Even when Michael and his daughter fall asleep for hours in the Isolates’ lair, they are unharmed (arguably, some information comes later to explain this away, but I assure you you’ll have long stopped caring enough to put it together at that point). After roughly an hour of plot holes, weak scares, and “twists” the movie barely even tries to conceal, Michael’s solution for fighting back against the Isolates is an interesting one--it should have been the premise, not just the final scene.

Ultimately a few campy moments, some decent acting (especially Thomas), and unsettling visuals aren’t enough to keep Deep in the Darkness from being too bland to be memorable. Here’s your mnemonic device, friends: “Deep in the Darkness” is precisely how far you should shove this movie back into Wal-Mart’s $3 DVD bin.