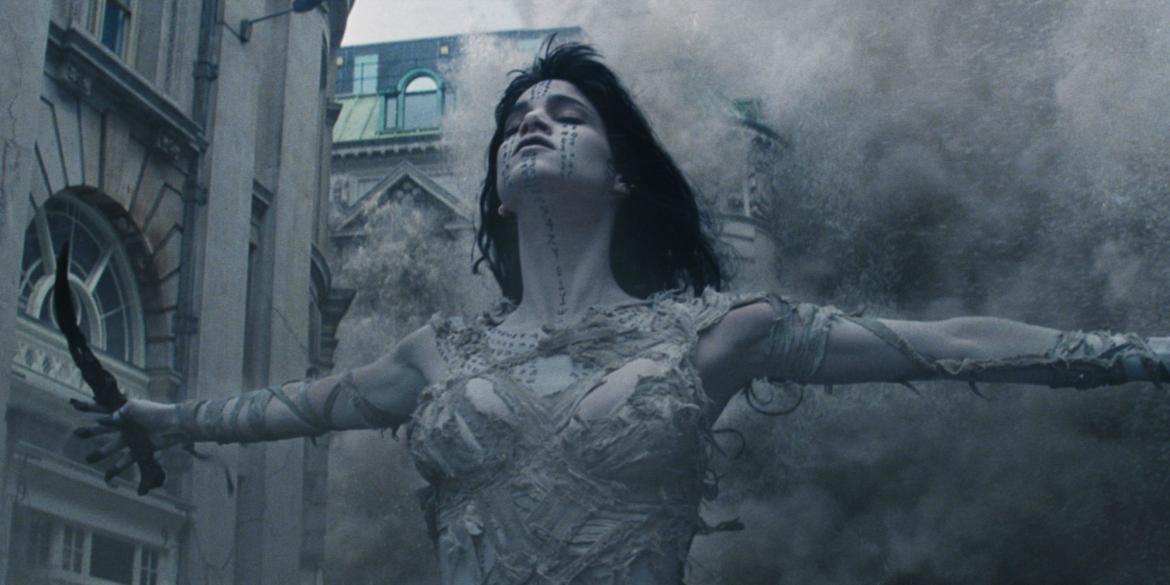 There’s a moment during the 2017 reboot of The Mummy where Russell Crowe - transforming from Dr. Jekyll into Mr. Hyde - turns gray. Not misshapen, or any larger than his human self, just gray. One could say he even looks a bit moldy, kind of like Sofia Boutella’s 900-year old mummified Princess Ahmanet. If anything, Hyde’s complexion is a good indication of the film’s overall stale riffs on the Boris Karloff classic, and the dim-witted yet enthralling Brendan Fraser spin-off of the 90s. It’s old and not getting fresh anytime soon.

Back in ancient times, Princess Ahmanet was the sole heir to the throne of Egypt. On a rather rough night for Ahmanet, her brother was born, leaving her dismayed at the thought of her boss being a baby. Unable to find a support group that helps deal with ancient sexism, Ahmanet turned to Set – the god of violence – and wreaked havoc upon her household as vengeance. Unceremoniously mummified alive as retribution for her crimes, she is unearthed by Nick Morton (an undercover Ethan Hunt) – a racketeering antiquities miner. And it’s love at first sight! Nick becomes the sole vessel to reclaim Ahmanet’s lost power, and soon the world is under siege for him to save.

Amidst convoluted sequences of action, indecipherable script work, and unfeeling performances, The Mummy is not so much of a movie as it is a high-school-grade super cut of scenes from its predecessors put together the night before a final. But I might be confusing this for It Comes at Night.

In its attempt to be a reworking of Universal’s monsters’ lore, The Mummy relies far too much on what is familiar, rather than imagining something new to enthrall a modern audience. Bathed in expository backstory lifted directly from Fraser’s film, not to mention a beat-by-beat finale that (again) mirrors Fraser’s flick, it’s clear The Mummy isn’t trying to mine for originality. Rather, it believes shoving needlessly “self-aware” humor down the viewers’ throat brings levity to an audience too (hopefully) unaware of its misgivings. One can only envision that the filmmakers on Kong: Skull Island are sitting back in their plush theater recliners thinking how their film – as a riff on Apocalypse Now – is worthy of AFI’s Top 100.

Whenever it attempts to be an action or horror film, The Mummy quickly unravels. Trailer scenes that offered a modicum of promise serve little purpose in the final cut. And, shockingly, the infamous scene of Tom Cruise shrilly belting his lungs out while falling from the sky is the film’s finest sequence – solely because his audio was modified. Boutella misses an opportunity to frolic around with an “I’m a sex object” sign to complete her one-dimensional character, which would have paired nicely with Annabelle Wallis’ Jenny – the token damsel in distress. And sadly, specks of promise for the future of the Dark Universe are wasted. While the film does plug Easter Eggs, they’re the shallowest indicators, which feels like a desperate grab to entice audiences too film illiterate of the classic monsters.

Just as Ahmanet promises her suitors power, the studio has given viewers everything they want in sequels, reboots, and franchises: a nihilistic universe desperately in need of saving from the monsters who endlessly pay to see them, and think entertainment is the promise of “oh, they’ll do better next time.”