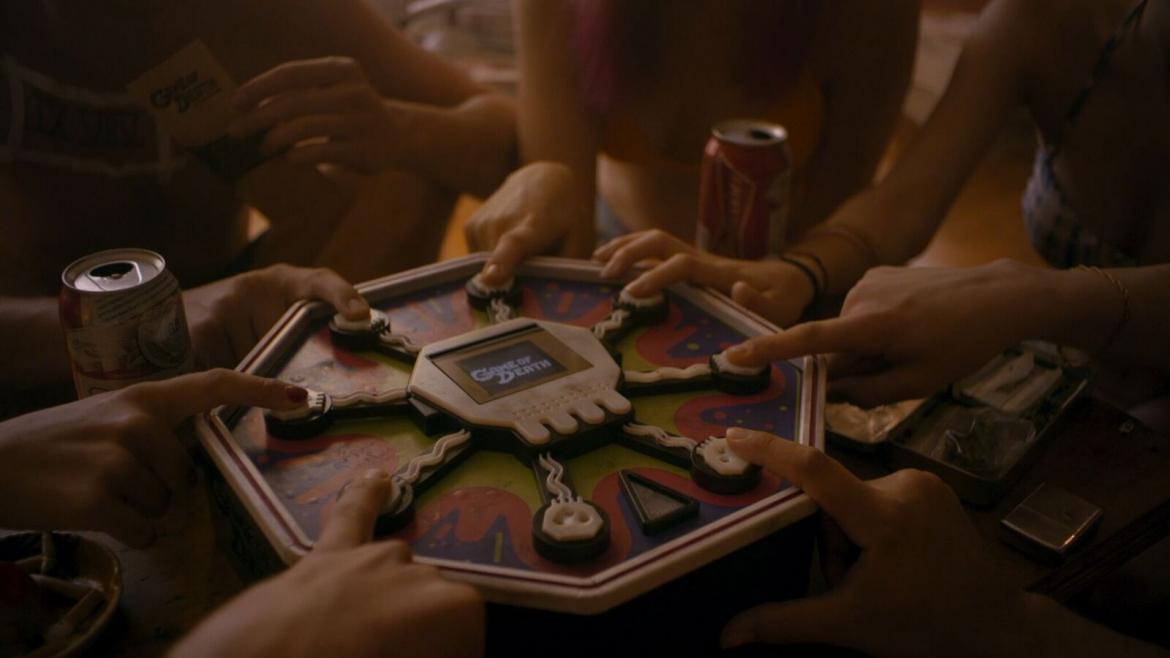 Beyond the Gates harkened back to the niche nostalgia of VHS board games. The not-so-subtle titled Game of Death taps into a similar vein, but with way less interest in emotional catharsis and a lot more exploding heads.

Literally though, Game of Death is little more than a handful of millennials who find a game, that has somehow gone unnoticed in this house for who knows how long, begin to play and discover quickly if they don't follow it's deadly rules their heads will explode one by one. The awesomely simplistic game takes blood from the players, flashes a number in the center screen and a musical timer ticks away. The only rule? Murder someone before the timer ends or the game kills one of the remaining players until the required number of people have been killed or there are no more players left alive.

The rules are simple and the breezes by with a brisk 73 minute run time--and once you stomach the opening minutes of overly sexed up and potentially offensive dialogue the rest of the carnage is open for smooth sailing. However, even boasting its abbreviated runtime, the proceedings run out of juice about halfway through and were left with little more than a repetitive bit of thinly plotted gore--plus opportunity missed for a hilarious exploding heads montage set to Monster Magnet's "Heads Explode.

You could call this a cautionary tale for impatient gamers who don't bother reading the rules of the IP they plan to engage with--in fairness, few games carry such deadly supernatural consequences. In fact everything here is best if not dissected and taken at face value. The game itself has a cool and simple design, the characters are flawed and one dimensional and the name of the game here is brainless kill or be killed gore--something the neighbors to our North (three French/Canadian production companies: La Guerrilla, Rockzeline and Blackpills) have been specializing in as of late

Game of Death is a schlocky gorefest with all the subtlety and taste of a sex and horror obsessed frat boy. Hilariously cheesy one liners and tremendously over-the-top practical effects provide just enough fun to what has the potential to be a perfect movie for all the party animals out there to watch between keg stands.