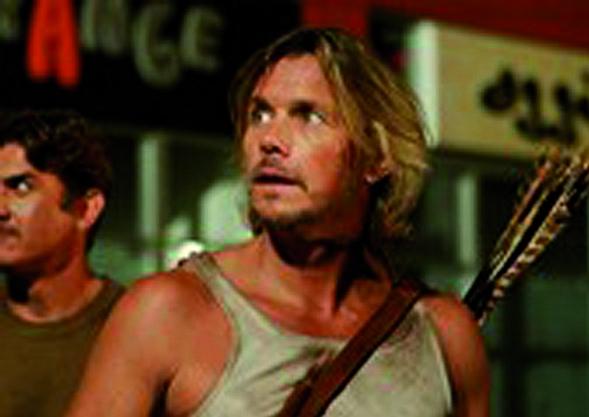 “100 Million BC” is an Asylum production. Those of you who have sworn off the cogitatively degrading joys of shlockery that this studio has to offer should forego the rest of this review. If on the other hand you have a nose for clunky, sixpenny opportunism, an affinity for dogs that roll in duckshit, or an unslakeable desire to laugh at a filmmaker’s shortcomings then you might be prone to Asylum addiction. Watching an Asylum film is like binging on Little Debbie. You know those plump little cakes are hanging toothy stalactites on your arterial walls but you’ve opened the box, and you have to finish it. Perhaps a little emesis will be in order later but in the moment the compulsion cripples your will to live by higher standards.

“100 Million BC” is the story of a grieving military scientist named Frank Reno, played by Michael Gross aka Papa Keaton from the 80’s sitcom “Family Ties”. Reno is the inventor of a portable wormhole device that allows select members of the U.S. military to pogo through time and stare at dinosaurs. The aging scientist has been on the outs for years following a post-WWII accident that left his brother Erik and a band of commando scientists in the cretaceous period. But Reno is no quitter, he has worked like the maligned failure that he is, to locate his lost brother, fix the equipment to allow for a heart-stopping rescue run back in time to when stiff, poorly rendered, dino-toons ruled the land.

Reno enlists a band of nearly plausible soldiers to jump into the time stream and shoot the fuck out of some giant lizards while being mindful not to create any historical butterfly effects. The mission goes reasonably well as most of the actors die prior to encountering real dialog and Reno is reunited with his brother Erik, played by Christopher Atkins. Atkins apparently made a vow after “The Blue Lagoon” that he would not cut his hair until he got better roles. The good news is that 30 years on his long flaxen locks are still just as lambent and breezy as ever. The bad news is that the rescue team accidentally brought back a giant Shrinky-Dink T. Rex. To make matters worse the two people in charge of removing the beast from the byways of modern day Southern California are Atkins and Lt. Commander Ellis Dorn played by “My Two Dads” and “BJ and the Bear “star Greg Evigan. If very little of the above synopsis makes sense then you are exactly where you should be.

There is so much here to make fun of that finding a place to drop-in can be difficult. This fact makes “100 Million BC" a perfect Asylum film and nearly unwatchable, conditions which are not mutually exclusive. The least entertaining aspect of the film is without a doubt the pacing. To use the term staccato would be to suggest that there is a rhythm to the movie. It would be more accurate to say that the spine of this picture is an aggregation of non-pregnant pauses and special needs special effects.

Upon returning to the present with the dinosaur the storyline goes from vague to tommyrot. I defy anyone reading this to make sense of the last 15 minutes to the satisfaction of a semi-sane person. The final act rolls out like a blooper reel without all the nut-shots and actors breaking character.

The real star here is Chris Atkins. His stop-n-pose performance stylings are only bested in the cinematic world by Deborah Gibson’s slot-machine indicating in “Mega Shark versus Giant Octopus”. You can almost feel Chris’ acting coach slipping a gun into his mouth every time Atkins pinches off a scene. This is because the golden boy has written a new chapter into the great book of hambone thespianship. His flourishes of movement are almost always finished off with a Ron Ely- Tarzan pose and a gaze to the firmament as if he is awaiting … A chance to be on the poster? The flying spaghetti monster? A sequel to “A Night in Heaven”?

Sadly by the time we reach the third act the finest principles of goofiness and fun have been trodden under the flummoxed filmmakers’ big clumsy feet because of an insistence on trying to develop character relationships. This is a problem with many Asylum films but most of the time the editor wrestles the movie away from its soulless characterizations and in short order gets the audience back to the business of clowning the rich traditions of film. Not the case here, as delightfully incomprehensible as “100 Million BC” is, it is also fairly boring. Asylum films should never inflict that on their viewer. We who watch them without apology know that the experience may require lots of fluids (spirits) and a Kubrick chaser but it should never necessitate No-Doz. All the Little Debbie Devil Squares in Tennessee can't make this one worth the effort.