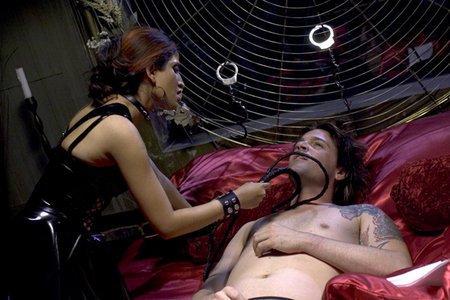 A Troma release in name, something altogether different artistically, "The Seduction of Dr. Fugazzi" straddles the line between a number of different genres. On one hand the movie is a glorified resume for writer/director/producer/star October Kingsley. On the other hand it is an overblown art school film that traipses into the nonsensical and trippy realms of pretension. Despite all this, it still manages to hold yet another facet that transcends the eye rolling and confusion, helping it to become a movie that has a decent little plot twist and an okay story... In Hindsight. The key to enjoyment is getting through to the end to be able to look back at it all.

Dr. Fugazzi is a newly minted abnormal psychologist. She has her own practice, her own patients, the works. She even has a very (VERY) active sex life. Her boyfriend and herself are near insatiable. Kinky sex acts between the two of them are the norm, some even involving all of their friends. What more could a girl want to improve such a charmed life? Certainly not the debilitating headaches, the terrifying and blood soaked visions and the missing friends and loved ones that start to appear, seemingly out of nowhere.

"The Seduction of Dr. Fugazzi" has a steep learning curve to get into. First and foremost being the name 'October Kingsley' that is slathered all over the packaging and websites of the movie. She's billed as the writer, director, producer and star and even slaps her name in the full title. Sure, she deserves a shot at being proud of herself and bragging a little, but the blatant self promotion going on is flat out distracting. With as often as she mentions herself, you wind up spending the opening of the movie still trying to ponder who the hell she is and where you're supposed to know her from.

Once you get past the in-your-face promotion, you can finally settle into the film. So you'd think. Sadly, it still smacks of the same problems of self importance and conceit. This time around it comes from all of the edgy alterna-costuming highlighted throughout the movie. Can you really take a shrink seriously when she's decked out in wild two-toned hair, stiletto heels, fishnet stockings and cleavage all about?

Ranging from the trampy doctor-wear to various leather outfits that seem to crop up throughout, the fact is that the jack-of-all-trades Kingsly cannot seem to separate her personal tastes from her professional ones. While it does set up the viewer for a slide show of her edgy fashion skills, it does nothing to pull us into the characters or to make them easy to relate to. To be honest, you're left wondering what she's going to wear next, which helps to increase the feeling that this movie is nothing more than a glorified headshot for Kingsley.

If you can get past all of this though, you'll soon find out that there's an actual movie going on here. Kingsly surrounds herself with a large number of hammy actors. None are necessarily off-putting, but they are all over the top. Some become adorable if not misplaced such as with Dr. Fugazzi's mentor Professor Elam. Others just manage to be annoying. There is even a story here at some point, though it remains relatively flat. It's far fetched a times, groan inducing at others and down right perplexing as well, but it does lack major plot holes. You have to give Kingsley credit for that.

"Dr. Fugazzi" doesnt sound like much of a movie up to this point. Overall, its' not. However, in the third act something manages to click that makes it actually start to work. It's not an earth shattering moment that you've never seen used before, but it works. A factor that makes the previous hour of confusion and nonsense actually start to congeal into a decent movie, you soon start to clue into the small subtle moments throughout the film that suddenly make sense. A key factor to this is the well crafted production design that adds an intelligent nuance to the film, such as changing background colors to represent Dr. Fugazzi's moods. Suddenly, "The Seduction of Dr. Fugazzi" isn't so bad.

This movie has its issues and suffers from a heavy dose of artistic ego. If you give it a chance, you'll find yourself pushed away by the weirdness of acts one and two, but you soon find yourself reeled back in at the last moment. Let's not forget that this is likely the only Troma film that you will find starring Faye Dunaway! Did I forget to mention this small tidbit? Yes, Faye Dunaway has a small role in the film that is actually vital to the plot and fits in well. Not thrown in as just a famous face to add credibility, she is actually an important part. She acts as you'd expect, that is to say, well. More than anything though, you'll find yourself wondering just how the hell they got her to agree to be in this little indie film.