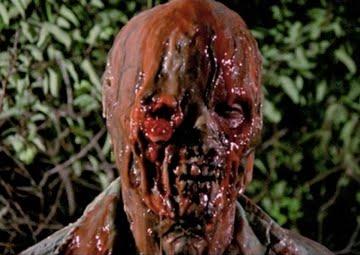 In 1977, I saw “Star Wars” in a dilapidated old theater with a yard-long tear in the lower left hand corner of the screen. I still thought Carrie Fisher was beautiful even with an arm-sized black gash in her cheek. In fact, I hardly noticed that large rip at all because like many kids of my generation “Star Wars” would prove to be the seminal film going experience of my young life. Later that year I would see a trailer for a film that I was sure would be the second formative cinematic moment of my young movie-going life. “The Incredible Melting Man” preview captured my six-year old imagination with its oozing, space-age blend of sex and violence and I rushed into the adjacent room to tell my mom that we needed to hit the theaters as soon as possible. Needless to say my mom nixed the idea out of hand while murmuring something about the unscrupulousness of television advertizing practices. I whined, I pleaded, I tried to frame the film as a unique mother/son bonding opportunity; no dice. The movie left the theaters, was never stocked at my local video store during high school and all but vanished from my consciousness. A week ago, a non-descript package arrived in my mailbox and when I opened it to see “The Incredible Melting Man” screener on DVD, I felt like a kid again. I smiled broadly, showed the cover to my 16-month old son who excitedly shouted “Truck!” and then without bothering to correct him the two of us sat down to share the little slice of parent/child bliss that my mom had denied me 35 years prior.

“The Incredible Melting Man” tells the tragic tale of an astronaut named Steve who glimpses the sun through the rings of Saturn and returns to earth with a nasty bug. This particular bug causes Steve’s soft tissues to slough-off like hot spumoni and sends him into a feverish quest to devour fresh human flesh in order to alleviate his suffering. Steve’s compatriot, and expert in the very specialized field of radioactive celestial pathology, Dr. Ted Nelson is tracking Steve across the countryside following the melter’s escape from quarantine. Ted worries about Steve, Ted worries about his pregnant wife, and Ted worries about Brigadier General Perry who is tagging along to insure the utmost secrecy is employed as well as to take the good doctor to task about who is wearing the pants in his family. Turns out the doc is right to worry as Steve’s binging on man flesh takes out a fisherman, a chubby nurse, a frisky elderly couple, a man who looks like Danny McBride and few others before the film’s final showdown at a power plant.

This movie is everything I wanted it to be; my son on the other hand watched the opening shots of solar flares, crawled off the couch and said the word “poo”. After I changed his diaper I finished the movie (sans toddler) and thoroughly enjoyed myself. The problems you would expect this kind of film to have are definitely in evidence here. It’s dated, goofy, ponderously paced at times and laughably acted. Fortunately these are also exactly the kind of problems, save the pacing, that you would hope a movie like this would suffer from. If you are not a person who enjoys an earnestly serious film that possesses, as its greatest asset unintended comedy, then by all means pass on this one. If, however you are like me and see little point in measuring the sober cinematic merits of a movie made by the director of the Dorothy Stratten vehicle “Galaxina”, then you will probably get a kick out of “The Incredible Melting Man.”

The star of this show is no disappointment; Rick Baker’s FX work gives us a beautifully drippy, skin dropping mess of a title character as well as some pretty nice practical injuries for his victims. The second fiddle here is the dialog which has some absolutely priceless “Airplane” caliber moments. My favorite among them is as follows:
Dr.Ted: If I tell you this, you can’t tell anyone, not even your wife.
(Pregnant pause)
Sherriff Neil Blake: You know I’m not married, Ted.

Of Course, this film has already received the MST3K treatment and if you’ve seen that one it may well preclude any desire you have to see it without the jocular commentary. That said, I think this film is highly-watchable even without Joel, Tom, and Crow. I can’t say for sure whether viewing this with my mom when I was 7 would have brought the two of us any closer but I will say that this particular viewing proved to be a lot of fun and a good baby laxative to boot.