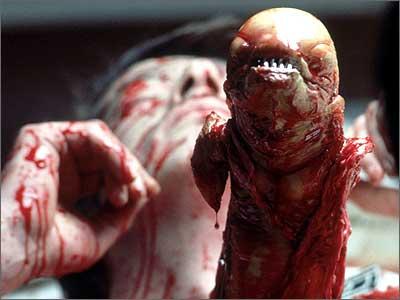 Ridley Scott’s “Alien” is a perfect horror film. Even with some dated modeling and FX work the film is still possessed of electric tension and unparalleled originality.

A commercial towing vessel, the USCSS Nostromo, is pulling a factory platform in deep space when the crew is awakened to answer a distress call from a nearby planet. The signal proves to be from a dead ship which is host to a parasitic beast. The acanthoid monstrosity fiendishly stows away on the Nostromo and proceeds to stalk the helpless 7 person crew through the steamy bowels of the refinery.