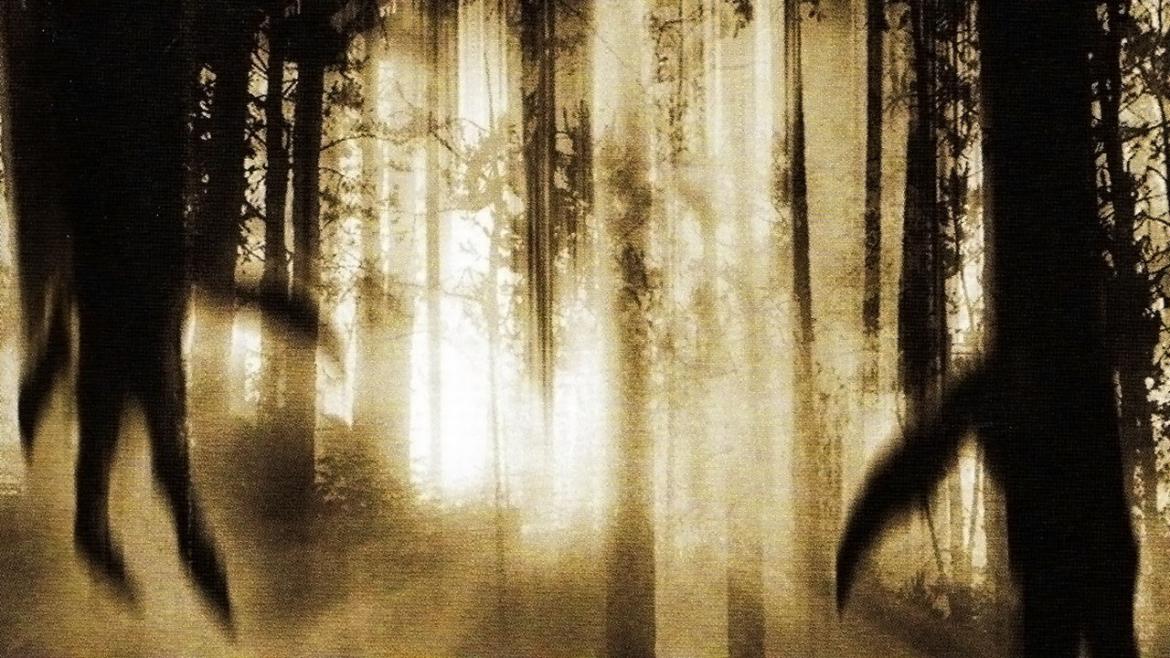 After finally getting a chance to sit down and check out Eduardo Sanchez's "Altered," I have to say I'm more than a little shocked that I didn't heart more about it in the horror community upon it's release. The co-creator of the Blair Witch Project went way out on a limb here and from what I just saw, succeeded with almost everything he was trying to do.

"Altered" centers around 4 friends living in the deep south. 15 years earlier, the four men (plus one other) were abducted by aliens and became the subjects of horrific experiments. One of them died, and another (Wyatt, played by Adam Kaufman) was kept around a little longer than the others for reasons unknown to the audience at first. As the film opens we watch as the other three are on a hunt at night in the woods. It becomes apparent real fast that what they're hunting isn't of this earth, as they soon end up with an alien literally trapped in a fox hole. We find out that they've been doing these hunts for years, and the last thing they ever expected was to actually catch anything. Perplexed as to what to do next, they tie the creature up and bring it straight to Wyatt's house.

The characters personalities all show themselves very shortly after the opening. Wyatt, living with his girlfriend Hope in the woods, is a quiet and troubled guy who obviously never got over what happened to him over a decade ago. Cody (Paul McCarthy-Boyington) has never gotten over the fact that his brother was murdered by the aliens back in the day, mostly because the town thinks they're all insane and that he did the deed to his bro. Cody, as it turns out, is a giant asshole because of this and it becomes apparent that he harbors much ill will towards Wyatt for what went down. Brad Williame Henke plays Duke, the big, lovable (and mulleted) friend who it seems is always trying to keep the peace. The fourth friend is Otis (Michael Williams of Blair Witch fame), who is essentially the stereotypical bottom of the ladder friend, constantly getting walked on by Cody's dominant personality.

As the men stare at the Alien tied to a table in Wyatt's garage and decide what to do with it, we slowly begin to learn more about the creatures. For starters, they've got a nasty bite that is sure to put you out of commission "Romero" style if you happen to be on the unlucky receiving end. They also seem to have some monster telepathic abilities, and at several junctures are seen to be controlling humans. As the story progresses we find out that the aliens are interested in Wyatt because their experiments didn't seem to have any real effect on him. As Hope tells him after being temporarily "linked" with the creature, "they're scared as shit of you Wyatt."
Altered

What Sanchez has accomplished here with "Altered" is pretty darn impressive. He's taken an epic tale of Alien invasion and brought it down to it's simplest level. The real terror comes from the interactions of the men, their run-ins with a single alien, and the impending threat of a full scale invasion. He's obviously working without a lot of cash, and yet he's able to pull off a decidedly "Neil Marshall-esque" feat ala "The Descent," in that he made a very scary and tense monster movie on a shoe-string budget.

It's odd too, when you consider that he's pretty much been out of the director's chair since "The Blair Witch." It seems as if he's become a mature and capable filmmaker without having any real credits to show for it. This film was intended to go theatrical but it didn't, and I'm not all that surprised. There are no pretty people, no big budget effects, and a creature that at times gives off a "rubber suit" vibe straight from the 50's. Although to be fair, it seems as if that may have been the intention, and it doesn't make the thing any less damn scary.

Other than occasional issues with the monster suit, the only other thing that left a bad taste in my mouth was a tacky looking CGI shot at the end and a totally cliche monster movie climax. (SPOILERS) How many times do we have to endure the old "they're all in the same place so blow them up!" ending? Especially in a film that played it so straight and smart for most of it's running time, I was a little disappointed in the finale. (END SPOILERS) Любите достаточно взрослых женщин, которым уже пошел пятый десяток и они хватаются за любого мужчину, который обещает ей жесткий анальный и вагинальный трах? Тогда вам несомненно стоит посмотреть как мамки за 45 занимаются сексом с различными парнями. тут вы не найдете чувственности в их близости, потому что дамочки такого возраста очень дикие в сексе и ебутся с возбужденными чуваками словно в последний раз.

The soundscape in this film is amazing, and it had to be. Without seeing a whole lot, it's really the kind of flick which leaves a great deal to the imagination. Great audio accomplished that and helped the film avoid feeling "cheap." He's helped immensely by a cast that shines every chance it gets. Seriously, there isn't a bad performance all the way through. Major kudos go out to Kaufman, who goes way out side of his typical role here and is convincing as hell.

"Altered" is dark, grimy and claustrophobic, all things a great monster movie should be. It's also extremely tense and at times genuinely scary. I'm not sure it was good enough for a wide theatrical release, but at the same time it's light-years ahead of the rest of the STD shit cluttering up shelves these days. In that sense, the film and Sanchez certainly got a raw deal. If only we still had a system where something could get a limited release and be successful, than this surely would have done great. I recommend picking up a copy right away, if only to support more of this kind of intelligent horror fare.