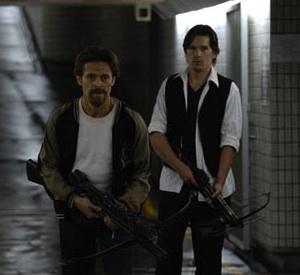 Watch as a young girl leaves her idyllic country home in the minutes before dawn. She sits down in the soft grass of her front lawn and is quickly burned alive as the sun crests the distant hills. She was a vampire, in a world populated with vampires, and she had simply lost the will to live. This act of desperation opens "Daybreakers" -- the sophomore feature from writing and directing team Michael and Peter Spierig -- and it sets the tone for a dystopic nightmare that follows.

The set up is simple: in 2019, nearly all humans have been either converted to vampirism or hunted down so that their blood may be used to sustain the now overwhelmingly vampiric world. The change happened so quickly that most if not all the conventions of human society remain intact. The government governs, commuters travel by train to and from work, and coffee shops offer their joe with blood instead of milk. The only major difference is that all this happens at night.

Central to "Daybreakers" conceit are the capitalist vampires, those enterprising businessmen and women who make the world go round. In a world filled with blood suckers, he who controls the supply is king. Here that man is Charles Bromley (Sam Neill), CEO of Bromley Mark, a blood bank of sorts where many of the world's remaining humans are stored and harvested for their precious blood. Bromley has made himself into the leader of the vampire industrial complex, with an army at his beck and call he controls the blood supply and tamps down uprisings of starving citizens as the last drops of hemoglobin are drained from the scant remaining humans.

Playing the role of disruptive force and unwitting hero is Edward Dalton (Ethan Hawke), a brilliant hematologist for Bromley Mark, he toils to create a blood substitute that would make the hunting and imprisonment of humans unnecessary. Dalton maintains a sympathy for humans, as he was "turned" against his will and still refuses to drink human blood. When a random accident throws him into contact with the tiny, fledgling human resistance, Dalton cannot help but be swayed to their cause. The promise of a cure for vampirism becomes his new animating force.

"Daybreakers" vampires are cut from a very traditional cloth. Sunlight burns them, wood stakes (often fired by crossbow) kill them, and much of what stands out in the Spierig brothers' script are the many well thought out mechanisms and adaptations that would allow a society of vampires to exist. There is never a question of the filmmakers interest in, and indeed love of, the vampire myths. "Daybreakers" shares much in common with other modern spins on the old lore, notably the "Blade" films, but here the Spierig's have created a world that feels more whole -- and thanks to the film's cinematography and color palette -- one that alternately oozes and launches itself from the screen.

In the hands of less capable or dedicated filmmakers, a film like "Daybreakers" could very well devolve into a direct-to-video snooze-fest. But the Spierigs employ many creative faculties -- beyond the aforementioned cinematography -- that lift "Daybreakers" to the heights of heady, B-movie delirium. Perhaps the filmmakers' greatest virtue is imbuing their film with heavy doses of effects on what often seems a shoe-string budget. Игровой клуб Drift Casino предлагает шикарные бонусы для новых игроков In sequences involving fire or flaming bodies, of which there are plenty, the limits of the effects are definitely pushed, but excellent use of old-school Tom Savini-style splatter-and-dismember techniques make up for these deficits while also serving to remind viewers that this dystopia need not be taken entirely seriously.

The Spierigs show consistently that they don't just know effects -- they also understand the nature and raison d'entre of genre films. Their script, slathered in allegory, brings together impossibly broad themes about consumption and capitalistic societies, humanity and conservation. It's heavy on dialogue at times, but the story pops with tension and action sequences. The acting isn't always outstanding, but in the whirlwind of genre-infused craziness it takes a backseat anyway. "Daybreakers" overcomes its faults with excellent production design, a brisk run time that clocks in just over 90 minutes, and a nice third-act twist that deepens the plot while pushing it toward its conclusion.

The world of "Daybreakers" -- as in other near-future sci-fi allegories -- is both alien and familiar. The reflection of our world projected onto the screen may be grossly distorted, but not so much so that its unrecognizable. In a world of vampires, human emotion has been all but erased, replaced instead with greed and a violent hunger. There is no longer a need for marriage or reproduction as everyone can and will live forever -- as long as their is blood. In crafting their world and setting their film just as the final human blood cells are disappearing, the Spierigs have created a vision that not only frightens but also engages. They manage to connect with universal human emotions such that the darkness of the vampires shines a light onto modern questions that realism might fail to raise as adequately. While "Daybreakers" has flaws, they fall away in the eerie glow of the Spierigs vision and in the headlong rush toward their world's undoing.