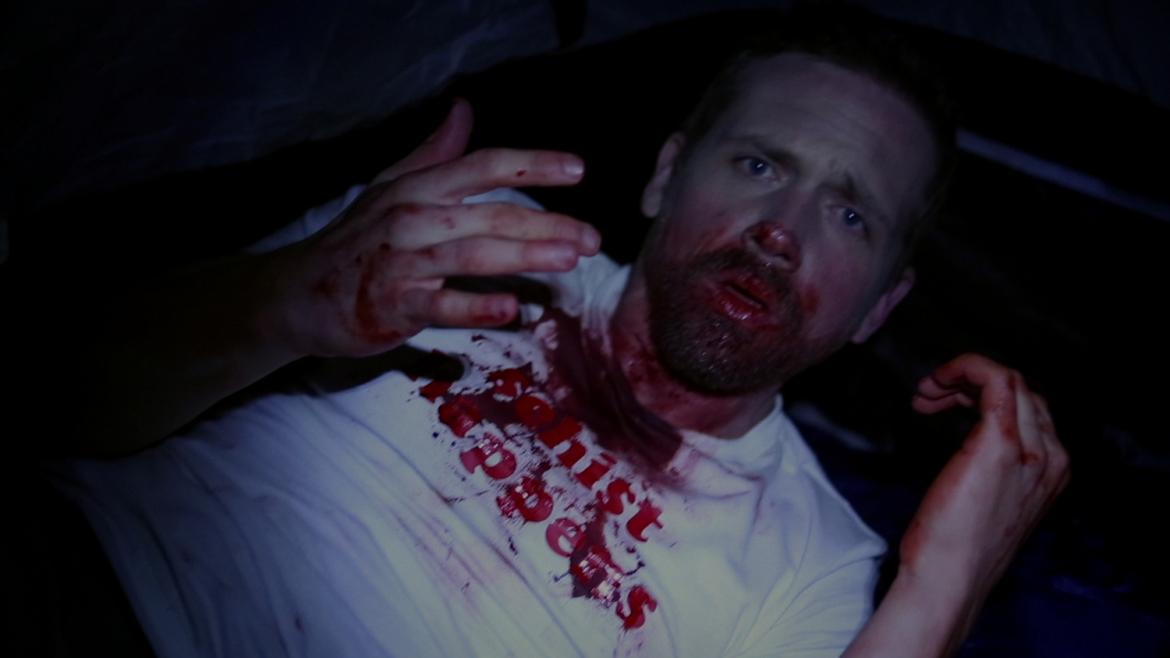 The Superstition Mountains just outside of Phoenix, Arizona are steeped in deep and bloody legend. Some Apache believe that the mountain range houses a portal to the spirit world … or even Hell itself. Other legends employ the backdrop of the nineteenth century American gold rush. The lore of the Lost Dutchman’s Gold Mine has claimed several explorers’ lives in their quest to discover it. Hikers’ remains are often found in mysterious locations amid eerie conditions, further fueling the doom and damnation of the mountains and their precious gold.

This is the backdrop for Tara Anaïse’s found footage indie flick, Dark Mountain. Pretty good storyline for a movie, right? Three friends decide that it is, in fact, an intriguing concept and proceed to investigate on their own, filming all the while. Our protagonists include a straight-shooting skeptic, his ambitious and opportunistic girlfriend, and a best friend with ties to the mountains (unbeknownst to us at the outset).

The three friends set out on the trail and wander around the wilderness for a bit using a comically vague and poorly drawn tourist map of the mine. Before too long, the group is convinced someone or something is following it. After wandering into a cave and witnessing weird sounds and a spooky-looking mist, they head back to camp with a quartz fragment containing a vein of gold. Here’s where things take a turn for the weird. During the night there are a few scares, including the boyfriend being found blank-faced and half-naked in the surrounding area speaking in tongues, eventually being found again chomping on some bloodied animal.  Eventually concluding that they are pretty much screwed if they stay, the three decide to leave the territory for the sake of their safety. Unfortunately, they stumble onto an abandoned campsite, where they find a disturbing journal and recordings from the 1970s that basically describe the exact events they themselves are experiencing. The eeriness of this causes a rift among them and all Hell breaks loose. Split up, they are forced to face whatever awaits them in the dark.

At the outset, the film boasts a simple but intriguing plot: the draw of the Superstition Mountains and their dark history. However, the found-footage approach cheapens it a bit, having been done to death, but at least this film is prefaced by an info dump clearly explaining that the footage had been discovered and edited into a narrative by a third party. There’s even a moment that blatantly references The Blair Witch Project, which plays like an odd reference point in the film’s universe (especially since this is basically the same film in a different location), not an homage or a send-up. The found footage approach kind of explains the strange editing between the different camera types, but sometimes it betrays it, too. A bevy of post-production filters seem to serve as shorthand for different camera styles (handheld, iPhone, etc.), but they could also imply the parallel time periods of the different hikers and their experiences. Even occasionally striking cinematography can’t save the mid-grade actors, who have very little chemistry and often feel painfully artificial in their interactions. Jump scares and a solid soundtrack help to sustain some momentum in an otherwise mostly boring affair.

Overall, the film has great potential, mainly with regard to our invisible foe. The unseen entity stalking the group could reasonably be one of any number of things – a UFO, a spirit, a vortex to a parallel in the time-space continuum – but instead of developing one of these possibilities, Anaïse fails to commit to any of them and clumsily leaves viewers to sort matters out themselves.