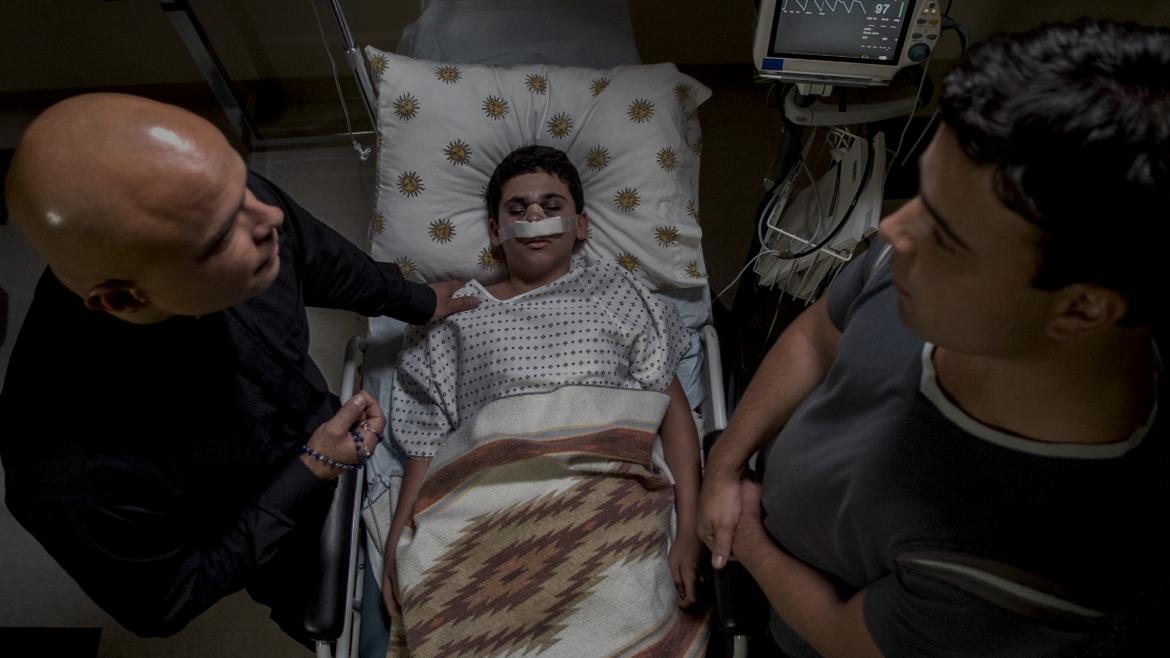 Who's to say how any of us would react should someone we love come down with some supernatural ailment. Yes, ailment--because according to Aaron's Blood vampirism is an affliction that can be cured...and not by maiming the infected party. Lame right? If only a lack of original gore and compelling father/son drama were the only problems sucking the life out of Tommy Stovall vampire drama.

The stage of potential is set early in Aaron's blood as Aaron (James Martinez), a phlebotomist and single father to his hemophiliac son, Tate (Trevor Stovall). A bullying incident sends Tate to the ICU in need of a blood transfusion--no biggie, right? Well, then Tate starts showing exceptional ability to heal, loss of appetite and alarming strength. The film's potential steadily drops throughout most of the film, but there is a jarring and catastrophic pitfall right about this time. When the school's janitor turns out to be a buddy of a vampire hunter he and the hunter show up in Tate's bedroom to snuff out the potential threat. Aaron intervenes, the janitor is killed and here is where things start spinning wildly out of control. The hunter, Earl (Michael Chieffo), instantly loses his motivation to kill Tate, gives Aaron his ax and a series of vague details hinting that the change can be reversed and hightails it out of the house--leaving his dead friend in the dust. From here the film is a race to the clock for Aaron to decipher Earl's information and try to save Tate.

Solid ideas and at least one potentially clever twist proves to be all for not here. A rational viewer will snuff out the red flags early and often and jump ship long before it's too late. Even if you can stomach forging forward after the aforementioned "failed vampire hunt" scene you're still looking at an hour of painfully stilted dialogue and a script full of plot elements that--in the hands of a better writer-- have merit, but fall woefully flat surrounded by complete nonsense.

A film that takes itself so dead serious can ill afford all the silliness on display. You'd be hard pressed to call any of it intentional, which makes how laughably bad it all is that much more depressing. Then sobering moments of competence come out of nowhere and threatens to incite interest before pummeling itself back into incoherence. Themes of eternal life and a deeper father and son bond are hidden somewhere in here that could have helped Stovall dig this film out of mediocrity, but as it stands the plot is boiled down to bullet points leaving little to no depth to Aaron's journey or his relationship with Tate.

When the emotional crux of your film relies only on a father's nickname for his son and a short scene setting that up it's safe to say the dramatic tension needs work. Let's put it this way, if the Lifetime channel had a branch of horror programming dedicated to emotionally fragile men with daddy issues then Aaron's Blood would be playing in the Primetime slot. Even then, those emotionally damaged dude bros might be be left dead-eyed and snoring on their futon.