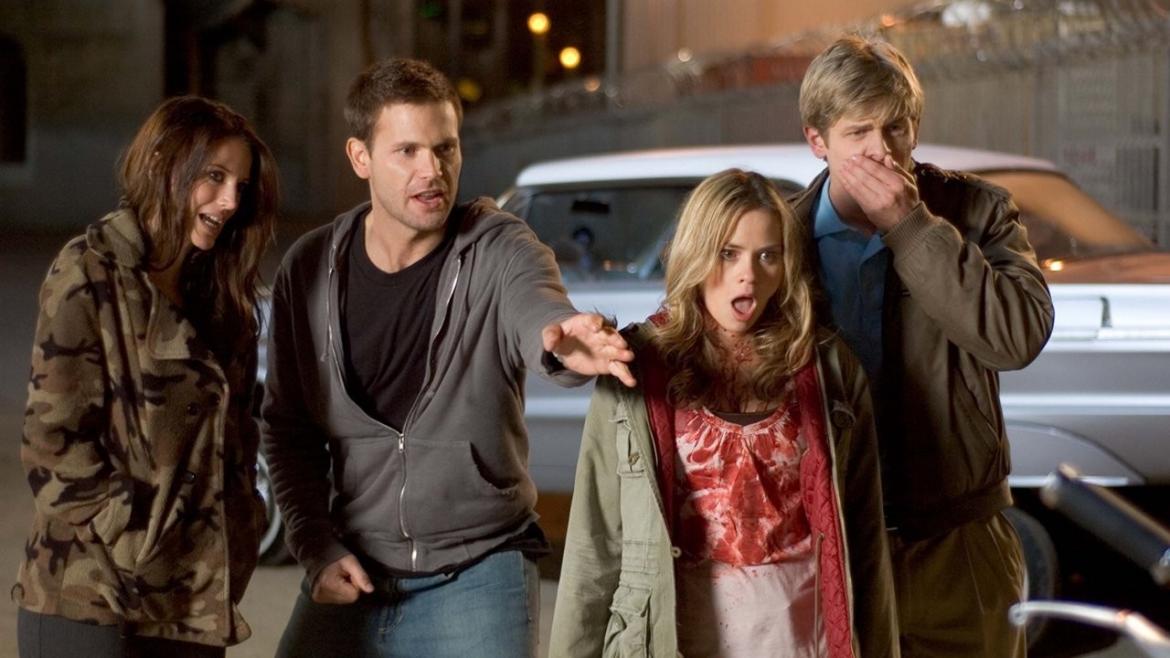 If you were to ask me to come up with a list of the things I'd like to eliminate from the horror scene, zombie comedies would be pretty high on the list. As you can imagine, when "Aaah! Zombies" came across my desk for review, I let out a hearty groan and reluctantly popped it into my DVD player. Despite my initial skepticism, it turns out that "Ahhh! Zombies" (titled "Wasting Away" in its initial festival run) is a rare standout among a sub-genre of a sub-genre that arguably ran its course years ago.

The first few minutes of "Aaah! Zombies" should be familiar to any fan of zombie shenannigans. The military has developed a chemical to create super soldiers, discovers that it's a failure, and then bungles an attempt to transport it to a waste site, spilling it all over the place. We are then brought inside the bowling alley that the chemical was spilled near, introduced to a group of attractive young 20-somethings, and the fun begins.

Immediately, one of the standout characteristics of "Aaah! Zombies" is revealed: it's actually pretty well written. The banter between characters is funny and witty without being too in-jokey, and the characterizations and relationships are fleshed out well enough without the need for any excessive exposition that would threaten to get in the way of the fun. The group is largely carried by Matthew Davis, who's consistently funny throughout, and acts as the catalyst for numerous important scenes in the film, including the scene where his brilliant beer/soft serve ice cream hybrid accidentally turns the gang into, you guessed it, zombies!

This transformation occurs very early on in the film, and on its face seems like the concept would wear thin after a while, but there's a twist. Throughout a majority of the film, our protagonists don't know that they are zombies. In fact, after a talking-to from military man Nick Steele (played by Colby French), they think that they are actually super soldiers that are virtually un-killable. On screen, the difference between how the group perceives themselves (largely normal but slightly falling apart) versus how the world perceives them (aaah zombies!) is handled by switching back and forth between black and white and full color. From a filmmaking standpoint, it makes sense that you would want to differentiate between the two "worlds," but here it seems kind of lazy and distracting, and at times takes away from what's a pretty interesting and fun ride.

Although "Aaah! Zombies" is a low budget affair, director Matthew Kohnen does a fine job mixing up the action, as each character's separate story leads them to some sort of over the top encounter, that usually ends up a gory mess. There is quite a bit of gore to go around here, but it's surprisingly understated for a zombie flick. Yes there are body parts flying all over the place and blood by the buckets, but it's clear that the horror takes a backseat to the comedy, which serves to keep the viewer engaged and carry them through most of the experience. Once everyone realizes that they have become zombies however, the film starts to meander and take on a rushed "zombie revolution" type direction that may have been better if saved for a sequel. That being said, this film still manages to be entertaining up to the final moments despite the momentary loss of focus.

No one can argue that there aren't too many zombie comedies clouding up our DVD shelves, but "Aaah! Zombies" sneaks in an entertaining twist on a hackneyed concept. Thanks to solid writing and strong comedic performances, it's substantial enough to be worth a watch for anyone that can look beyond an awful name and the stigma of the genre. Now if you don't mind, I'm going to go see if that beer and soft serve thing really works.