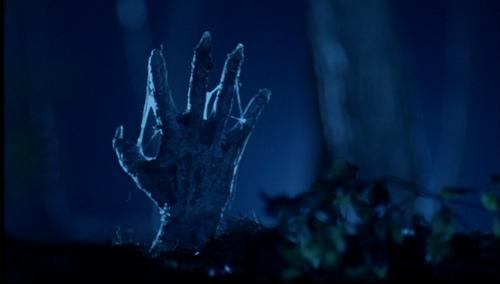 Except for her best friend, Estrella is an average teenage girl. Her mother works late nights as a nurse in the hospital and her dad left them long ago. Estrella fills her unsupervised hours watching horror films and reading horror fiction. “A Real Friend” opens with what appears to be lost footage from the original Texas Chainsaw Massacre, or at least the Spanish beach massacre part... Wait a minute.

While Leatherface, (he's credited as Bubba, but it's obviously meant to be Leatherface) is swinging his chainsaw around precariously, Estrella shows up in the frame farther down the beach and when Estrella's mother, Angela walks in you realize that Estrella was watching a movie and imagining herself as one of the characters. We find out later that Leatherface actually plays a large part in Estrella's life as we see him with her in the classroom at school, in the bathroom when she takes a bath, and he even comforts her when she is crying in her room, but Leatherface isn't her only friend. She also has a Nosferatu figurine that comes to life and a Doctor Jekyll and Mr. Hyde. Estrella doesn't seem to be in any danger until she meets a man called the Vampire, who seems to be more than a friend from her imagination.

Urbizu's “A Real Friend” is solid. Another short piece (75 minutes) made for the Spanish television series “6 Films To Keep You Awake,” it sparkles with an unexpected glimmer of originality. Estrella is played well by Nerea Inchausti, but really I kept waiting for Leatherface to pop back up on screen. I never thought Leatherface could make me say “awwww, so cute,” but there is something in his translation to modern day that makes him endearing.

“A Real Friend” has a great concept, taking classic horror icons and reimagining them into modern day thanks to Estrella's imagination. I only worry that this film is Enrique Urbizu's commentary on parental responsibility and what can happen if you aren't actively watching what your child mentally consumes. To answer my own anxieties, I believe that Urbizu is definitely commenting on the role of parents in kids lives, but that their imaginations are not the real concern, instead it is the outside world that parents should be protecting them from. Also, while children's imaginations are powerful, it is their interpretation of the world that matters and not so much the content or monsters that lurk in their heads.

I really enjoyed “A Real Friend” up until the final scene. I can't spoil it, but it is one of the laziest endings ever thrown onto the end of a movie, that being said, I still recommend it. The plot is so original up to that point and the guest appearances of other horror antagonists are so fun, it's hard to be a horror fan and not admire Urbizu's playfulness.

Altogether, “A Real Friend” is another great addition in the “6 Films To Keep You Awake” series. While “Spectre” was a turn on the classic 'witch who lives down the street' folktale, “A Real Friend” takes the talking animals from a Disney movie and turns them into classic horror antagonists. I'll admit, after seeing this film, I was being followed by my own imaginary Leatherface who chainsawed slices of birthday cake at my office, while Nosferatu fixed the soft drink machine. It was wonderful.