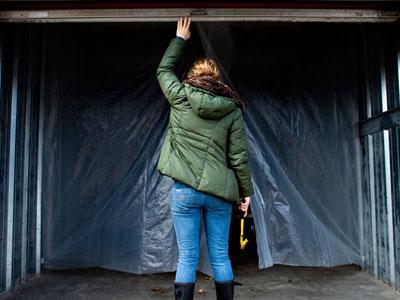 I think Adam Wingard has a lot of talent. His shooting style, shot selection and ability to coax from performers the most aching moments of raw emotion are gifts that should be acknowledged in any filmmaker. He also clearly knows the type of stories that he wants to tell and the approach that he wants to take with them. His latest film “A Horrible Way to Die” deals with the loss of self. Not in the Buddhist, relinquishing self on the path to enlightenment sense, but rather in a much more traumatic way. This is the loss of esteem and confidence that accompanies a series of choices and circumstances that bring with them unforeseeable hardships. These are the sorts of trials that often lead the victim/survivor to believe that they are fundamentally flawed and unworthy of love and goodness.

Wingard’s story tackles these ideas from two vastly different perspectives. The first perspective we are given is that of serial killer Garrick Turrell. Turrell is a self-aware sicko who is compelled by uncheckable demons to dispatch his victims, despite what often seems to be a strong desire to stop killing. We meet him as he has escaped from custody and embarked on a murderous collision course with our second shattered soul, that being his ex-girlfriend and accuser, Sarah. Sarah is 12-stepping her way back from a prolonged submersion in drink and self-loathing. Her tattered conscience is just starting to take shape again after a long court trial that put her former lover behind bars for what was supposed to be forever. Sarah has met a gentle and attentive young man named Kevin in her AA group and is starting to believe that she might have enough love in her life, not just for herself but for another person as well. As her trust grows in Kevin, Turrell, boiling over with a volcanic fury, closes in on the tiny town where she is trying to rebuild her life.

Adam Wingard’s film “Pop Skull” was a protracted exercise in high level, low-budget technique and an absolute chore to watch for those who are not in love with shiftless, navel-gazing protagonists. That said it did have moments where Wingard skillfully posited the realities of living through the horror of hopelessness and decimated self-worth. “A Horrible Way to Die” feels very much like an expansion of this theme. It is a vastly better film than “Pop Skull” and one that reels the audience in with two slow reveals on it’s principle players and a promised collision of unrelenting, doleful sickness and delicate new hope.

The lead actors, A.J. Bowen as Turrell and Amy Seimetz as Sarah, are very good and they more than make-up for intermittent stiffness amongst the supporting players. The music, save for one oddly misplaced churchbell, is absolutely perfect and even manages to deepen the narrative conveyance in some of the more intimate moments of Sarah’s struggle. There are some mixed results with the FX work, ranging from outstanding with a mutilated body on a couch to weak with a box cutter to the face. Maybe most impressive is the cinematography, which is simply excellent; aside from an overuse of racked focus in the early going to convey the protagonists’ emergence from psychological haze.

The detracting elements are significant enough to keep from a broad recommendation of “A Horrible Way to Die” This is because at least one of the problems that I think people will have with this movie is that it prizes some components that undermine the horrific nature of what is happening in the story. One particular kill sequence gives us a deeply affecting build where a young victim-to-be pleads for her life in heart-rending fashion. The way that scene plays out however takes us away from the violence at the moment of peak tension presumably to give more insight into the disorganization of Turrell’s scattershot thinking. By making that choice Wingard sucks some of the life and much of the power out of the sequence.

My biggest problem with this film lies in the arena of verisimilitude. Goofy and unnecessary shots of Terrell’s escape from custody and a surprising if slightly annoying ending twist really sabotaged my ability to immerse myself completely in the film’s world. It didn’t ruin it for me but in some ways the denouement slightly cheapened the prior character stuff by lending a gimmicky air to the proceedings. Whether you will agree I can’t say, but I do hope that like me this film leaves you with a sense of promise for an emerging voice in horror, who is telling his stories his way.