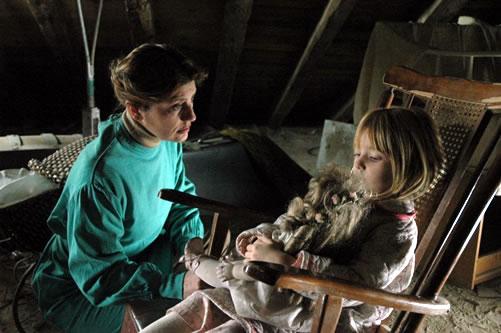 In general, I do not like babies. I like the cute ones, of course, the ones with about as much mobility as a kitten, sure, but above that, I have a general disdain for the newly arrived, which probably makes me the desired audience for “Blame.” Like the recent “Grace,” “Blame” also deals with women's issues. While admittedly “Grace” is more creative in its approach, “Blame” barrels down the 'abortion, love it or hate it' route, with a bland fury.

The film begins with Gloria and her daughter, Vicky, moving in with a fellow doctor and friend of hers from the local obstetrics clinic, Dr. Ana Torres. Ana is thought to be one of the most conservative of the doctors by the nurses in the clinic, but they are either completely wrong, or the translation of the film is bad, because upon moving in Ana eludes that sometimes women come to the clinic wanting abortions, and if they are less than 3 months along, she does the abortions for them. Ana asks Gloria how she feels about performing abortions and Gloria agrees reluctantly to assist Ana if she needs any help.

Gloria is made even more uncomfortable when Ana begins to make passes at her, trying to kiss Gloria goodnight and decorating a room where Vicky can sleep. Gloria also finds out that Ana has had previous tenants, but that they did not stay long and moved out suddenly. Ana's advances become even more forward and upsetting to Gloria, until she discovers that she herself is pregnant and has to face her own decision of whether to keep the pregnancy or have an abortion.

“Blame” is probably the least eventful of the “6 Films to Keep You Awake.” From the beginning there is barely any conflict to start with, there is friction between Ana and Gloria, but not enough to keep you interested. There are several creepy elements in the film, but it's uncertain from the beginning where the film is going. None of the creepy elements ever seem to culminate into a steady move in one direction. Instead it plays like a dartboard, throwing ideas at you and hoping to hit something that will sustain interest, which makes the ending completely unsatisfying. There are no rules set up at the beginning of the film to let the audience know the limits of the film and when the final scene comes, it hasn't given you any logic to build on the unfolding events, and therefore feels unearned. I have an idea of what this film was trying to tell me, but like most pro-life or pro-choice arguments it gets lost in the delivery.

I don't believe that director Narciso Ibanez Serrandor had any intention on making a horror film, or has ever made one to begin with, but I am wrong, because he also directed the 70's film “Who Can Kill a Child?” While I have heard that “Who Can Kill a Child” is solid, the only horror inspired element is a useless recreation of “The Shining's” tricycle scene. Other than that the elements are just not there. “Blame” focuses too much on the relationship between Ana and Gloria, of which, the tension bottoms out halfway through the film. It's all just a red herring that doesn't even sit right as a distraction, because the revelation at the end doesn't make any sense anyway. Agree with its message or not, “Blame” will fall flat for anyone who likes logic and plot.