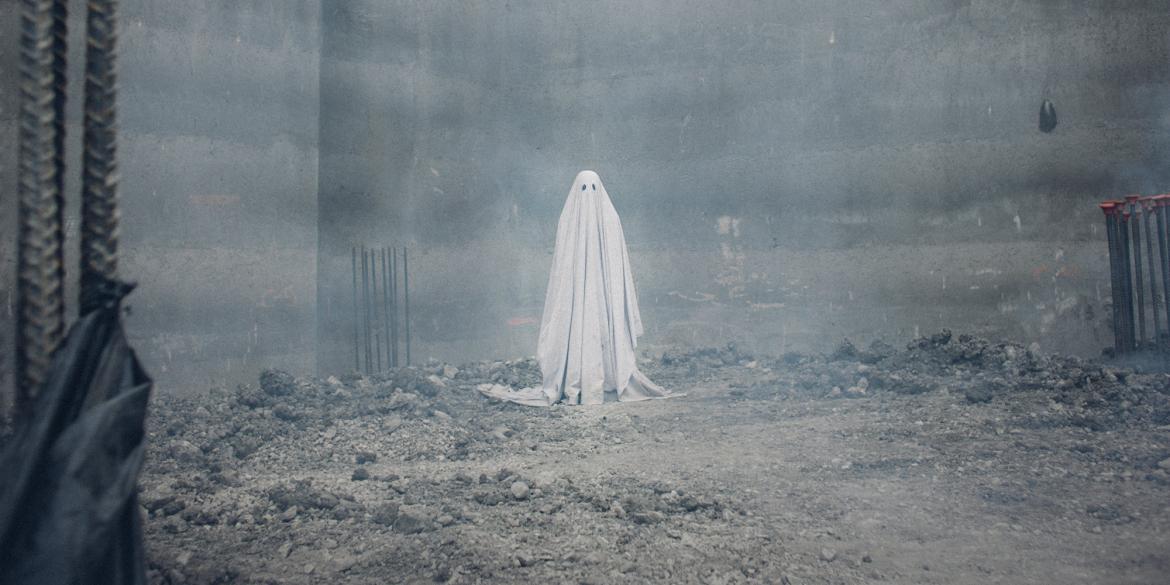 David Lowery’s A Ghost Story is unlike a great deal of films you’ve seen. It’s also hauntingly familiar, something that plays greatly into either your connection or distain for the material. Coincidentally, it’s one of the finest examples of pure cinema, and this decade’s first great entry into the pantheon of almost silent films; yet, one of the most convoluted and indulgent endeavors in film history for its deliberate stylizations.

C (Casey Affleck) and M (Rooney Mara) live in a simple suburban home on a quiet suburban street. Their otherwise plain existence, punctuated by the occasional notes of a piano humming in the middle of the night and loving snuggles on their queen bed, is turned upside-down when C is killed in a car crash outside their house. After M leaves the morgue, C rises from beneath the white linen sheets (don’t bother asking where the eyes come from), and returns to his home to find that M cannot see him, and neither can any living being.

Lowery is determined to make the audience feel as isolated and exhausted as C, wandering through every scene and through time, slowly coming to grips with his fate; yet, he never looses our interest. Most of A Ghost Story is made up of long takes, whether it is (the now [in]famous scene) of Rooney Mara’s M eating pie for a 6-minute two-shot, or just the simple fact that C is bound to live eternity in his cramped house, and moves with the methodical and rigid shuffle of his feet. Two steps could signal a new day, week, month, or year, but Lowery’s pacing rarely impedes the story, and he quickly exploits the film’s timeline with ease and coherence. Lowery edited the film (on top of writing and directing), and his greatest achievements are the transitions between scenes; they’re effortlessly seamless and beautifully jolting, which helps cushion the film’s pacing and structure.

A Ghost Story is best seen as a theatrical experience. Otherwise it is, admittedly, one easily abled to be switched off, or distracted from by Twitter and Facebook feeds. The theater setting and a silent audience bereft of technology helps the film wash over you, and it is remarkable how quickly Lowery achieves this immersion. The film is presented in the 1.33:1 aspect ratio present in the trailer, and rather than call attention to itself, it melts into other images. Walking away, the experience felt akin to a watching a family photo album in motion, or for the hipsters and millennials – an Instagram story filtered through Hudson and Aden (with splashes of saturated greys, blues, and blacks thrown in). Stylistically, it’s a choice of Lowery’s that, again, is going to be polarizing amongst audiences; however, the boxed ratio and muted pallet grows more foreboding throughout the film, even claustrophobic, lending well to the idea that C feels his existence to be endless. The stylization of claustrophobia is heightened when C discovers that he can travel through time, whether it’s the past when the house he and M inhabited was first built, or when he witnesses the banter of new tenants. Sadly, he has no control to change his fate or the outcome of time, and his greatest challenge is to accept what is.

A Ghost Story’s greatest fault, though, is that the sound and dialogue unnecessarily punctuate the tranquility on screen, and often is cringe worthy when it delves into expositing its themes. One could argue that sound is equally alarming for C, who is visibly startled every time by the appearance of another character. It serves to heighten his alienation, which is occasionally remedied by the presence of a ghost opposite his house with whom he communicates with only by sight. Whatever Lowery’s intentions may have been, a silent cut of the film would, perhaps, be a more fluid experience and expertly used the medium of film to tell a story solely through images instead of words.

Lowery deserves credit for A Ghost Story's unwavering brashness; his film will be sappy and sentimental for some, and for others, a piercingly horrific and heart-wrenching exploration of denial, acceptance, and love. Over the course of 92 minutes, Lowery constructs one of the most personal and affecting film-going experiences in years, and it’s frustrating because the final product is as rough around the edges as it is brilliant in concept, soul, and most of its execution.