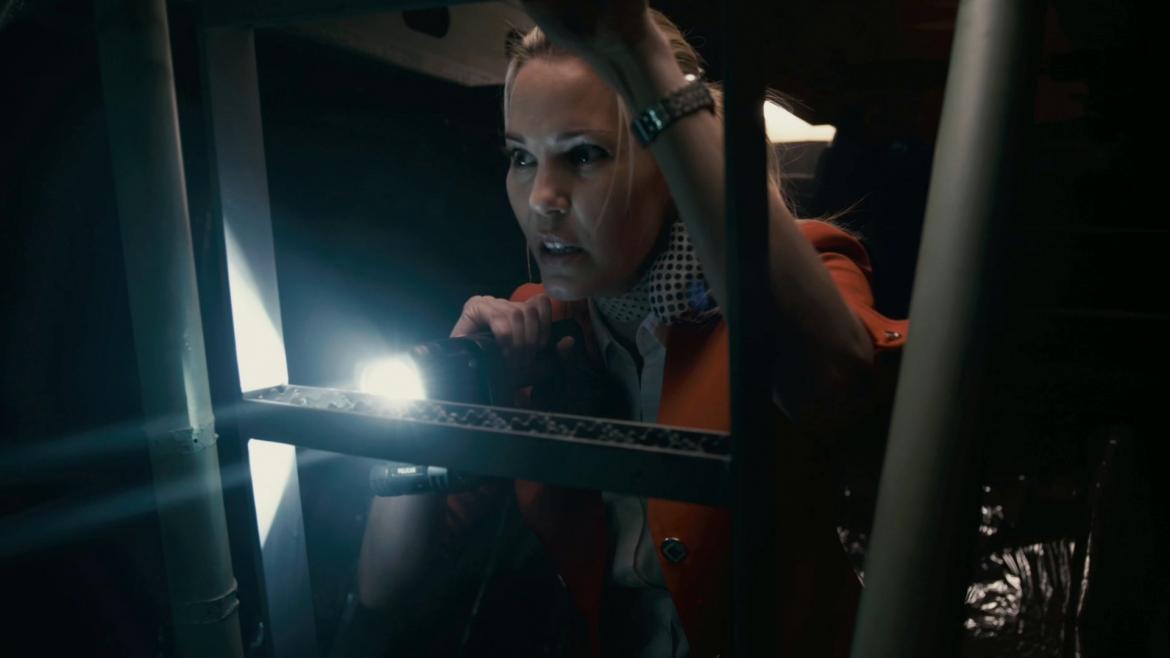 There is a reason that airplanes have been the setting for many horror and thriller movies. Much like the haunted house or the cabin in the woods templates, an airplane is Hollywood shorthand for claustrophobia. With this setting comes inherent rules, and the filmmakers can save time explaining to us why our protagonists are trapped and antsy. Strangers are stuck together in a hunk of metal hurtling across the sky with absolutely no hope of escape until they have reached their destination. And if that isn’t stressful enough, there is the added fear that at any moment the science that holds the plane in the sky will cease to exist and you will have a long way to fall. Within the first act, 7500 creates set pieces which explicitly point to both of these fears.

After a bout of turbulence a passenger complains that he can’t breathe and, despite the best efforts of the crew and other passengers he dies. Facing the knowledge that they are now sharing limited space with a dead body, everyone aboard Vista Pacific flight 7500 becomes acutely aware of just how trapped they are. When they hit a second patch of rough air, the cabin loses pressure and the scene is set and ripe for some supernatural shenanigans. Passengers begin disappearing from the flight while others start seeing and hearing things that aren’t really there.

With a run time that doesn’t clock in at much over an hour, 7500 still somehow finds ways to drag. While it manages to work in a few clever jump scares—including one from the trailer where a flight attendants gets pulled up into an overhead compartment by a pair of ghoulish hands while many of the passengers look on in horror—a lot of the more subtle scene-building elements that are intended to elevate the anxiety and further the story do not reach their desired effect. When the twist is finally revealed, it doesn’t necessarily feel like all of the bread crumbs that were meant to get us there justify where we end up, and some of the more interesting plot points don't get explained to a satisfactory degree. In the hopes of avoiding too many spoilers, let me say that where this film was trying to go could have been interesting, if it had only doubled down and spent more time with some of the folklore that it hoped to employ.

The cast of characters on board comes just about as close to derivative as it can without falling completely over the edge of believability. There is a married couple that is about to call it quits, two beautiful young stewardesses who are both struggling with their respective love-lives, newlyweds on their honeymoon, a scary goth girl, and others. The fact that these archetypes mostly avoid being total cliches is, no doubt, thanks to the impressive cast, with a billing which includes Ryan Kwanten (True Blood), Amy Smart (Mirrors), Leslie Bibb (Hell Baby), and Jamie Chung (Sucker Punch), Scout Taylor-Compton (Rob Zombie’s Halloween), and even Turtle from Entourage.

Unfortunately, fans who have been anxiously anticipating the most recent English language film from director Takashi Shimizu (The Grudge) will have to keep waiting. Much like the airplane at the heart of the story in 7500, this film seems to have lost contact with air traffic control. After the trailer appeared back in 2012, the release date has been pushed back several times with little to no explanation. One would assume that this film had to have a pretty substantial budget, considering its cast and the visual effects used but, at this point, it seems to simply be gathering dust somewhere. If Shimizu's style appeals to you, keep checking the web and hopefully this movie will be cleared for lift off sometime soon. That was the last airplane metaphor, I promise!