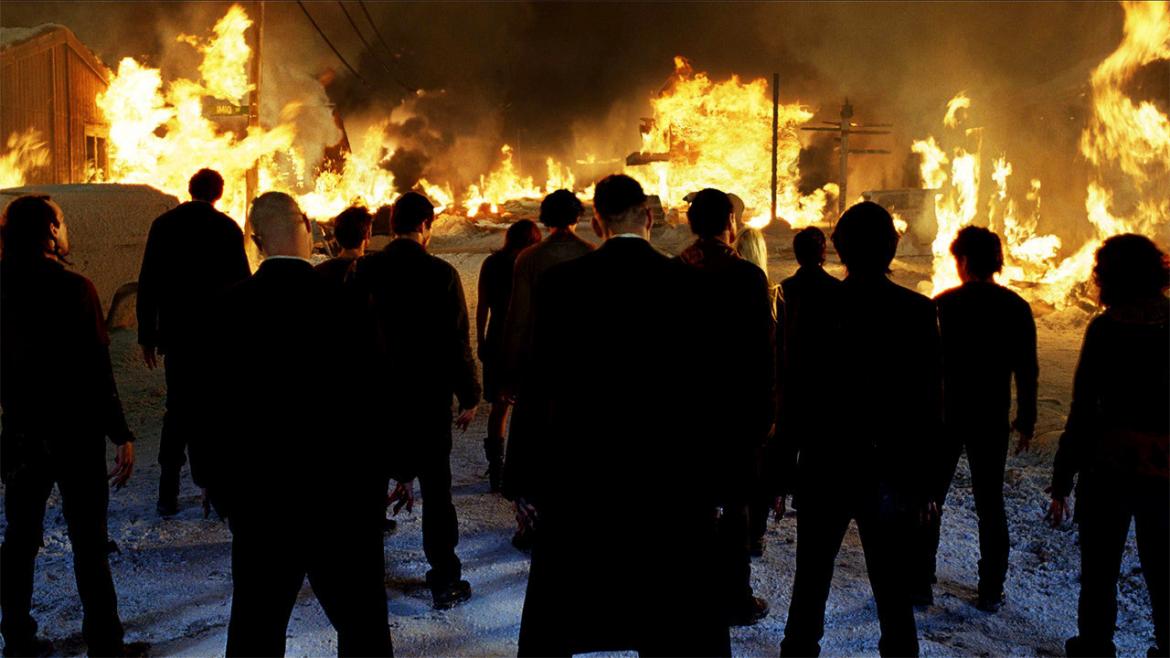 It feels good to be right, doesn't it? Of course predicting that "30 Days of Night" would be the best release this fall wasn't exactly a stretch of the imagination, but I'll take any opportunity to pat myself on the back. With that said, the vampire film has gotten a major overhaul, and it's definitely for the better.

"Days" centers on a small Alaskan outpost town on the last day of light before a 30 day period of darkness. A general chaotic mood is afoot as the credits open because many of the residents are getting out of town for the dark period, and so there's a mad rush to get to the airport. It's during this rush that we meet our characters. Josh Hartnett plays Eben, the town's sheriff who also happens to be estranged from his wife, played by the toothy Melissa George ("Turistas", "Amityville Horror"). As the town's population dwindles, the main cast begins to be filled out by the likes of Eben's brother, grandmother, and a handful of neighbors needed to pad the body count.

When a filthy drifter starts some ruckus in the local diner, Eben arrests him and takes him back to the sheriff's station. While there he does what most filthy drifters do in these situations, he begins to spout off ominous warnings. Apparently "they" are coming to "destroy" the residents of the town. A cheery warning for sure, but it got me to wondering, why are these types always so vague? Is there a reason why he couldn't have just said, "these vampires are here and they're going to eat the crap out of you?" But I digress.

Pretty soon random town folk start to be picked off one by one, and in spectacular fashion. When it finally becomes apparent to sheriff Eben that something is wrong (the power going out and all of the blood stains were a pretty good clue) he gathers up what survivors he can to try and come up with a plan of action. It's slow going however, because the vamps are everywhere in town and going outside seems to be a sure way to become a snack for one of them. They decide if they can make it to a big supply bunker on the edge of town, they can barricade themselves in and last out the rest of the 30 days. As can be expected, they run into a few complications along the way.

"30 Days of Night" has officially done for vampire films what "28 Days Later" did for zombies (just noticed the title similarities too). It's taken vampires out of the pristine, aristocratic world of Stoker's bloodsuckers and brought them into the modern day... by making them crazed flesheating freaks of nature. They run, jump, scream, eat anything in their path and generally appear to have near superhuman strength. In fact, with the exception of their speed, they really resemble the Max Schreck type of vampire from 1922's "Nosferatu" than anything we've seen up until this point. One could even make the argument that the antagonists in this film are more like really agile zombies than anything vampiric, but I'm getting off the topic again.

The cinematography here is amazing. The Alaskan setting that Niles provided the filmmakers with is the pitch perfect background to tell this story. There are some beautiful overhead shots of the town, all lit up during snowstorms, that are at the same time beautiful and menacing. It's hard to reconcile the tranquility of the backdrop with the horrible things that are happening. During one scene one of our vamps is on top of a speeding car, seen only in silhouette in front of the horizon as he is trying to pound his way into the vehicle. A few moments like this actually took my breath away, because they just looked that good.

There were other moments that took my breath away that had nothing to do with the look of the film, because it seemed like there were jump scares around every corner. I can only describe the system of attack these vampires use as "shock and awe." Literally, David Slade does everything he can to make every scare as visceral as possible. It's nice this day in age, when it seems like we're so desensitized to everything to see a filmmaker who can still scare the crap out of us. Ask my buddy Manny, who threw his hands up over his face like a girl several times during the movie... it was scary as hell.

The cast does a great job with the material too, especially Hartnett. I think we were all doubting his capability of carrying the role of a gruff sheriff, but I have to say he did a great job. Not once did he do that bizarre 'scrunchy face' thing he usually insists on doing in his films. He seems strong and tragic, something which the ending obviously reinforces. And as a warning, don't go looking for anything too cheery in the ending department. Although I found it was the perfect cap to the preceding events, a whiny teenager in front of me on the way out seemed to hate it. I couldn't help but think of the way that John Carpenter's "The Thing" was panned at the time of it's release because of it's similar downbeat ending. Just goes to show the general movie going audience hasn't gotten any smarter.

If forced to explain why this movie gets a 9 and not a 10, there are two nitpicky things I would have to cite. First off, the backstory concerning the drifter (and the vandalism) is hinted at but never really fully explained. It bothered me a little, since he played such an integral part to the beginning events of the film. I also would have been interested to find out the vampires' origins, something which was apparently covered in the comics. Here though they just show up and rip shit up, which has it's good and bad points. To be honest though, when it was all said and done neither of these complaints led me to like this film any less.

I really had to stretch to find anything that I disliked about "30 Days of Night", and that's why I'm positive that this film will go on to do some major bank at the box office. And rightly so, because it's not only the best release this fall, but EASILY the best release of 2007. It's intense, heartfelt, gory as hell, and above all else, a beautiful visual experience to behold.