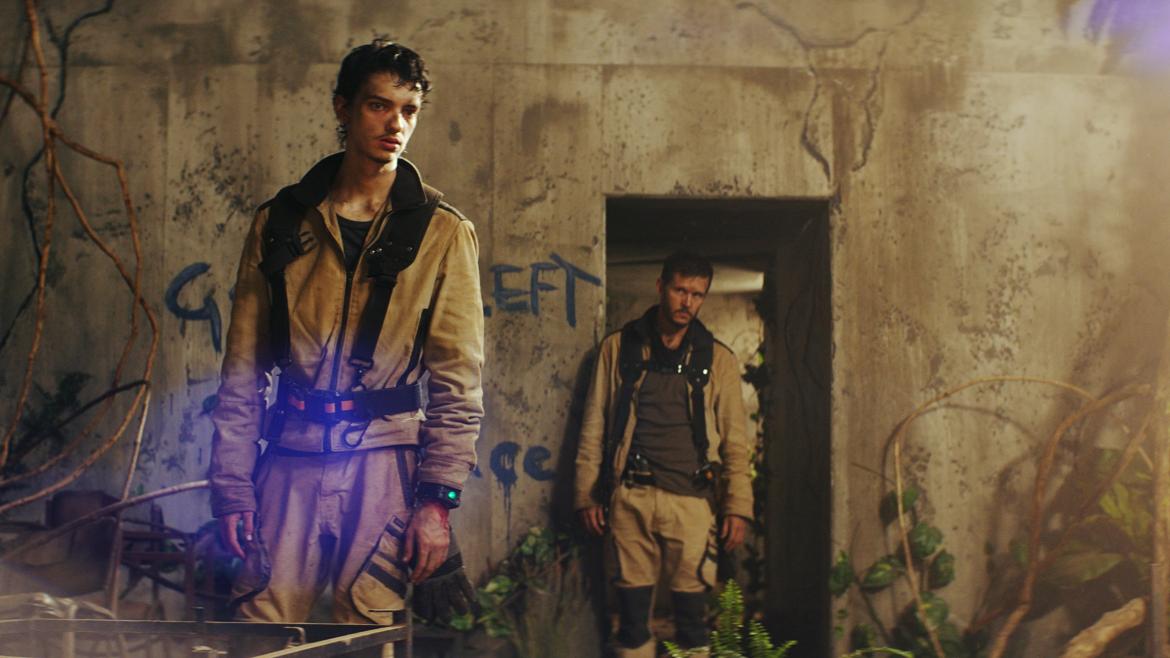 As Seth Larney’s 2067 opens we see Earth rotating in space as a cacophony of broadcast audio fills the soundtrack. The audience hears reports of rampant environmental degradation which eventually blend into an emerging epidemic. As the reports continue we see what appears to be gigantic fires careening across continents, consuming both forests and knocking out broad swaths of power before the planet is enveloped in darkness. It’s the stuff of overblown high concept sci-fi and so, so eerily present in our lives.

This grim prologue positions Larney’s science fiction thriller as a story about the greatest of stakes before diving deep into the bowels of an Australian city where a pair of engineers casually tinker with coolant valves to a nuclear reactor. Ethan Whyte (Kodi-Smit Mcphee) and Jude Mathers (Ryan Kwanten) wear face masks and respirators which are revealed to be just as necessary on the surface. We learn the Earth’s surface is depleted of oxygen and what is left of humanity relies on an artificial oxygen produced by the Chronicorp corporation. But there’s a catch; the artificial O2 is causing an unknown sickness that now plagues a large population including Ethan’s wife (Sana'a Shaik). Ethan is called upon by Chronicorp to participate in an experiment that will send him 400 years into the future to a civilization that may have developed a cure and restored the planet's environment. Why Ethan? Apparently someone in the future is asking specifically for him.

2067 is a thoughtful if not busy film that draws inspiration from a myriad of other pieces of science fiction. The structure of Curaòn’s Children of Men is recalled in the film’s opening act of violence by a protestor and in the film’s overall themes. Nolan’s Interstellar is another more apparent influence in both Ethan’s arc and in the film’s third act. Once Ethan and Jude arrive in the 25th century, they make their way through a massive forest grown on the skeleton of the city, a sequence recalling Naughty Dog’s Last of Us series in more ways than one. These references in and of themselves don’t necessarily make for a generic experience. But like the vines twisting through the concrete girders of buildings, it's difficult to shake how much 2067 relies on the structure of its predecessors.

This derivative quality is most present in the dialogue and score. There’s little wit or insight into who these characters are. Like the handheld device Ethan carries that resembles a Siri enabled smartphone, these characters are a dressed up version of something we’ve already seen. By the film’s second half, dialogue is mostly relegated to command phrases or exposition flashbacks provided by holographic records as needed. The score continues to insist itself throughout the film, making sure you’re cued into exactly what we are supposed to be feeling.

2067 also has an odd thread of manifest destiny spooling throughout. The only people of color in the film are either villainous, suffering bodies, or are prepared to abandon Earth -- a stance the film is morally opposed to. The disembodied call to “Send Ethan Whyte” may as well be an astral plea for the “white” savior. Ultimately the film lands on the importance of altruism but the path it takes to get there is fraught and worthy of inquiry.

Prior to taking on feature direction Larney cut his teeth in the visual effects department of numerous films. His experiences there certainly shows in 2067’s expansive world building and effects work. While the film may borrow components from other stories it succeeds in crafting some unique and resonant images of its own. As Ethan and Jude reach the overgrown city they encounter a skeleton wearing a respirator mask hooked up to an artificial O2 dispenser that resembles a gas pump. It’s a stark and striking visual metaphor that hits like all good pulpy, big sci-fi. Ethan’s journey through space and time is another stand out sequence that employs a very effective combination of landscape imagery, lighting, and a performance from Smit-McPhee that makes the vertigo of time travel real.

Larney’s self proclaimed project here is to make a film about hope and faith in the possibility of the future.(1) For the last several years the projected effects of climate change continue to become increasingly apparent. In spite of this, those in power insist that science just “doesn’t know.” It’s a brazen bit of collective gaslighting that allows them to ignore what we see everyday as fires raged across Australia last year and in North America today and as air pollution disportionately affects communities of color.(2)  As an attempt at and reminder of hope in science, 2067 has a place in the world. However, with its dodgy script and derivative elements, 2067 doesn’t have the tools to match it’s accomplished visual artistry and loftier ambitions.

RLJE Films will release the sci-fi/thriller film 2067 In Theatres, on Demand and Digital on October 2, 2020