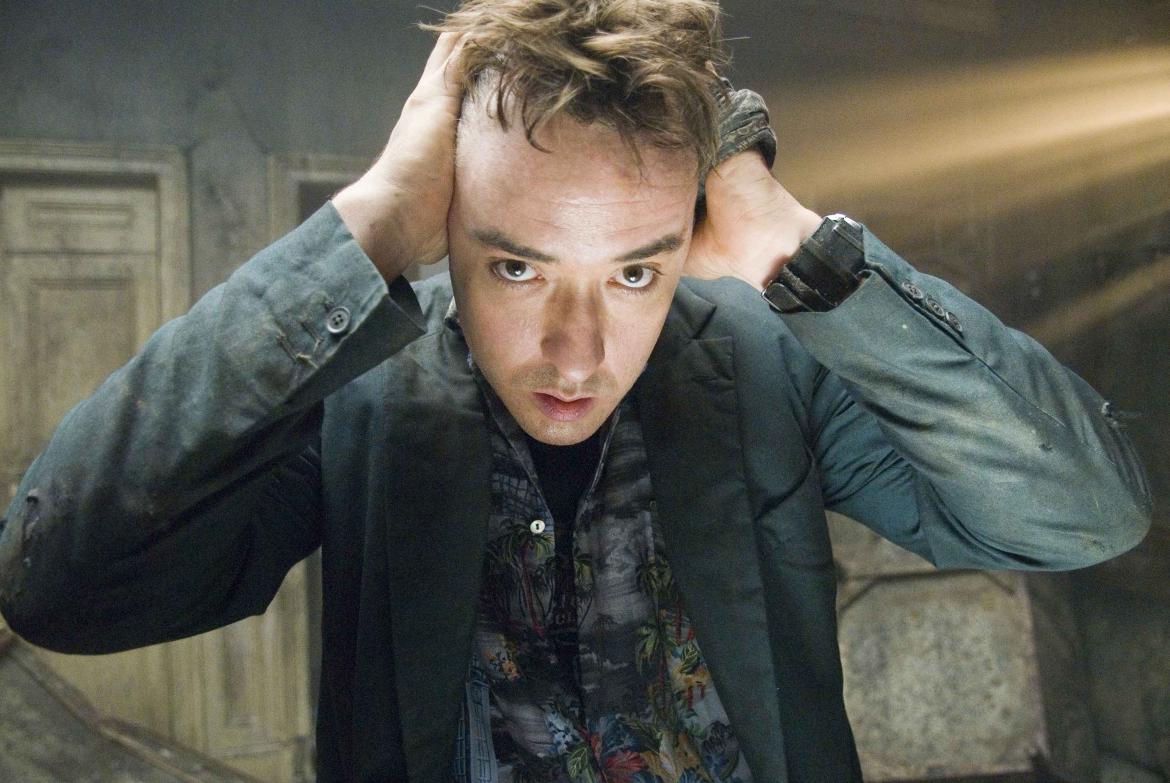 "1408" is a summer fear flick that certainly has the pedigree worthy of a horror classic. It has everything going for it. You've got a story by the legendary Stephen King, some great lead actors like John Cusack and Samuel L. Jackson, and some solid direction from Swedish director Mikael Håfström. Does this strange brew mix together to form a summer blockbuster? Read on and find out.

Cusack plays Mike Enslin, a semi-alcoholic (and fully depressed) writer whose books cover haunted hotels across the United States. As the film starts he pulls in to one such hotel, and we watch him as he tries (in vain) to find something remotely spooky about the place. As he says, ghost stories make for convenient advertising when the interstate moves away. As we learn almost from the start, Eslin is a dejected shell of a man. He's an intelligent and gifted writer who seems to have no faith in what he is actually writing about. He believes in nothing, especially God, and this is what causes him to take his next assignment so lightly... stay a night in room 1408 in the Dauphin hotel in New York City.

He learns of the hotel while sifting through a stack of mail, mostly bills and gaudy brochures from mom and pop hotels across the country sent to him in an attempt to lure him there for some free publicity. Among the stack he finds a lone postcard with an ominous note scrawled on the back... "don't stay in room 1408." Intrigued, Enslin calls the hotel and receives an unsurprising cold shoulder from the receptionist. It turns out the room has a nasty history and they have no intentions of letting ANYONE stay there any time soon. After finding an obscure discrimination law on the books that says the hotel has to book him if the room is open, he travels to New York and checks in.

It's at this point that he's asked by the hotel's manager (Sam Jackson) for a brief meeting in his office. The following exchange between Jackson and Cusack is a treat to watch. It's rare that two actors this talented and charismatic get to engage in a battle of wits such as this. Cusack is smug and ironic and entirely convincing as the down and out writer, and Jackson is great fun as the manager with an ominous message. "That room is fucking evil", he says, as he continues to warn Cusack of dangers and all of the people who have perished there. Undaunted, Cusack gathers his key (and an $800 bottle of booze given to him by Jackson) and enters the elevator. He pushes the old fashioned key into the lock and begins to turn. We see the inner workings of the lock as it twists and gives way to room 1408. The stage has been set.

The first act of the film does it's job more than adequately. It sets the audience up and works them into anticipation for the thrills and chills that are sure to come. Then the film proceeds to bludgeon us over the head for about an half an hour with every ghost story cliche ever put to film. You can almost write this stuff yourself. The alarm clock goes off, oh no! It's playing an usually harmless song but now it's scary, oh no! Things ramp up and Enslin eventually sees everything from his dead father to ghosts throwing themselves out the window. It's all interesting stuff but the viewer can't help but begin to feel numb about 10 minutes in when you realize that it's not letting up. It's hard to build any real suspense when it's just money shot after money shot. With the exception of a great little scene with Cusack on a window ledge, there wasn't much I found all that scary here.

"1408" becomes much better when it begins to play on it's strengths, which in this case are a hefty emotional subplot and Cusack's acting ability. Mary McCormack (of "Private Parts" fame, among others) is rock solid as Cusack's estranged wife. As it turns out, Enslin lost a daughter a few years back and was too messed up by the whole incident to stick with his spouse. The evil in the room, not wanting to miss an opportunity for torment, recalls the images of both his daughter and wife in an attempt to break him. It's these scenes that had the most impact on me, not the popcorn jump-scare stuff which unfortunately took up most of the first hour.

In a gut-wrenching scene towards the end, Eslin's daughter appears before him and he drops to his knees. He holds her in his arms and begins to cry, assuring the young girl that everything is going to be alright. It's at this point that she turns to dust, literally crumbling in his arms. A hush fell over the audience. Cusack is not the most convincing actor out there when it comes to being scared or frightened (he's too funny for his own good) but the man is rock solid with raw human emotion.

"1408" probably has enough corny jump-scares to satisfy the hunger of a summer audience clamoring for suspense. For some however, you may find the emotional angle between Cusack and his daughter to be the real draw. I certainly did. And I certainly didn't find all that much of it scary, although there are a few creepy spots and a general unsettling feeling that does run through the entire movie. This is probably the kind of story that works much better in print, but then again that seems to describe most King stories. For the jaded horror fans out there this one is recommended, but only as a DVD release.