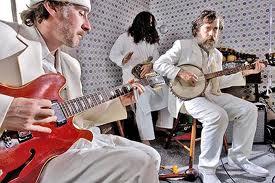 All My Friends Are Funeral Singers (Movie Review)

Angela Bettis plays Zel, a psychic who lives in an old house on the outskirts of town. If you want to talk to your dead husband or get a hot tip on the ponies, Zel’s your girl. The truth is that Zel isn’t able to see the future and doesn’t have some in-born ability to channel the dead – she just happens to live in a house filled with ghosts which can only be seen by her. The ghosts are helpfully dressed in all-white clothes that give us some insight into who they were when they were alive. Among others, there’s a priest, a suicidal bride, a mute little girl and an entire bearded indie rock band (more on that later). Zel’s undead companions help her to perform readings and conjure dead loved ones and the whole she and the ghosts live in relative harmony, no small feat considering that she essentially has a dozen roommates who mope around, don’t pay rent and spend most of the day making noise like a drum circle made up entirely of Joaquim Phoenixes after Memorial Day. That kind of thing is all fine and good for college but a little harder to put up with in adult life.

Things change when a mysterious light appears in the woods in the distance and the ghosts begin to think about moving on. Friction arises between them and Zel because they blame her for trapping them on earth and not allowing them to move on to the afterlife. Zel insists that she isn’t doing anything to keep them here and that they are free to go anytime they wish. Eventually, Zel discovers some of her dead grandmother’s secrets which reveals why the ghosts are there and the true identity of some of them.

It’s hard to say much more about the story of the film because that’s pretty much all there is. The truth is that “All My Friends are Funeral Singers” is basically a vanity project for the band Califone (hence the bearded indie rock ghosts who are playing music in practically every scene of the movie). It was directed by the band’s frontman, Tim Rutili, and the first half of the movie consists mostly of short vignettes with the ghosts talking directly to the camera in reality-show confessional style interspersed with scenes of Califone the friendly ghost-band playing songs from their latest album, coincidentally titled “All My Friends are Funeral Singers”. For those unfamiliar with Califone’s music (as I was) it’s mostly instrumental, fairly cinematic and not bad at all, although a feature movie is probably not the best introduction to the band. This movie is probably a great treat for Califone fans; for the rest of us, it’s a like watching an above average student film.

Judged as a feature instead of a long form music video, there’s honestly not much to recommend the movie. Angela Bettis is as good as ever but with such flimsy material it’s hard to get too invested in her story. This is firmly in the tradition of pretentious arthouse films and if a slow-paced, plot-light, talky film with a droning indie-folk soundtrack doesn’t sound like your cup of tea, then this movie is not going to win you over. Some people might enjoy the lyrical tone but I suspect most people will just be bored. The first-person interviews and jerky hand-held camerawork also feel like odd choices for this film. In one scene a character launches into a long monologue about the similarities between the assassinations of Lincoln and JFK. Why? I have no idea, other than because that’s the kind of thing characters do in this type of movie. Hey, it worked in “Slacker”.

As a movie, “All My Friends are Funeral Singers” is probably not worth your time unless you’re a Califone super-fan. It’s kind of dull, not much happens and it’s easily ignorable. On the other hand, it would work quite well as background entertainment.. If you’re into this style of music there are some quite nice performances and you can just ignore all the ghost talking head nonsense. Maybe you could say this about all dull movies, but this one probably works best if you don’t actually pay attention to it.

The Curse of Sleeping Beauty