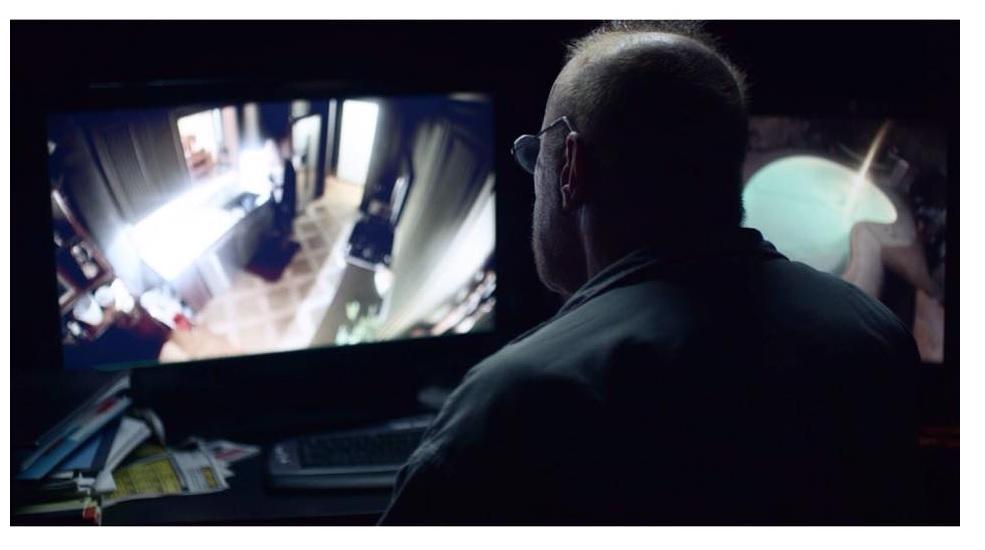 Some of the most effective horror movies exploit some of our basest fears. Rather or not they wind up being clever or memorable is an entirely different story. 13 Cameras is a film with its crosshairs on a very specific demographic it's looking to help into having some sleepless nights- renters with landlords. People who live their day to day lives knowing but trying not to focus on the fact that, in many cases, a stranger also has 24/7 access to the home they're living in.

Ryan (PJ McCabe) and Claire (Brianne Moncrief) are a newlywed couple with a baby on the way but are in the midst of a rough patch in their relationship. Looking for a new start they move cross country and rent a house owned by Gerald (Neville Archambault). What the couple does not realize is that their new landlord has placed hidden cameras all over the house and pool so that he can carry out his pervy needs from a remote location. To make matters worse, he lets himself into the house when they are gone to add new cameras, soundproof the basement, and any other action his skeevy heart desires.

13 Cameras is the very first credit to Victor Zarcoff's name as both writer and director. The content that he is working with here is dark and dirty, but treads in place a little too long leaving the impression that the subject was fit more for a short than a feature length film. One of the main reasons the film struggles to justify its length is simply that the two leads just don't have much chemistry on screen. McCabe doesn't come off as a strong performer so Moncrief often overshadows his acting chops. The combination of the two just doesn't give much wiggle room by which the audience can connect to the extent of their marital issues. Claire is the film's sole sympathetic character and it's incredibly tough to watch all the terrible things that are happening to her that she's completely oblivious to. Between her husband's douchebag personality and an old dirtball getting his jollies off watching her shower or Ryan parading around his hot young assistant while Claire is gone, the idea that this film is full-on misery porn is unshakeable.

To the film's credit, the heebie jeebies are accomplished to a significant degree. The pervy landlord played by Archambault is characterized in great detail thanks to comments on behalf of Ryan and Claire. He smells like sweat and feces, limps around, has a weirdly shaped body, disheveled hair, a gravely voice, and to say he's socially awkward is an understatement. Самые щедрые бонусы казино на депозит вы найдете только у нас So when Gerald does something like, put Claire's toothbrush in his mouth, and she uses it later then describes how bad it smells/tastes it becomes tough to suppress the gag reflex.

13 Cameras accomplishes exactly what it sets out to do without ever really setting itself apart from other films like it. With the "ick factor" turned to 11 it is sure to make you want to shower afterward, but you'll be ready to do so long before the final credits.

Note: Screened as part of the 2015 Fantasia Film Festival under the title Slumlord