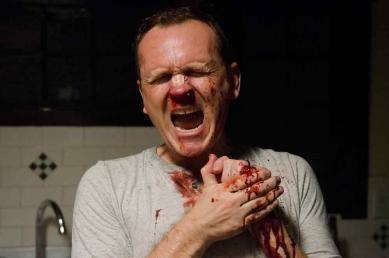 Cheap Thrills makes for the edgy, black comedy that leaves you in stitches throughout but at the same time makes you feel like an utter bastard for enjoying yourself. For his first feature film EL Katz taps into the very real economic fears that weigh heavily on the mind of audiences that live from paycheck to paycheck and sweat bullets wondering if the direct deposit will go through before the utility bill clears. It's a movie for anyone that has ever exited their apartment via the fire escape the first few days of the month in order to avoid a pissed off landlord in the hallways. If you have ever experienced the above, Cheap Thrills will resonate with you.

The films starts by lulling its audience into a false sense of comfort. New parents Craig (Pat Healy) and Audrey (Amanda Fuller) enjoy trying to squeeze in an intimate moment at sunrise before the siren wail of their newborn son signals the start of a new day. It's obvious from the casual intimacy the duo share that there's a lot of love in the apartment. It's not until Craig leaves for his mechanics job that the first sign of trouble rears itself in the form of a final past due notice tacked to the front door. Craig needs fast cash or face the prospect of putting his family on the street. He fares no better at work as he's unceremoniously laid off due to cut backs. Stressed out and unwilling to face the music at home he heads to a local dive bar to wallow in a few drinks before heading back.

It's here that Craig bumps into his high school running mate Vince (an unrecognizable Ethan Embry). The two commiserate over drinks. Vince works as a debt collector for local thugs and Craig's once promising writing career fizzled out. Between the two of them there's barely a pair of nickels to rub together. The course of their lives take a turn for the surreal when they bump into a brash rich couple out slumming it. Colin (David Koechner) and Violet (Sara Paxton) are out celebrating her birthday and they take the broke buddies under their wing. While the lovely bride can't be bothered to lift her nose from her smartphone's screen, Colin starts pouring multiple rounds from $300 bottles of tequila and offering cash to whoever slam down a shot the fastest. All the while Colin is peeling off large bills and making a jack ass of himself, simply because he's rich and he can. Plied with booze fueled courage, the two friends are embarked in games of one upsmanship. Whoever gets slapped the hot mess at the bar earns a couple hundred bucks. Whoever smacks a stripper on the ass earns a couple hundred. Craig earns a cool five hundred bucks for cold cocking a bouncer.

After Craig wakes up with a busted face in Colin and Violet's mansion (courtesy of a beating at the hands of the enraged bouncer), the games and the film kick into high gear. Colin sets out a series of challenges that are at first humiliating before raising the stakes and the cash considerably. Friendship is tossed aside at the prospect of earning large slices of the two hundred and fifty thousand dollar pie the couple sets on the table. Craig and Vince engage in a series of challenges that escalate in violence and emotional trauma. Craig in particular is an almost unrecognizable lump of bloodied flesh as things progress, but desperate for cash there's nothing he won't put on the table in order to win no matter the cost to his physical or emotional well being.

Cheap Thrills works because the script is brilliant and packed with hysterical dialogue while the four principals pour everything they have into their respective characters. Co-writer Trent Hagga (Deadgirl, Chop) continuesto demonstrate a knack for blowing the smallest of bad decisions out of proportion until a situation spirals out of t control, leaving the principal players white knuckled and screaming along the ride until their speant and discarded like yersterday's trash. . Koechner is flat out brilliant in taking the his blowhard schtick to the next level. Sara Paxton isn't given much to do except looked bored and lovely, yet she delivers a fantastic monologue at one point that delivers a keen insight into how much of a sociopath lurks under her icy demeanor. Healy amazes with what he does with the role. He manages to elicit sympathy one moment and revulsion the next while selling the shit out of Craig's desperation. The family man we meet at the outset has been obliterated by the credits, wiped out by a litany of pain, corruption and flat out greed. Despite this sea change, Healy lends enough humanity to the role that you can't help but root for him.

While Cheap Thrills is often uproariously funny, Katz delivers very uncomfortable humor.By rights we shouldn't be laughng at pitable misfortunes of Craig. Colin embodies every cliché of the “asshole with money” we outwardly despise but secretly fantasize about being. Craig has no problem flaunting the rules because he knows he can throw enough bills on the table to do as he pleases. While we might believe we're on the side of Craig and Vince, Katz tips the audience to the point of view of Colin and Violet. Throughout Cheap Thrills, we're laughing at the schmucks mutilating themselves for our entertainment. In reality, the target crowd should empathize with the down and out family man Craig as he goes through punishing lengths just to keep his family off the street. The events wear him down until there's no vow he won't break, no moral code he won't disavow and now task he won'tundergo in order to get his hands on a bag of filthy money. Watching the desperate maim themselves serves its purpose as an updated form of entertainment as old as tossing christians to the lions.

We're only at the quarter pole of the year, and yet I'd be stunned if there are going to be many films I love as much as Cheap Thrills from here on out. Along with The Battery and Resolution, the film represents the best of what the genre can offer when it comes to smart, socially relevant commentary. It's a film that subverts your expectations throughout, and delivers a wallop of a gut punch at its climax. Due out later this year from Drafthouse films, it marks one of the few “must see” indie releases of the year. If you love your humor as black as your coffee, then Cheap Thrills is an unapologetic trip down the most mean spirited road of humor you can travel.