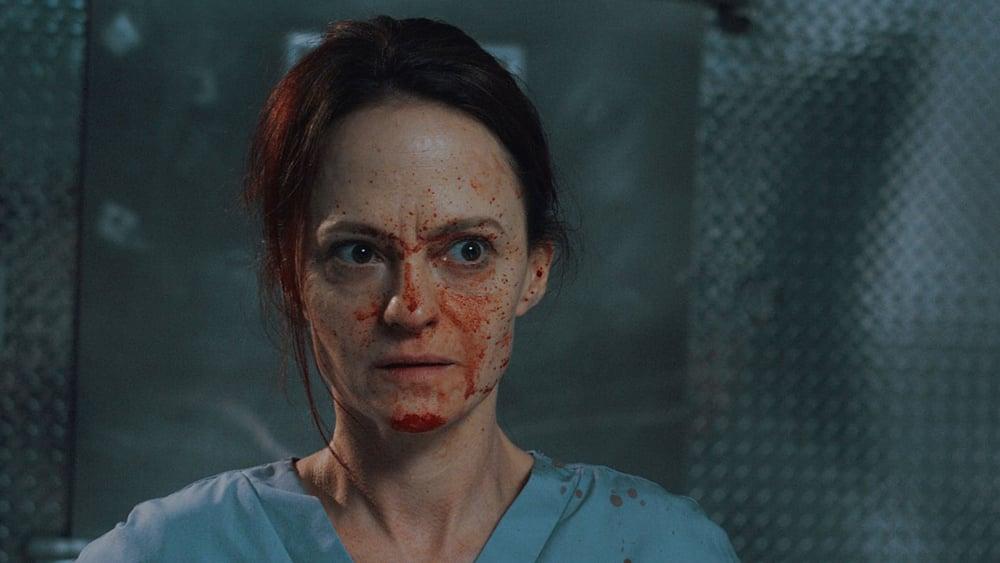 Brea Grant rolled into 2020 on a mission. The multi-hyphenate filmmaker has four movies that have either premiered or have been released so far this year. For 12 Hour Shift Grant steps out from the spotlight in front of the camera and takes a seat in the director & writer’s chairs, proving she’s a gifted talent on every side of production.

Mandy (Angela Bettis) is a drug addicted nurse who works at a small local hospital while also playing a part in a black market organ scheme. When a clueless organ smuggler, Regina (Chloe Farnworth), botches a pickup, the hospital descends into chaos as Regina begins wrecking havoc trying to secure a new kidney. Mandy struggles to assist with replacing the organ in order to reduce the damage caused by Regina’s rampage.

12 Hour Shift is largely a comedy of errors relying almost entirely on the outrageous circumstances, plot turns, and elevated reactions of the cast. To Grant’s credit, she stages numerous predicaments with great skill, allowing the progression of events to slowly escalate and converge at the right moment to maximize the comedic effect.
Angela Bettis’s performance feels authentic to the material and the actor brings all the dynamism that has endeared her to genre fans. Her “enough already” attitude drives the plot forward while Farnworth’s ditzy southern belle with a maniacal determination helps to escalate the stakes. The supporting cast possesses a mixture of behavior that’s tailored to the irreverent humor Grant is going for here. From David Arquette’s maniacal cop hating killer to Nikea Gamby-Turner’s no nonsense head nurse, 12 Hour Shift has an eclectic collection of characters that make this a lot of fun to watch.

Much like an actual 12 hour shift though, as one’s resolve to push through begins to fade the resolve of the audience may wear a tad thin as the proceedings drag on. It's not for a lack of energy, but more that certain aspects feel repetitious and character’s become a bit grating. Still, as an outside-the-box comedic thriller there’s just enough twists and turns in the final act to keep you engaged.

Brisk, bloody and hugely entertaining, 12 Hour Shift is yet another check in the win column for Brea Grant. The movie’s dark and twisted sense of humor helps to dull the senses to some of its less effective parts. This is one smuggled bag of organs with its heart in the right place.