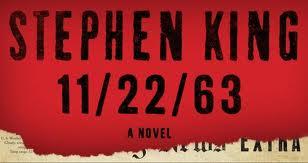 Is there anyone in the history of horror like Stephen King, anyone who has been so relevant in the genre for so long? I almost said “anyone who has been so good for so long.” Let’s be honest, though, he’s put out some clunkers in his time as well as more than a few novels that have been only average (“Under the Dome” anyone?). But when he’s on he’s on, and his best work sits on a pillar with the very best horror has to offer. “11/22/63,” published in 2011, was touted by critics as his strongest in years. And for the most part, it is. Despite some stumbles along the way, “11/22/63” is a very good novel, with a few sections that reminded me of vintage King.

The protagonist of the novel, Jake Epping, is a typical King character—an English teacher who is watching life pass him by. In Epping’s case he is also fresh from a divorce and spends a lot of time in a rundown diner where he discovers a portal to travel back in time. While time travel stories are about as rare as novels about the zombie apocalypse these days, King lays down some rules to his time travel world that make his story fresh. Epping is able to go from his present (2011) to September 9, 1958—and only that one time. He can return at any time by stepping back through the portal, and no matter how long he’s been in the past (days, months, years), only two minutes have gone by in the present. If he returns to the past again, however, the universe hits a “reset” button and everything he did in his last voyage will have been undone and he’ll have to start all over again.

And Epping has some work to do. After a series of smaller missions, he sets out to stop the assassination of John F. Kennedy, thinking this one change would in turn save Martin Luther King and stop the Vietnam War. Epping adopts a new identity and builds a life in 1958. As King gets us closer to November 22, 1963, we learn that Epping’s antagonist is the past itself. King’s world isn’t random, but rather a large inflexible machine (as he reminds us over and over throughout the novel, “the past is obdurate”). What will happen if Epping starts tinkering with pieces of the past?

Some of King’s best writing in years is on display in “11/22/63.” He paints a picture of the late fifties and early sixties that seems strikingly real. One of King’s best skills as a writer is to avoid nostalgic glitz and glamour and focus on the gritty reality of everyday people going about their lives. This isn’t the sixties of “Mad Men,” where everyone is wearing a crisp suit and waiting for cocktail hour. King doesn’t shy away from the problems of the past, and he should be applauded for this realism.

Unfortunately, as the book draws to a close it also begins to drag. King becomes an investigator, drawing out every detail in the Kennedy assassination as Epping determines whether Kennedy was killed by a lone gunman or a mass conspiracy, and then tries to stop the assassination. And my word, does he investigate. At nearly 850 pages, King could have used an editor to perhaps chop 50 to 100 pages from this novel. But the ending is worth slogging through these pages, so it’s a minor criticism.

As you’ve probably realized by now, this is not a horror novel. King has written an epic that is many things: science fiction novel, statement on our past versus our present, an ode to the America King grew up in. But it’s not horrifying. There are two small sections of “11/22/63” that were terrifying. They both grabbed me by the jugular and reminded me of the King of old, they made me wish the man would just roll up his sleeves and do another terrifying supernatural novel. We may have one September, 2013, when King has announced he will release a sequel to the “Shining.” Shall we start counting down now?