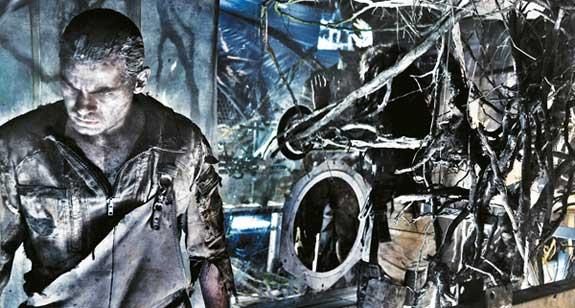 A man; by himself, pitch black surroundings. He has no idea where he his, who he is, or how he got there. All that can be seen is a random strobing light. As he gropes around through the dark, he comes across the corpse of another man. More of a dried husk than a corpse really. He continues to pick his way through the rocky darkness in search of the source of the strobing light. Soon, he stumbles on the broken down remains of some kind of base or fortification in the depths of the cave. As he prods about, he activates a large wall sized view screen. Various voices in a multitude of languages assault him until he is able to focus in on the English speaking voice, which says to him; "Welcome to Eden Log".

With the basic plot setup and the imagery packed into the cover of "Eden Log", my curiosity was instantly peaked. Billed as a science fiction/horror/thriller hybrid, they manage to get most of it right. I say most because there is a large section of this film that I have yet to figure out. Such is the nature of "Eden Log". This is why I would call a "hard" science fiction type movie rather than any form of horror or thriller, the movie was both fascinating and frustrating all the same.

For the fascinating, you simply need to peruse the DVD cover for a taste of what is stored inside. Vesteil employs a masterful use of black and white aesthetics and beautiful vistas, all laid out in a claustrophobic space. It's a look that manages to make the world of "Eden Log" entirely unique. A key element to the movie is the bizarre root system prominently displayed on the cover. These roots are a recurring piece of imagery that play a key role in the story and are used well in both powerful and subtle ways.

We join our nameless amnesiac as he starts his climb through the wastes of Eden Log. Along the way we are given minute bits of information regarding what these roots are. As he climbs through to the light of day, we're also given scraps regarding who our main character is and how he came to find himself in the depths of the cave.

This slow reveal works well in keeping a hold of the viewer's interest. It gives you just enough to lead you on, all in a very "carrot dangled before the horse" type of way. As this goes on, it does make the movie feel somewhat slow and plodding at times. The key to enjoyment however is thinking of this movie as good old fashioned "hard science fiction" film, such as the work of authors like Vernor Vinge. It's not action/sci-fi, it's not horror/sci-fi. It's heavy duty in the sense that there is some strange, real science going on, and that science becomes the focus of "Eden Log", as opposed to jump scares and characters. We experience the character development alongside the main character; he knows as little or as much as we do at any given moment.

"Eden Log" works great but it is an acquired taste. It is slow and dream-like in its unraveling plot. Much of it is convoluted and sometimes confusing which lends to the "hard science fiction" feel as well; if you are in the right mood for such a film though, it works; to a point. Sadly, if you've kept up it all begins to fall apart in the final ten minutes of the movie. Where the film started out feeling like a sci-fi film with an art-house flair, the final ten minutes is filled with nothing but typical art-house confusion. The plot takes a u-turn and jets straight for "what the hell" territory. For me, the ending was nonsensical and full of nothing but unexplained symbolism, which turns the film from "pretty neat" to "holy hell" pretty quickly.

For fans of hard-core science fiction, "Eden Log" is worth checking out. This film is not for everyone. Many viewers will find much to hate amongst the confusion, slow pace and pretentious cinematography. However, for those of us out there with a taste for the strange, this one is passable with the exception of that final scene.

Have you seen "Eden Log" and got the ending figured out? Please tell me. It keeps me awake at night!