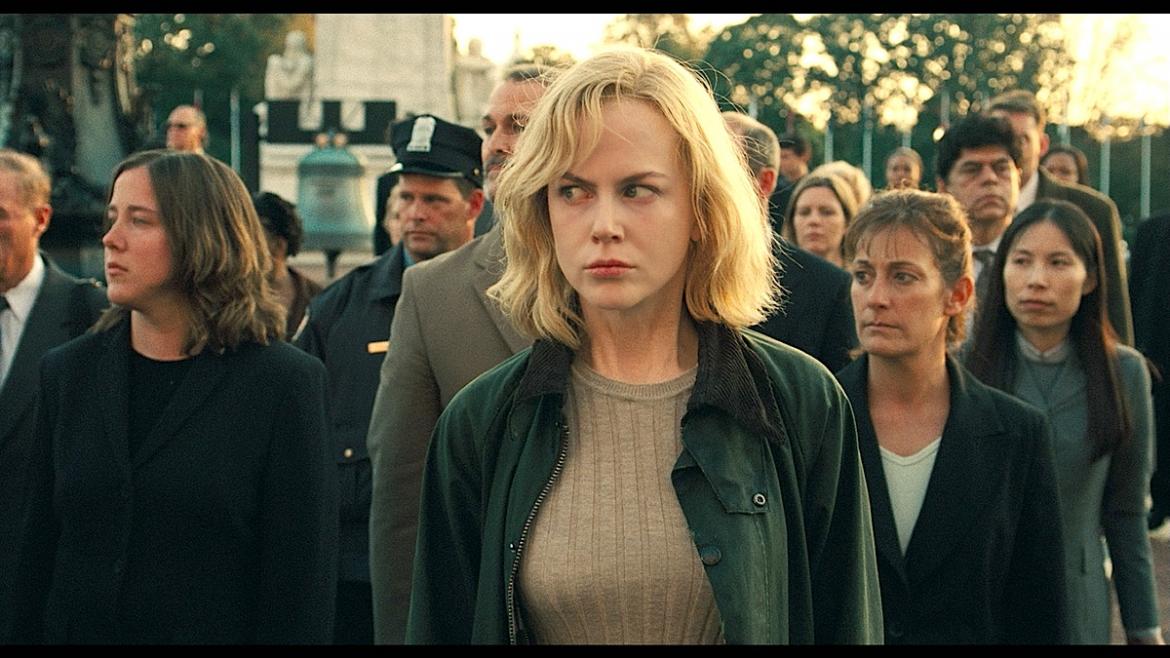 I can't say that I had any interest in checking out "Invasion" before the release. In fact, the only reason I went to see it today is because I couldn't sucker any of the other staff writers into "taking one for the team." The joke's on them though, because despite winning the award for the most pointless remake ever, "Invasion" still manages to be a nice little summer treat.

The plot, of course, is well worn territory. Don't let Warner Brothers fool you, this is a remake, almost to the "T" of "Invasion of the Body Snatchers." The virus, the transmission, not showing emotion, falling asleep, it's all here. The film stars Tom Cruise cast-off Nichole Kidman as a psychologist, single mother, and crush object of a fellow doctor (Daniel Craig, James Bond). After first seeing a flash glimpse of the end of the film, we are then shot into space where we see a NASA shuttle explode upon re-entry to the atmosphere. Then we see quick shots of newscasts telling the story of the wreckage, and how the sites have been cordoned off because of feared contamination.

Before you know it, it becomes apparent to a scientist friend of Kidman's that there is some type of strange Alien "virus" that seems to be popping up across the country. It's not long (thankfully) before Kidman begins to see the link between this strange virus and the increasing amounts of strange activity on the streets of her city. People are acting cold, unemotional, and her patients are dropping like flies. Before long the problem has spiraled into an all out epidemic. Kidman has been seperated from her son when she finally figures it all out, and we learn that he seems to have a natural immunity to the virus. The rest of the film sees each side of this conflict seeking to find the boy, because he seemingly holds within his DNA the answer to winning the war.

"Invasion" moves at a brisk pace, and it's a good thing for a jaded horror fan, because there is nothing really "new" that this remake brings to the table. It's simply a big budget retelling of the original source material, with a few twists thrown in to try and differentiate itself from said material. Which is not to say that it isn't good, because I was pleasantly surprised at how fun and eerie it turned out to be.

I can't hate on anything Kidman does, and she's appropriately sympathetic here. You WILL be rooting for her, even if she's an odd choice for this role considering the fact that she's incapable of not looking emotional. Think of that while you're watching the movie and it should afford you a few laughs. The one thing that I truly thought was unique and interesting about this version was the philosophical and political tones to the script. Knowing the Wachowski's were involved in reshoots this doesn't come as a surprise.

I really connected with the paradox that we fear these aliens so much, and yet what they offer us is true peace. As the invasion ramps up, there are sprinkled newscasts we see that show all of the world's conflicts coming to an end. If you follow politics and world events like I do, you'll appreciate the sly little nods to current events, such as when they announce an historic accord between Venezuela and the United States. I'm sure that will happen soon. There are also some nods to the Iraq war, a subject that it's hard not to get philosophical about. Unfortunately, the filmmakers didn't think we were smart enough to get all of this, so they insisted on tacking on an asinine flashback voice-over at the end, just incase we were too dense to get the allegory.

The action was appropriately intense, scenarios passably believable (despite some truly boneheaded decisions by all of the main characters) and they even managed to stick in some Michael Bay-esque chase scenes (she's driving a flaming car!!). I found the film to be dark and foreboding, well edited and a breeze to sit through. It really makes me wonder what was wrong with the original cut. It's very rare to see a film given to other filmmakers after principal photography and have it turn out this coherent. I have a feeling there's a really fascinating story behind all this. Guess we'll have to wait for the DVD.

It's unfortunate that Warner Bros. chose this particular weekend to release this, as it will certainly get buried under the trifecta of "Rush Hour 3" "Superbad" and "The Bourne Ultimatum." It's got to make you question, why put all the effort into fixing your film if you're just going to bury it? Granted it's not a February release, but putting it in the summer is certainly suspect. This one has November written all over it. Nokia is going to be pissed, considering all of the heavy handed product placement throughout.

I'm getting sidetracked from the real point though, which is that you could do much worse than "Invasion." It took the original film(s), threw them in a blender with an "A list" actress and a Hollywood sized budget, blended well and ended up with a surprisingly good time. So I say give it a shot, before you inevitably forget that it even exists.