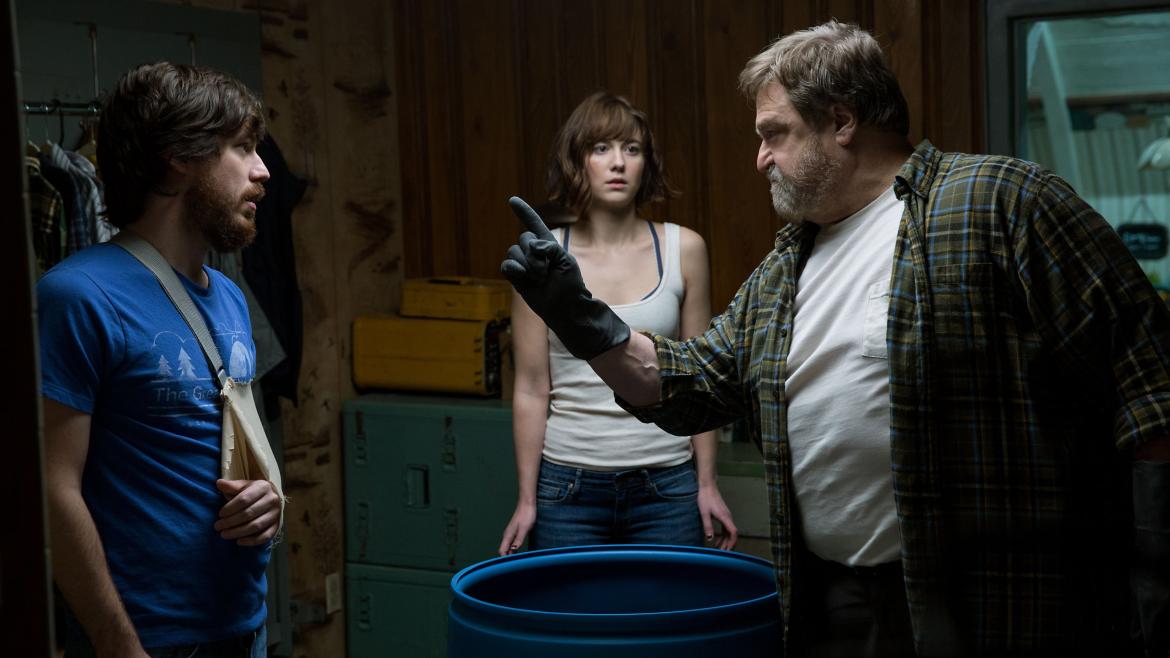 It’s 2016, and things seem swell. Civilization is placid and whole, our heroine’s biggest problem is that she’s leaving a bad relationship--hell, the opening shot is an intact bridge. It’s in Louisiana, not New York, but filmmakers, we get your point. A smart phone alerts us that this definitely isn’t a prequel, or even a concurrent ‘companion’ piece, to 2008’s Manhattan-stomping Cloverfield, so: okay, “blood relative,” what are you, exactly?

The trailer for 10 Cloverfield Lane has producer JJ Abrams’s fingerprints all over it, but it recalls none of his projects more than Lost: specifically, season 2’s Mama Cassified mystery-man-in-a-bunker cold open, which took a story the audience thought it was familiar with and wrenched the whole thing inside out. It’s a good way to approach this film, which unexpectedly transforms the original’s metaphors for terrorism in the 21st century into their mystifying cousin: fanciful rural paranoia. (To put it another way, if Cloverfield is suggestive of September 11, 10 Cloverfield Lane is a movie for southern hometowns like mine, pop. 30,000, who briefly convinced themselves Al-Qaeda was coming for their Raytheon plant).

After surviving a harrowing car accident, Michelle (Mary Elizabeth Winstead) wakes up in a windowless room, IV drip in one arm, chained to a pipe. She’s the “guest” of a former naval officer and prepper named Howard (John Goodman), who claims that while she was out cold, the apocalypse struck, and he saved her by bringing her to his fallout shelter. He explains that their neck of the woods (that’d be Lake Charles, LA), probably the whole country, maybe even the whole world, has been subject to attack by Russians. Or Martians. Or something. If she and her fellow captive, Emmett (John Gallagher Jr.) try to leave at any point in the next two years, they’ll surely die. The problem for Michelle, and the audience, is that he’s obviously lying, even deranged. On her side, she’s trapped with a madman. For us---uhhh, wasn’t this supposed to be a Cloverfield movie?

10 Cloverfield Lane knows that you see the conventional twists coming, or at least you think you do, so it spends as much time hiding one hand behind its back as it does distracting you with surprising reveals spaced evenly every few scenes. Trying to stay one step ahead of the plot is like batting away a constant barrage of artillery, and a lot of it is tense, hands in front of your face fun. While you’re watching it, some of the early scenes feel unimaginative. Moments that beg to be more suspenseful have awkward pauses, square composition, even a discomfiting humor. But when the action really accelerates it’s clear that this was all a gambit, a way to mimic the mind numbing dullness of a two year sentence in a bunker and to throw even the keenest viewer totally off their game (and don't forget that the first twenty minutes of Cloverfield were essentially and deliberately the worst mumblecore movie ever made).

In a pivotal early moment, Michelle finds herself trapped in a vestibule with the increasingly creepy Howard behind her, and in front of her---well, let’s just say that 10 Cloverfield Lane manages to have its cake, and it eat, too, and nobody’s given easy choices. The movie may scorn men like Howard, but it’s got a soft spot for the Michelles and the Emmetts of the world, people whose lives (as Emmett puts it) are confined to a “40 mile radius”. If the movie has anything to say on this point, it’s that modern life may have its share of terrors, but suffocating fear is considerably worse.

The movie’s finale, with its obligatory Cloverfield connections, is sure to divide fans into two camps: those who think it ruined a perfectly good psychological thriller, and those who think it was too little, too strange, too late. Personally, I’m glad director Dan Trachtenberg swung for the back fence, even if I’m still not entirely sure where it landed. As far as the franchise goes, we’re smack in the middle of that familiar Abramsesque territory where questions forever outweigh the answers. But on its own terms, 10 Cloverfield Lane is an original, sickening excavation of distrust and paranoia, a blood relative to us all.