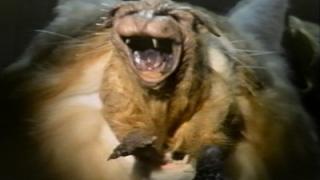 One of the stars of "The Sarah Connor Chronicles", Thomas Dekker has signed on to co-star in Platinum Dunes' "A Nightmare on Elm St." remake. A self described horror fan, Dekker will share on screen time with the other male lead, Kyle Gallner from "The Haunting in Connecticut".

New UK quad for Sam Raimi's "Drag Me To Hell", revamped with lots of shiny new pull-quotes. Not sure I feel good about the biggest one being "Ain't It Cool News" (does anyone really read that site?), but it seems that the buzz is starting out good nonetheless. The film hits theaters May 29th.

New pic from "H2", showing Myers stabbing the crap out of someone in what appears to be a hospital. Zombie has said that only a brief portion of the film will take place in the hospital, and that it will not be a direct remake of 1981's "Halloween II".

I know we shouldn't encourage the guys over at Asylum, known for their terrible, awful little movies with blatantly ripped-off titles, but I just can't help it. Here's the teaser trailer for "The Terminators", which hits DVD April 28th.

"Wrong Turn 3" director Declan O'brien to remake "Little Shop of Horrors", with help from "Bourne" producer. Nope, not making that up. He also says he'll be "taking it in a different direction". Not sure what that means, but feel free to speculate wildly in the comments.

Patrick Tatopoulos to direct adaptation of the forthcoming comic book "I, Frankenstein". The story shows old school monsters who have evolved and are living in a modern film-noir setting.