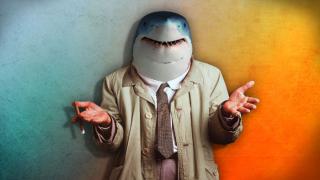 You'll Never Guess What "Sharklumbo" is All About...Unless You Already Did

Jon Favreau says his new film "Cowboys and Aliens" actually has some horror tossed in there despite the trailers not really showing much to make you believe this. He then made a bunch of "Swingers" references, said "Vegas Baby, Vegas" and did some swing dancing. That guy just won't let it go.

Good news nerds! Jeri Ryan isn't dead. In fact she's landed the role of Sonya in the the upcoming "Mortal Kombat" web series, which apparently is a role she's played before. Gwyneth Paltrow, Angelina Jolie and Cher all tried out for the role but Mrs. Ryan landed it. Congrats! I'm completely BSing about everything except her being alive and getting the part.

Here's a new poster and some stills from the upcoming Australian shark flick titled "The Reef". Honestly I think most of these are just screen grabs from shark week but still they look pretty cool. Sharks = awesome. That's math folks, look it up in a book or something.

Ever wonder what would of happened if Victor Frankenstein's journal got into the hands of the Nazis during World War 2? Sure, we all have. Well ladies and gentlemen I give you the trailer for "Frankenstein's Army" which finally answers your questions. At least I think it does, the trailer plays more like some weird German art student's final project. I think I saw a monkey painting a landscape on a horse. Weird stuff man.