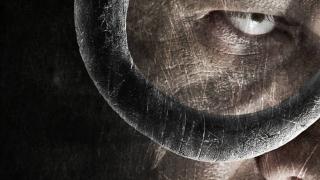 I'm very excited to announce that the PA who is responsible for updating Slash's twitter account recently decided to start following us. For that reason alone I have nothing bad to say about "Nothing Left to Fear", a new horror flick that Slash is producing about a family who moves into a small town only to find they're a part of a strange ritual. I will however mock Canada, which will now be able to see the film thanks to Raven Banner which recently picked up the rights to distribute the film up in America's hat. I mean I'm not going to do it here. I just want it to be known that I will mock them.

Remember the 2006 film "See No Evil"? That's right it's that movie you saw on the selves and thought, "hey isn't that Kane from the WWF?!" and then moved on. Well it looks like the powers that be have decided the film needs a sequel and that it needs to be directed by Jen and Sylvia Soska AKA the Twisted Twins. For those of you keeping track at home the duo was responsible for "American Mary", which we all went gaga over on the podcast recently. So I have no idea what the hell is going to come out of it but I'm 99% sure Mark is going to love it.

While nothing is confirmed there's some news out there in the interwebs that Carey and Chad Hayes, the brothers who wrote "The Conjuring", are looking at a story in the Warren archives about two sisters in England who were reportedly possessed in the late 70s for the follow up to this year's hit film. Isn't it nice that we've had two stories about twins in today's news? Makes me feel all warm inside. Also a little uncomfortable before twins are creepy as hell and unnatural.

I'm not saying this is right or wrong but it looks like the Weinstein company is asking that 20 minutes be cut from Bong Joon-ho's "Snowpiercer" before it hits US theaters. The reason for the request is that the company wants to make sure us folks in the midwest can understand the story, which focuses on a group of survivors traveling on a train after the world has frozen over. I mean the current running time is 126 minutes... so ya know... I'm not saying anything.