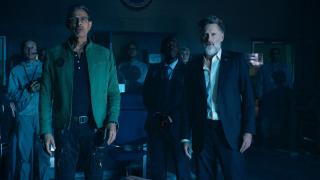 Keri Russell, who will always be Felicity to you and your cat, has been confirmed to be taking the lead in Scott Stewart's new film "Dark Skies". The film is about a family who finds they're being terrorized by aliens every night and can't seem to find any help. Maybe the aliens are pissed because she straightened her hair. or cut it or something. Isn't that something people flipped out about back when the show was on? Am I the only one who remembers this? I can't be. Don't judge.

I don't know anyone who's excited about "Dredd", the updated version of the comic book tale we all know and love from the Sylvester Stallone flick, but that isn't stopping writer Alex Garland from making a trilogy out of his tale. That is if the first film makes enough money. It's a bold move, to make a sequel to a film if it does really well, I can't wait to see how this plays out.

I for one am very excited that script writer Dean Devlin is saying hat he's working on a sequel to the 1996 hit "Independence Day". I know I've gone on a few rants about this movie and honestly I don't know where I left off. Let's just go with Vivica A. Fox is really hot and leave it at that.

Philip Seymour Hoffman has officially joined the cast of "The Hunger Games: Catching Fire", the second chapter in the Hunger games trilogy. He'll play Plutarch Heavensbee, the game maker who appears in the 2nd and 3rd book. If you don't know what a game maker is then I don't really want to be your friend.

Tina Majorino's mom goes to college! Haha get it? From "Napoleon Dynamite"? Is funny, no? Whatever, she's joined the cast of "True Blood" for the next season. I feel like we never have fun anymore.

I assumed "The Bunny Game" was some sort of adorable parody of "The Hunger Games" where rabbits battled to survive but apparently it's not. It's a new flick about a junkie hooker who's abducted by a truck driver and forced on a journey into nutsoland. Finally seeing a DVD release on July 17th the film has gotten a decent amount of attention due to its graphic content. And I'm guessing no bunnies. Come to think of it a bunch of rabbits killing each other might not be that adorable.

If you like Swedes, and who doesn't, you'll be happy to know that Swedish export Katia Winter has been added to the cast of the seventh season "Dexter" as a Russian stripper. Literally no one hates the Swedes, right? I mean that's the thing. Cheese, Swiss Miss, and getting along with everyone?

I've seen "Independence Day" more times then I can count and have eventually come to the conclusion that I really like the film. I've grown to accept Will Smith as a person and I can't deny Vivica A. Fox as a stripper. It was a long road and I think I'm a better person now having said that. It's being released in theaters next year in fully remastered, 3D glory on July 3rd. I probably won't see it.

Excited about the big screen adaptation of "The Hunger Games"? Want to see a ridiculous amount of posters for the flick? Ever been in a Turkish prison? The answers to these questions and more are now online! Well the poster one... and the internet can't really answer for you. I'm so confused.

What in the sweet hell is going on with this flick? On top of "Pride & Prejudice & Zombies" not being able to find a leading lady it looks like Craig Gillespie has now become the 3rd director to leave the flick. Ya know for a while I thought this might be my big chance to take on a directing role for a film but now I'm starting to think I might pass too when Hollywood comes knocking.

Welcome to planet erf! That's right folks, it looks like not 1 but 2 sequels are in the works for the 1996 alien invasion flick "Independence Day". Word around campus is the films will tie into the first but can also stand alone so that means if you happen to be baked out of your mind at the Malta Drive In the last time you saw the movie you don't have to worry about what you might have missed while unsuccessfully attempting to hook up with a girl who you're 99% sure was just using you for a ride. Ya know... if that happened to you.

I'm predicting there will be a lot of nerds out there who will pay for a ticket to see "Mission: Impossible - Ghost Protocol" and leave having no idea what happened. Why? Because they're going to be showing a six-minute "The Dark Knight Rises" prologue in all Imax theaters before the flick. I also predict "Tower Heist" will be this year's "Gigli". That one's for you, Eric.

A few moons ago there was a rumor on the tubes that the fine people at universal Pictures were planning a sequel to the 2010 remake of "The Wolfman". Since that movie was horrible it sounded like a terrible idea. Now it looks like they're just scrapping the entire thing and doing a full on reboot that will go straight to DVD sometime next year. There's no way this can end well but I guess it can't do worse than shirtless Anthony Hopkins.

If you love things that are good, and if you don't I suggest you stop reading my news because you're going to hate it, than you're going to be tickled pink by the news that "Tucker and Dale Vs. Evil" has been picked up for distribution by the folks at Magnolia Pictures. Looks like the buddy horror romp will hit VOD on on August 26th and see a limited theatrical release on September 30th. So that's awesome news if you haven't already downloaded it from some virus filled site.

Get ready to get excited, kids! The first shots of season 2 of "The Walking Dead" are hitting the nets and they're chock full of zombie goodness. Namely some bloodshot eyed zombie women that I find strangely attractive. These are all such strange new feelings for me. While I try to figure this all out you can sit there and diddle yourself over the fact that season 2 will hit AMC this October.

"Do you have Asteroids?", "No but my dad does". Name the movie! Anyway it looks like Roland Emmerich, the guy who directed "Universal Soldier" and "Independence Day" might be locking himself in to do a big screen adaptation of the beloved 80's video game. I'm so confused by what I just wrote I don't even know how to be sarcastic about it.