house of the devil

If you're in the market for a new home and happen to have $2.1 million sitting around then why not move into the house from the original "Nightmare on Elm Street" film? I know what you're thinking though, West Hollywood, right? Who wants to live in California? Everyone is so damn annoying there, right? And all that traffic? Plus it's full of people from California. Well it does have a guest house also so maybe that outweighs all that other stuff.

If you don't like Colin Farrell then you're a jerk. There I said it. He's so damn charming I just don't get why anyone would dislike him. I bring him up because he's joined Anthony Hopkins in the cast of "Solace", a new flick about an FBI agent who reaches out to a retired psychic to help him track down a murderer. I could understand why you might not like Hopkins though. He comes off as kind of snooty.

Jocelin Donahue, who you might remember disliking after seeing "House of the Devil" has signed on to the cast of "Insidious: Chapter 2". She'll play a young Lorraine Lambert in the film, who I don't particularly remember from the original film but I'm going to go out on a limb and say she was a relative or something of the main characters and spooky stuff happened to her.

Blah blah blah Guillermo del Toro is doing another movie. It's going to be a new version of "The Secret Garden". It's about a garden that's secret and then all kinds of crazy del Toro stuff happens and we all go whoooo and then I ask where the hell the new "Haunted Mansion" movie that he's been talking about for years is. 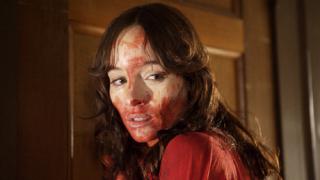 Joe joins us this week and we're all a bit divided over Ti West's "House of the Devil".

A Clip From "House of the Devil"