I'm not sure a logo is actually news but here's the new one for the "Evil Dead" reboot that will at least give people a chance to bitch about there being a reboot. The flick won't hit theaters till sometime in 2013 and if you're not in the know like I am the big twist on this update is that Ash, or whatever they're going to call him, is taking his sister to a cabin in the woods to help her kick her drug habit. That's going to make all the makeout scenes a lot weirder I bet.

I'm going to go ahead and say it. "True Blood" is the worst thing to ever happen to TV. Yeah yeah I know you think Snookie or whatever the hell her name is is hot but that doesn't change anything. So why do I still report on it you might ask? Well who the hell are you to question my selection of news items? Go to hell! Lucy Griffiths is joining the cast next year. She's British and will play Eric Northman's sister. Is that alright with you!?

Mr. Robert Englund has been confirmed for Syfy's next installment in the "Lake Placid" series currently titled "Lake Placid: The Final Chapter". If you couldn't have guessed by the title the good people at Syfy are saying this will be the last installment in the giant crock attack series. I assume there will be some sort of parade in Hollywood to celebrate all of this magic. Maybe a national day of mourning.

In other casting news, it looks like the walking corpse that is Alice Cooper has been cast in Tim Burton's big screen adaptation of the "Dark Shadows". Cooper will play himself in the flick which takes place in 1972. And I can't think of another good "he's really old" joke so just make up your own here. 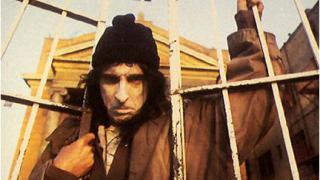