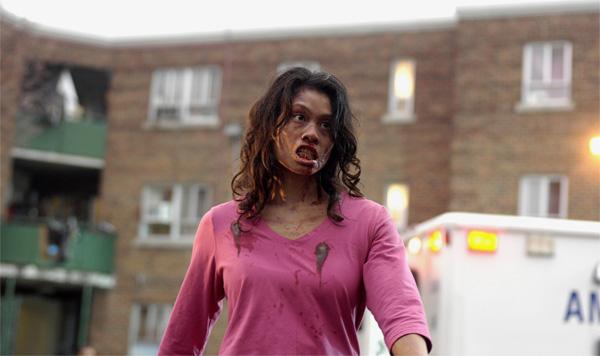 The Horror Of February

As I continue to sit here and reminisce about the experience I had with "Cloverfield" this past Friday night, a certain feeling is beginning to sink in that I'm not entirely fond of. It's the feeling that, despite the plethora of movies that will be released this year, we may have already seen the best that 2008 has to offer.

It's almost an accepted fact these days. The year starts out with awful horror films that the studios are trying to dump, and doesn't usually pick up until the end of the summer season, when one studio or another has positioned one of their horror flicks in order to capture that elusive late-summer fear flick audience.

This time however, we came straight out of the gate, 18 days into this fledgling year with what I would describe as one of the best horror films ever made. 18 days is all it took for me to be blown away, and unfortunately, I'm guessing I will go 347 without reaching these heights again.

So, in an effort to explore this theory, I would like to look a bit ahead at what we're going to see this year. For now, let's just start with February, shall we?

Just two weeks from now on February 1st, we will finally be able to see the American remake of the Japanese classic "The Eye" (trailer). The original "The Eye," a 2004 film by the highly talented Pang Brothers, was perhaps one of the best films to come out of the J-Horror boom. It's also, for all intents and purposes, one of the last high quality films to come out of said boom. As we have seen over the last few years, so-called "J Horror" has become an incredibly tired genre.

Which is what makes this remake so tragic. The source material for this film is fantastic, and if they had gotten on this remake perhaps 3 years ago, they might be releasing it to an audience that still cares. But if the recent debacle that was the remake of Takashi Miike's "One Missed Call" (infamous for an opening weekend score of "0" on Rotten Tomatoes) is any indicator, things may not go so great for "The Eye." Sure, it has Jessica Alba as it's lead (and her glistening booty), which is almost guaranteed to bring in the teenage boy crowd (and me, for that matter), but it has many other things going against it.

The film has undergone copious amounts of reshoots (under two directors no less) and a plethora of date changes that give me the strong feeling that the studio is not terribly confident in the film. Add this to the fact that it's been relegated to February - or what I like to call, "the month of misfit movies" - and you have a recipe for a box office disaster. This one may surprise us, but I wouldn't bet your house on it.

The next release after that? This one is a bit of a doozy. On February 15th we will all finally be able to judge George Romero's "Diary of the Dead" (trailer) for ourselves. The film, which was almost finished shooting before anyone knew of it's existence, is a "Dead Trilogy" take on our viral video society. It follows a group of college students who use their video equipment to literally make a video "Diary" of a zombie outbreak.

Considering that "Cloverfield" has been such a high profile film these last few days (and will most likely still be by the time "Diary" comes out) I would venture to say that Romero is going to have problems with mainstream audiences. Sure, horror fans will be first in line waiting to gobble up his latest zombie opus, but Joe movie-goer - who as we have discussed is the guy who earns these films money - may not be so excited about jumping into another "Shaky Cam" massacre.

Keep your eye on this release date, because early last week there was a rumor that the film was being pushed back to May, that was later "debunked" by Weinstein Co. Looking at the schedule however, May could possibly be a much better slot for this film. Considering that "Cloverfield" raked up this weekend, I'm thinking that this one may be shifted.

And as enjoyable as this could potentially be (I'm one of the few fans of "Land of the Dead") I highly doubt Romero and his modest budget will be able to out-action J.J. Abrams and crew. For that reason, Romero and the Weinstein's may want to distance themselves as far as they can from "Cloverfield."

Related Content:
Cloverfield
Diary of the Dead
The Eye