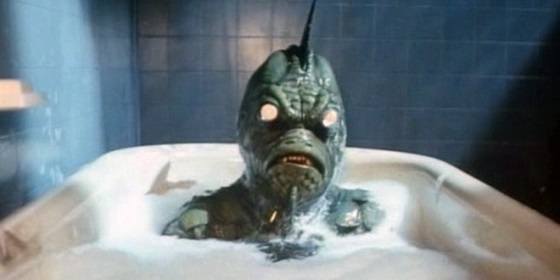 Son of the Needlessly Obscure Halloween Costumes for Horror Hipsters

Ah, the dawning of yet another fine October morn is upon us. With many a Monster Mash on the horizon it is yet again time to educate the masses on your ridiculously obscure horror hipster knowledge with a fresh batch of fantastic costumes.

Dick Miller is one of the all time great character actors. If it's a cult film from the 1980s then he most likely had a bit part in it. From Terminator to Gremlins, Miller was an iconic presence of the era. What you might not know is that for the majority of those bit parts he was credited as Walter Paisley, the character he played in the iconic Roger Corman film 'Bucket of Blood', Miller's only starring role. Many directors loved to pay homage to his small yet memorable roles. So if you want to dress up as the Janitor from Chopping Mall, the occult book salesman from The Howling or eight other roles from his career they all fall under the same name. All of these costumes are relatively easy to pull off so this would be a great tactic if you have a lot of parties to attend. For each party you can dress as a different Walter Paisley to really confuse your friends.

Everyone knows and loves Elvira, Mistress of the Dark. What has seemingly been lost to time is the fact that Elvira was directly inspired by classic horror hostess Maila Nurma, who in turn was inspired by Morticia Addams from The Addams Family. Cassandra Peterson actually took over after Nurma left a 1981 revival of Vampira which lead directly to Elvira. Morticia and Elvira have remained in pop culture, however Vampira has unfortunately been lost to time. To dress as Vampira all you need to do is buy an Elvira or Morticia costume and just become incredibly offended every time someone misnames your chosen moniker for the evening.

William Shatner in The Devil's Rain:

It's fairly common knowledge at this point that the original Michael Myers mask from Halloween was a Captain Kirk mask painted white. However, what is slightly less known is that the mold for said mask has its origins in the 1975 cult film The Devil's Rain. Don Post Studios did the mould for the sequence where Shatner becomes an eyeless victim of a cult ritual. This same mould was used for the Captain Kirk mask that cinemas most iconic killer uses to stalk babysitters. As such this is the ultimate in obscure costumes because people will be very confused as to why you couldn't shell out the money to buy a properly coloured Michael Myers mask and the people who know the Shatner connection will mistake you for Captain Kirk. In hipster obnoxiousness this is an all time ace in the hole costume.

In 1931 the cinemas reacquainted with Dr. Victor Frankenstein and his monstrous creation. He also had help picking up some of the parts in order to fulfill his defiance to god; a hunchbacked assistant named...FRITZ. Yes that's right in the first movie FRITZ is the assistant not Igor. Igor the character would not appear until Son of Frankenstein where he was played by the great Bela Lugosi. It's unclear where in the pop culture timeline they decided to phase out poor Fritz and turn him into Igor, although the Mel Brooks parody Young Frankenstein may be the culprit. Needless to say this costume involves exactly what the costume for Igor would involve, but you need to be ABSOLUTELY BESIDE YOURSELF when someone calls you Igor. Extra points if you grab yourself a brain in a jar that says “Abnormal”.

Creature from the Legally Distinct Lagoon:

Unlike Frankenstein, The Invisible Man, or Dracula The Creature from the Black Lagoon is not in the public domain or based on a novel. As such Universal owns the rights to the big, bad Gill Man, leading to his appearances in all non-universal media to be changed just enough to be legally distinct from Milicent Patrick's wonderful original design. This has resulted in drastically different looks like in The Monster Squad (which they legally had to redesign their creature because Universal was all in on that copyright) or it can lead to gender swaps like Undersea Gal (the official character name) in The Nightmare Before Christmas. Maybe you want to be Gill Man who fucks ala The Shape of Water or perhaps you want to be that disgusting bathtub monstrosity from Saturday the 14th. The important part is that you are ALMOST The Creature from the Black Lagoon but alas you'll never quite match up to Milicent Patrick's brilliant original design. But, hey, at least you get to be a dick and tell this whole story to people at parties...so you have that going for you, I guess.

The first two Invisible Men have nearly identical designs however they do differ in attire and goggle choice. This getup allows the costumer to be as dubious and tricky as those aforementioned mad men and become the Vincent Price version from The Invisible Man Returns. Aside from being gloriously obscure it gives you the chance to rock your absolute best Vincent Price impression. Remember, every time you do an impression of Price a devil gets his horns, so you're making the world a better place.

Another year, another batch of costumes built to sow chaos into Halloween parties everywhere. No one shall be safe from the growing epidemic of annoying assholes who want nothing more in life than to explain their overly complicated Halloween costume to you. You're welcome world.